The Finals series lead is up for grabs as the Spurs and Heat face off in a pivotal Game 5 matchup.

I don't know how to put this, but, this next game is kind of a big deal. The Finals is tied at 2-2, and winning Game 5 is so, so crucial. Although it's possible for the San Antonio Spurs to go down 3-2 and still win two straight games to become the champions, it's a lot harder to do that on the road against the Miami Heat, than getting Game 5 in San Antonio and only have to take one on the road. Again, this is a big deal.

The turnover battle has been a decent indicator of who won each game in this series. More specifically, the amount of turnovers the Spurs have committed. In their two wins (Game 1 & 3), the Spurs committed a total of 18 turnovers. In their two losses (Game 2 & 4), the Spurs almost doubled that figure, turning the ball over 34 times. Turning the ball over against the Heat, especially live-ball turnovers, is a death sentence. Extra turnovers give them more opportunities to get out into transition, where LeBron and Dwyane Wade are terrific.

Although the Spurs have done a good enough job getting back on defense (Danny Green has been spectacular in transition defense, routinely making the right play to keep James and Wade from scoring), James and Wade are too good to keep giving them opportunities.

Stampler's Take: How do the Spurs get out of this one? 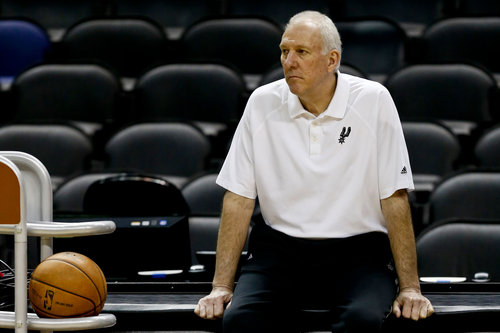 Game 4 was ugly and depressing. Everything looks bleak for the Spurs. Parker is playing hurt, Duncan can't string two plays together and Ginobili's a shell of himself. Meanwhile Miami's Big Three combined for 85 points. So ... it was all Diaw's fault, of course.

Game 4 was a great example of how well the Heat are able to play the passing lanes for turnovers. Whenever the Spurs would run pick-and roll, Miami would force Parker to the sideline (or if it's a side pick and roll they force him baseline) so he would have to pass to the rolling big man. From there, they would attack the rolling big man, usually Duncan or Splitter, right on the catch, hacking away at the ball. They forced the roller to make a quick decision of whether to kick out to a shooter or take a quick shot. Since taking quick, rushed shots isn't a part of the Spurs system, the decision usually made is to kick to a shooter. With Kawhi in the corner, Gary Neal, and Danny Green on fire from just about everywhere, that's easily the better choice. However, as you can see in this picture, the Heat adjusted to play the roll man one-on-one instead of collapsing on him, and put every one of their perimeter players in a passing lane ready to intercept the ball. 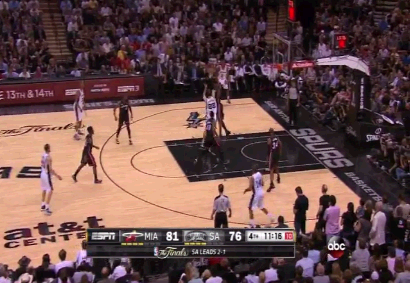 For Game 5, the Spurs have to be ready to face this again, and the big men have to be able to either make a little floater or take advantage of the space they have to work with in the post. They must minimize turnovers in this situation. Because the Heat are hacking at the ball on the catch, it might be wise to try and draw some fouls off of it. In case they can't score, the post players need to be more careful when passing outside. Notice in the picture how all of the Heat defenders are facing the roller, and have their backs turned to the shooters. The shooters outside can use that time to move around the arc a bit to get a better angle for a pass and a three.

Another thing I think needs to happen for the Spurs to win Game 5, is for Manu Ginobili to be more active offensively. I don't necessarily mean that he needs to play more minutes, because playing Gary Neal or Danny Green in his place has paid off. But, when he is on the floor, he he needs to be more active. So far in this series, he has been passive, and tried to let other guys score. That's admirable, and it's not like it's worked badly, because a lot of the guards have played well. But, it's not like the Heat have done anything special against him, and he hasn't made them have to. All the Heat do against Ginobili is trap him constantly on pick and rolls, and he makes a pass to the open player. In those situations that's been the right play, but it's led to him laying back on other offensive possessions.

A bulk of his shots come from beyond the three point line, and I think he can begin to attack them where he normally just swings the ball or shoots a three. They close out on him hard enough, and he has a seriously good pump fake that can get defenders to bite. He's also too wily with his first step to not try and do more than take a dribble step-back or a three. He doesn't have to shoot more, but attacking the closeout and getting into the paint more often would help so much. He's a great passer, and if they collapse on him he will find the open shooter. And, if the Heat stay on shooters as they did in Game 4, he's still a good finisher at the rim.

Game Prediction: The Spurs adjust and take Game 5 by 2 points.