Share All sharing options for: Rehash of Finals Game 4: Feeling trapped and betrayed

Yesterday's pregame in the arena was an interesting one for me. I had been fortunate enough to be granted an interview with Henry Abbott of ESPN's TrueHoop. But getting together with him and actually having the interview was a bit more of an adventure than I had expected. (More on this at a later date.)

As a result, my own pregame routine was knocked a bit off kilter, and too soon it was nearly time for tipoff. I approached the main elevator on the opposite side of the arena from where I usually sit, and was about to press the button when a voice called out to me from my right. He was dressed in the uniform of an arena employee, and he stood in what's probably the largest freight elevator I've ever seen.

"You can ride along with me," he said as he waved me over, and this was a welcome offer since I needed to get to the top as soon as possible. As I entered, I thanked him and watched a series of three different doors close us in. I told him I needed to go to the balcony level and he punched in my floor and started talking about what a crazy night it was. I got caught up in the conversation and when the three sets of doors opened, I started following him out of the elevator. He stopped me and pointed out that my floor was still a couple higher and I went back into the elevator as he disappeared from view. I stood there for a few seconds as nothing happened. 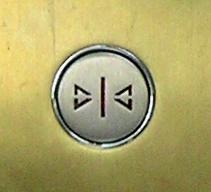 That's when I realized that I needed to hit the "door close" button, and did. I heard a sound, let go of the button, and nothing happened. I waited again, pressed the button again, heard the sound again, let go again, and nothing happened. About 30 feet away was a fairly helpful-looking woman about my mom's age, sitting at a desk facing me. She had a pleasant looking face, and so I gave her a little smile but she offered no help at all and I started feeling just a little bit weird. I didn't want to call the other elevator as that would delay me even further, but I didn't know what the man had done to get us to this level and the button didn't seem to be working.

And then, again, nothing happened.

That's when I realized that I was all alone, in an unfamiliar area of the arena, with probably no cell phone service, in an elevator that I was completely unfamiliar with. I'm not at all claustrophobic, but I can tell you that I started feeling pretty uncomfortable right about then.

That's the point at which the elevator started moving and carried me immediately to the floor that I needed to be on. I got to my seat next to Fred Silva, and started unpacking my laptop, thinking that the trapped feeling wouldn't bother me for the rest of the night.

Then the game happened; and once again the Spurs had troubles dealing with Miami's trap. And I spent the rest of the game in that stupid freight elevator, in spirit if not body.

I don't know. If I knew that I would have fixed it.

-Popovich in response to a question about what's wrong with Manu Ginobili.

Kawhi Leonard had two and-one opportunities last night. This is the first, though he missed the free throw.

Guarded by Dwayne Wade, Kawhi makes a quick fake to the left, followed by an immediate drive to the right, takes two dribbles, picks up the ball to avoid the steal attempt by Wade as LeBron James closes, absorbs the contact with Wade, takes two steps, hangs and swishes the ten-footer.

For extra enjoyment, check out LeBron immediately attempting to influence the refs into calling a travel instead of a foul, followed by his outstretched arms, pleading for reason.

By The Numbers (Symmetry edition)

@HPbasketball The ball has complex thought patterns and sometimes views the truth as a subjective construct.

You could hear the Heat fans in here after that play. Could smell their axe body spray too.

If this "no team loses two in a row thing" holds, boy am I freakin' glad the Spurs got Game 1.

Be sure to read Fred Silva's recap of Thursday night's game 4, if you haven't already.

My best friend is an actor out in LA. We've known each other for 15 years and we have been through some of the thickest and the thinnest that life has to offer. Earlier this week, he was treated to a surprise meeting by his business partners in what I can only call a pure and simple betrayal; that is the only word that fully encapsulates what happened to him.

When he told me the story of what these men did, when he shared how devastated he had been, I felt the way all of us do when someone close to us experiences a moment of pain, with empathy: I experienced the pain myself. It was unexpected; it was horrible; it was brutal. It was a betrayal.

Just like the one that Manu Ginobili has been experiencing throughout the playoffs. Make no mistake, his body is betraying him. Just like Tim Duncan in the 2011 playoffs, the plays he used to be able to make, he can still conceive, but he can't pull them off. The passes that he used to make with regularity, he can still see, but he can only complete them every once in a while. In game three, he showed quite a bit of spring in the two dunks that energized the crowd and got his teammates going. But in Game 4, there were no such high notes.

And way up near the nosebleeds where I watched Game 4, I had empathy for him. I experienced the pain myself. It was unexpected; it was horrible; it was brutal.

It was a betrayal.

Get back to the way they were playing in Games 1 and 3. Treat game five like it's the last of their season, because if they lose, it pretty much will be. Play with energy, focus, determination, and desire. Take it to Miami and let their aggression loose.