The Miami Heat still have not lost back to back games in these playoffs. Miami recovered from their Game 3 rout to win Game 4 in San Antonio and take back their home court advantage.

The Miami Heat played a nearly perfect game. Actually, let's just give them the perfect game nod. Lebron James, Dwyane Wade and Chris Bosh all played phenomenally scoring 85 points while converting a very efficient 37 of their 64 shots. The Heat got it done on both ends as they played a great defensive game, too. They tallied seven blocks and 13 steals in Game 4 as their pressure defense helped to create 19 Spurs' turnovers, which Miami turned into 23 points.

Even though Miami played so flawlessly, the Spurs stayed right with them for most of the game. The Spurs began the contest as they have every game so far this series, by jumping out to an early lead and forcing Miami to take a timeout. But just like in every game, Miami quickly answered. From there, it was a slug-fest and the Spurs trailed by three at the break.

In the second quarter, the Heat built a lead. They managed to get up by as many as ten points before the Spurs responded. Popovich subbed in Boris Diaw and he helped the Spurs to tie the game at intermission. Diaw had been seldom used up to this point in the series but was one of the few bright spots for San Antonio in Game 4. I'd expect to see his minutes increase moving forward. At half, it felt like the Spurs were very fortunate to be even. San Antonio turned the ball over nine times leading to 13 easy ones for the Heat.

In the third quarter, Miami did their best to pull away, but the Spurs kept battling. Miami built a nine point lead in the third and just when it seemed to be slipping away, Gary Neal and Danny Green each hit a three to close the gap to five going into the fourth.

In the final frame, the Spurs came unraveled. It was simply too much Heat in this game for the Spurs to have a chance in the final minutes. It got out of reach and with four minutes and change remaining, Pop threw in the towel. The Spurs ended up losing to the Heat 109-93, evening the series to two apiece.

He was awful. Off the opening tip, Tim knocked the ball to Tiago who promptly threw it back court to Tony. Over and back violation. Erik Spoelstra decided to start Mike Miller this game so Popovich gave Tiago Splitter the Dwyane Wade assignment. The first time Wade touched it he pump faked and Tiago jumped. This gave Wade two foul shots just so he could see the ball go through the net for free. Pop then benched Tiago, but he unfortunately gave him more minutes later in the game. In seven minutes Tiago was blocked at least twice, turned it over three times, missed all three of his shots and had a +/- of -11. Yuck.

The Spurs turned the ball over 19 times and the Heat scored 23 points off them. You can't turn the ball over against this Heat team. I know it. You know it. The Spurs know it. Miami uses turnovers to fuel all the other aspects of their game. It gives them an energy and tenacity that they otherwise seem to be missing.

He's in a shooting slump and is having difficulty finding any driving lanes in this Miami defense. It's definitely a problem. He only had one turnover and I thought he ran the offense fairly well. But overall, it's difficult for the Spurs to compete at a high level when he's struggling to hit a shot. I don't think it's his body failing him. In Game 3 he rose up way over the rim for one of his two dunks. I think it's a combination of his shooting slump and poor shot selection, which Miami's defense probably deserves some credit for. I think Manu's preference would be to get to the rim. I think Miami's defense is keeping him away with an effective combination of uncalled body checks and blows to Manu's arms as he attempts to penetrate.

He failed to score. In Game 3, Parker injured his hamstring but appeared to be fine in the first half of Game 4. Did it get cold and tight on him during halftime? It could be, but Gregg Popovich denied that was the case in his post-game remarks. He credited Miami's defense for shutting him down. Regardless of the cause, the Spurs will not survive this series if Parker goes entire halves without a bucket.

Tim was one of the few players for San Antonio that played well for the entire game. He finished with 20 points, but I think he could have had many more. The problem was that Miami's defense made entry passes very difficult for the Spurs to complete. Whenever Tim got the ball, good things happened. Hopefully, the coaching staff figures out a way to feed him the rock more often in Game 5.

I lost count of how many point-blank shots the Spurs missed. Some of them were blocked while others were just flubbed. It was agonizing to watch the Spurs offense generate great looks that somehow came up empty over and over again.

The Heat took and made the shots that the Spurs have been giving them all series. Lebron, Dwyane and Bosh all converted the typically low percentage looks at a very high rate. They scored 85 points. Making those midrange shots was a huge reason that the Heat seemed so unstoppable in Game 4.

Down 5 in the Fourth Quarter

The good news is that the Spurs can control all of those issues. It's on them to play better. Winning the Finals is going to require better performances than the one the Spurs gave in Game 4.

There are a few things that the Spurs can't control that went very poorly for them and contributed to the loss. The officials didn't help anything. I was sitting in the media section just in front of the Fan Zone so I didn't have the best angle, but there were a lot of momentum changing calls/noncalls that really helped the Heat control the game. Some of the Spurs' 19 turnovers were unforced, but many were the result of contact that could have been interpreted as a foul. 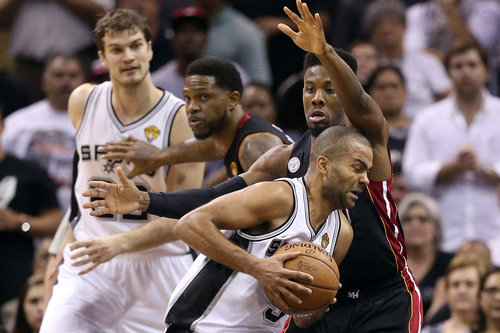 James, Wade and Bosh all were killing it from midrange. Those were the same contested long twos that all three missed in the first three games of the series. The Heat are a very difficult team to beat when they are converting those kinds of shots at a high rate. It'd be nice if the Heat reverted back to missing the contested two pointers in Game 5.

The series is now tied at two apiece, and there is plenty of basketball left to be played. Because of the obsolete 2-3-2 format, Game 5 will be in San Antonio. If the Spurs take care of business at home, they'll have two opportunities to win it all in Miami. We'll see what happens Sunday.