Heat bounce back, tie the series at two

Share All sharing options for: Heat bounce back, tie the series at two

The Miami Heat bounced back after an embarrassing Game Three loss by winning Game Four convincingly. Dwyane Wade came alive after a quiet start to the series, scoring 34 points, and Miami’s defense was just too smothering for the Spurs' shooters.

The Spurs managed to tie it up going into the break after trailing for most of the first half, and it looked they had taken the Heat’s best shot and survived thanks to Tony Parker’s 15 points. Wade and James combined for 29 and kept their team in it off jumpers and points off turnovers.

The Spurs, the Heat, Aristotle, and Alexander the Great 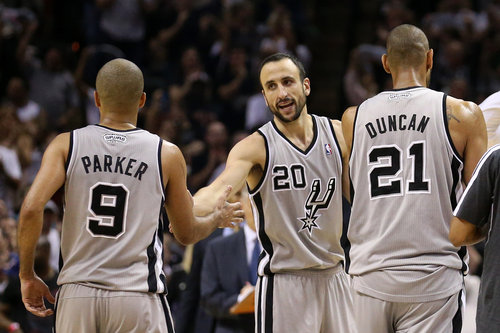 A fan's eye view of the Spurs franchise, and a look at whether they more resemble Aristotle, or Alexander the Great, and what that has to do with their current matchup against the Miami Heat.

Miami’s two wing stars kept it going in the third, with Bosh and Chalmers joining in on the fun. With Parker seeming a bit slower and Ginobili remaining ineffective, the Spurs just didn’t have the scoring to keep up and the defense just wasn’t there.

In the fourth the tendencies intensified and Miami imposed its will by playing smothering pressure D and causing multiple turnovers. Ultimately, the Heat upped their intensity on both sides and the Spurs just weren’t able to match it.