Neal, Green, Leonard and the Long Game of the Spurs

Want to know how you can spot someone who hasn't watched the Spurs all season? Listen to their hackneyed "Who's the heck is Gary Neal?" and "Where'd Danny Green come from?" comments. It'd be funny if it wasn't ... no, it's funny.

Share All sharing options for: Neal, Green, Leonard and the Long Game of the Spurs

Here's the thing to realize... that wasn't even Gary Neal's first 20-point game against the Heat this season.

Yes indeed, Pounders, Neal led the Spurs in scoring in that infamous Nov. 29 game at Miami where Pop sent the Big Three home early (plus Danny Green -- and Kawhi Leonard was already out injured). Sure, he was far less efficient scoring in that game, but the point remains, all the same, this isn't Neal's first rodeo in the spotlight. Remember this play in his rookie year?

To me, Tuesday's Game 3 was Exhibit A for why Gregg Popovich is one of the best coaches in NBA history. It's one thing to make in-game adjustments or to design a great defense to take away what LeBron James does best. And sure, everyone appreciates a great sideline out-of-bounds play to get Matt Bonner an open shot at the buzzer. Pop does that stuff as well as anybody. But really, his true genius is the way he sees the long game, the forest and the trees. A part of that stems from, his complete disregard of the fans and what they find "entertaining;" the media and their narratives, and the day-to-day standings of the interminably long regular season.

Gary Neal had six games of 20-plus points during the regular season, despite struggling all year long with Plantar Fasciitis and really playing like an urchin for much of it. For perspective's sake, Manu Ginobili had seven such outings all year.

This is why Pop's a thousand times better of a coach than someone like Mike D'Antoni, who prefers to have the 8-15 guys on his roster collecting cobwebs and picking splinters out of their rear ends. Pop's philosophy makes it possible for Neal to fearlessly chuck away in a NBA Finals, for guys like Green and Leonard to face legends like LeBron James and Dwyane Wade without blinking, because he puts them in positions like that throughout the season.

It's why [Popovich] looks like his dog died after some wins and why he's relatively serene after some losses. The important question isn't "did we win?", it's "did we get better?"

Neal has been in the system for awhile, but for Green and Leonard, these Finals has been a process two years in the making. I think a lot of times what we miss in our bottom-line, results-oriented culture is that there are hundreds of things that happen in each "meaningful" regular season game that have more importance in the big picture than the technicality of who happened to win or lose that night. If you've paid attention to Pop at all throughout the years, it's why he looks like his dog died after some wins and why he's relatively serene after some losses. The important question isn't "did we win?", it's "did we get better?"

Leonard showed some early flashes here and there during his rookie season, primarily on the defensive end of the floor, but his first true "breakout" game, in which we saw that "Oh my God, this kid can do things Bruce Bowen couldn't dream of," came against Portland in February of 2012, with the Big Three resting, in a game the Spurs lost by 40 points. (You'll also notice that Cory Joseph logged 37 minutes that night. No, he didn't play at all well, but that's not the point. It's that the Spurs played their 14th man 37 minutes in a game in which they weren't tanking for lottery balls.)

Fast-forward a year later, and you have Leonard just completely destroying the more-heralded Luol Deng at Chicago, again with Tim-Tony-Manu all resting, in a game where, Derrick Rose aside, the Bulls had their top lineup playing. A couple nights later he hit a buzzer-beating game-winning corner three to beat Cleveland. How many other contenders trust their fourth-best player to take that shot in that spot?

Green, meanwhile, is hardly a stranger to getting open looks against the Heat (or anyone else, really). Sure, he's hit 16-of-23 from downtown in the first three games of the Finals, but maybe the game that first gave Pop --or Green himself-- an idea of what was possible came last January at Miami, when he hit 6-of-7 from three. (Of note, the Spurs lost by 22 that day with LeBron James, Mike Miller and Mario Chalmers hitting 14-of-18 threes, with Miller making all six of his. I'm not sure he's ever missed a shot against the Spurs.)

Later that month a lineup of Green-Neal-Tiago Splitter-Matt Bonner-James Anderson rallied the Spurs from a 16-point deficit late in the third quarter at Dallas and Pop went with them the rest of the way after being disgusted with the ineffective play of his starters. The Spurs almost won the game in regulation on a Green shot that came a millisecond after the buzzer, and ended up losing by two in overtime, again riding that same five-man lineup.

Then there was that game in March, at OKC, where the Spurs almost blew a 63-36 lead, with the Thunder crawling to inside two points, 92-90, with nine minutes to go on a Kevin Durant dunk. Green kept them at bay, making one big shot after another when just about everyone else was tapped out, and scored 10 points in the fourth quarter.

All those experiences --and the lessons learned from wilting under the postseason glare of last year's WCF-- have helped form the so-called "role players" on the Spurs into the leading men you see today. Everyone 4-15 on the roster has had some measure of success during the past two seasons playing without the big three, and they've seen for themselves that if they just play smart and trust the system, they'll still be able to hang against the best players and teams in the league.

Obviously Pop has the luxury of job security that almost all of his peers do not have. Half of the coaches who made the playoffs this postseason have been handed their walking papers (and that doesn't even include D'Antoni, who should've been). For just about all of them winning the next game, treating Tuesday night at Milwaukee in December like it's Game 7 of the Finals, has to be the only thought because their jobs are on the line.

A coach like Scott Brooks is under tremendous pressure. You think he spends games worrying about the development of Perry Jones or Jeremy Lamb? No, because he had a contending, albeit not very deep, squad with two young superstars who were hellbent on capturing the top seed in the West. Then there's also the media and fan pressure, demanding that his starters stay on the court for 35-plus minutes every night to promote their brands. There are no such concerns in San Antonio.

Are you not entertained? 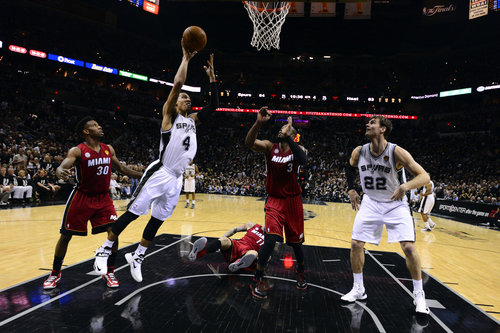 Game Three's onslaught of three pointers and made baskets seemed like an angry response by the Silver and Black to a nation who had until recently called them old and boring. The Spurs made like Russell Crowe in 'Gladiator' and asked...are you not entertained?

It also helps tremendously to have ego-less stars who are willing to sacrifice their numbers --even their contracts in some cases-- for the sake of winning. Duncan, Ginobili and Parker have all been perfectly willing to give up shots and not force anything because that's what the Heat defense is giving them. The pundits and talking heads might say that Parker and Ginobili had poor showings in Game 3, combining for just 13 points on 12 shots, but that just ignores the 14 assists. They don't see how Tony and Manu just made the right play over and over again instead of the hero-ball play. Duncan was fantastic in Game 3, but he had "only" 12 points on 11 shots. Go ahead, dismiss the Big Three for combining for just 25 points. See if they care.

The beautiful irony of Pop's master plan is this: In the regular season in any given game literally hundreds of things big and small matter more to him than whether the team won or not. The result is incidental, the process is everything. Because of this approach, he and his coaching staff and the front office have built a squad that's best equipped to be the "last team standing" in the postseason, when literally the only thing that matters is who wins the final game and the rest is just details.