We heard a lot about the Heat's pressure defense and for good reason; they terrorized teams with their aggressive style all year. But just like any defense, it has flaws that a smart and talented team can exploit.

Share All sharing options for: How the Spurs are using the Heat's defensive style to their advantage

Coming into the series, pretty much everyone agreed one of the keys would be assists and turnovers. Both teams do better when they share the ball and the Heat are terrifying in the open court after TOs. The Spurs won that battle on game one by limiting their mistakes to a minimum and gutting out a close win. In game two the Heat were able to play their game and won handily. What was missing in the series until game three was an instance of the Spurs playing their brand of basketball. Boy, did that change in the last match. Let's look at some plays that clearly illustrate that the Spurs can get quality shots against the Heat's defense if they do a couple of things.

Wait for the defense to show its cracks

We will look at two assist that come from the same setup. One will have Ginobili assisting Gary Neal for a three pointer and the other will have Manu hitting Tiago Splitter for a dunk. 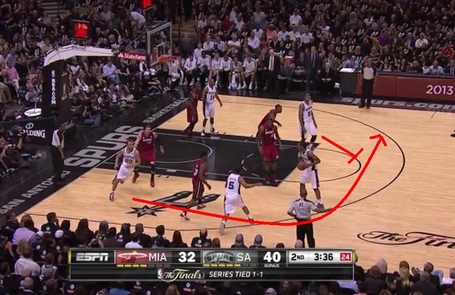 First, Manu receives a Cory Joseph screen on the left side and then a hand-off by Kawhi Leonard. Duncan will screen for him after the hand-off. 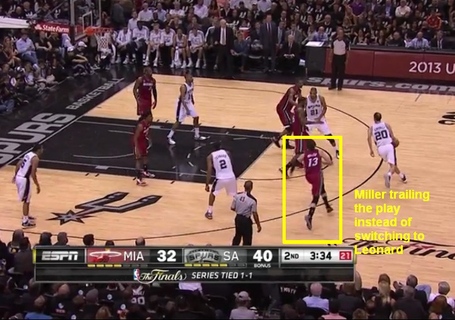 Since Manu's man, Miller, gets caught in those screens, James switches and is now shadowing Ginobili. Miller tries to recover instead of switching to Leonard. 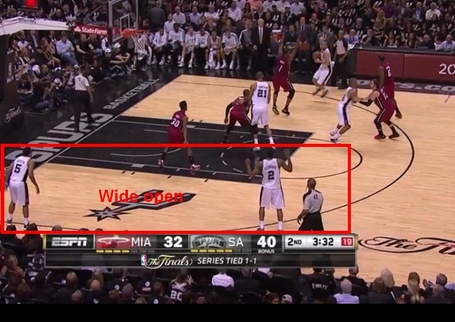 Ginobili has gone from one side to the other of the court using screens, which the Heat either switch or use to trap. He now has James and Bosh preparing to trap and Miller trying to recover while Neal sets yet another screen. The strong side is so overloaded that Joseph and Leonard are completely open on the weak side. 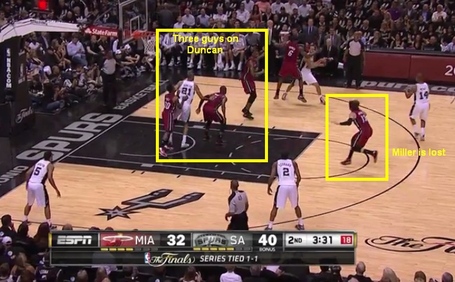 James has now recovered but Chris Bosh and Mike Miller realize that the weak side is completely exposed and try to get back. Neal sneaks his way to the three point line after disguising himself as a screener. The Heat had to make so many decisions on when to switch and who to rotate from that they are lost. Either Miller or Wade should have rotated back outside to Neal but because Bosh was helping, Duncan had two other guys on him. Manu passed to Neal and he hit the wide open three pointer.

The second play starts the same but from the opposite side. Manu is now on the right and Neal on the left corner. Manu is screened and gets a hand-off. 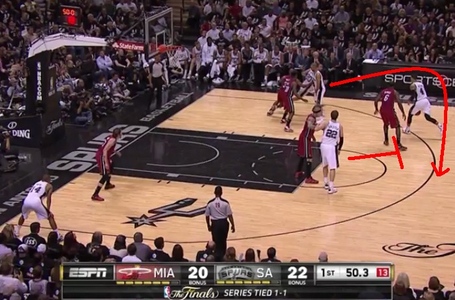 Lebron James doesn't switch here, which means he leaves Allen to trail Ginobili after the Splitter screen. What he and Cole are doing is play off Green and Parker momentarily to make Ginobili think twice about passing to Splitter if he rolls. The easy pass here seems to be to Danny Green outside. 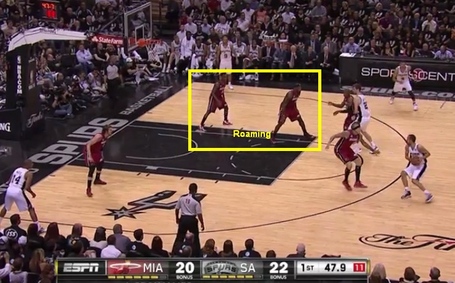 But as soon as Ginobili picks up his dribble James starts going back to Green, anticipating that was the pass Ginobili was going to make. Look at the clock from those two last stills. Less than a second has passed but what seemed to be an attempt from the Heat to pack the paint was just misdirection. They never intended to leave shooters open; they just wanted the Spurs to think they were. Manu waits and finds a wide open Splitter for a dunk. 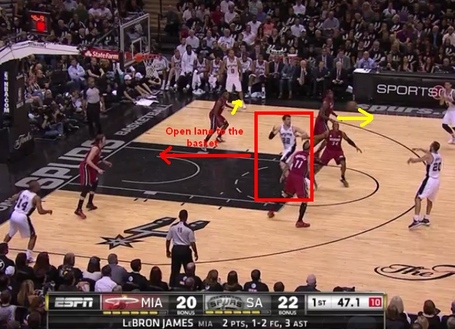 From those two plays you can see that the Spurs can use the Heat's defensive game plan to their advantage. By sending their switch and trap defense into overdrive, the Spurs can confuse Miami into giving open outside looks. And by waiting for a fraction of a second for the defenders to commit to guarding one opponent or the other instead of instantly reacting to the apparent intention of the defender, the Spurs can get inside buckets.

That's why I mentioned before that the Spurs needed to make some risky passes. It wasn't about taking some crazy gambles but about not rushing to take everything the defense concedes by design.

Revert the ball and attack from the weak side

The other thing the Spurs need to do is revert the ball. In game three there were a couple of great examples of why it works.

First, let's look at that glorious Manu dunk. Parker has walked the ball up court, passed to Bonner who passed to Leonard in the left wing. Parker will curl off a Duncan screen beneath the rim. 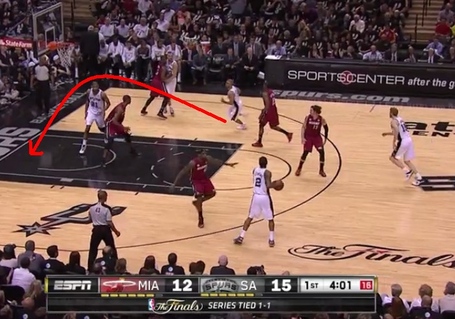 When Tony gets the ball, the Spurs go into what we fans reluctantly call "the RJ alley-oop play." Duncan is trying to set a screen for Leonard but James reads the play and is not caught in it. On the weak side, Ginobili is screening Bonner's guy to distract the defenders from helping on the alley opp to come. 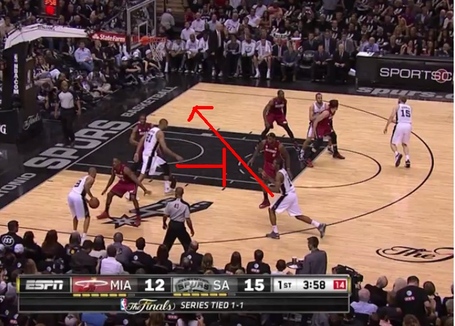 When it doesn't work, Duncan screens for Parker. Bosh and Chalmers try to trap Tony while Lebron patrols the paint and Wade gets ready to help in case Parker goes to his right and penetrates. The Heat do this a lot since they trust their speed closing out. Again, the ball side is overloaded while Miller has to take both Leonard and Bonner and Ginobili has some room. 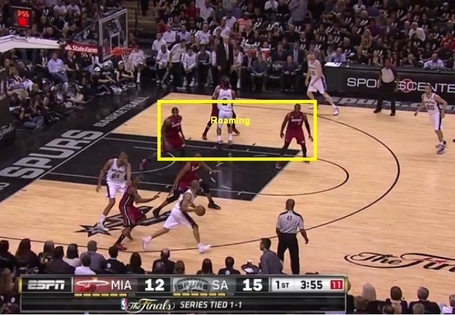 Tony passes to Manu. Now that the angle of attack has changed and the Spurs have two shooters on the strong side, James hurries back to his man and leaves the paint. Wade closes out but Manu pump fakes and drives to the rim unimpeded for a dunk. 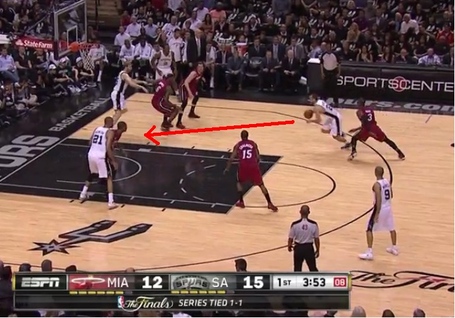 In this play, we see something very similar but with Ginobili as the ball handler. After a screen by Duncan, Miller and Bosh try to trap while Wade plays off his man to prevent the roll and Lebron patrols the paint. Again, the strong side is packed and the Heat are willing to gamble that they can recover if the ball is swung. 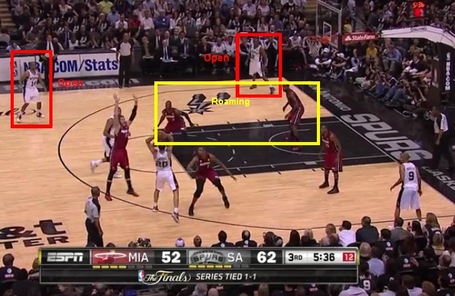 But when Manu passes to Neal, that leaves Lebron once again rushing to his man in the corner, leaving the paint unguarded. Wade again has to close out hard, which allows Neal to blow past him for a runner. 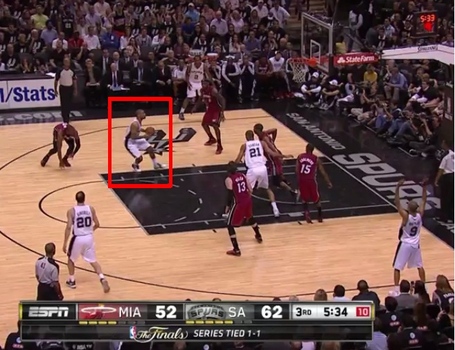 First, with Tony Parker and Manu Ginobili as playmakers, the Spurs truly are "a shooter's paradise," as our old friend ROMAJU called it. I would go as far as to calling it "a role player's paradise" since both guards can hit cutters and dive men as well.

Neal, Green, Leonard and the long game of the Spurs 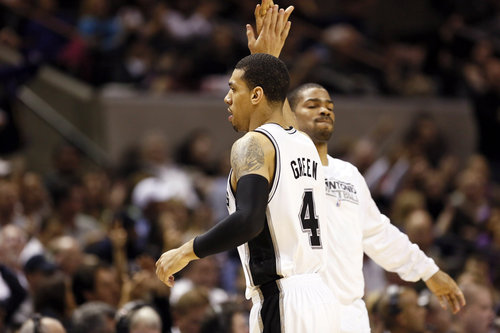 Want to know how you can spot someone who hasn't watched the Spurs all season? Listen to their hackneyed "Who's the heck is Gary Neal?" and "Where'd Danny Green come from?" comments. It'd be funny if it wasn't ... no, it's funny.

Secondly, when the Heat go small, they try to use that to their advantage by having the big hedge extremely hard or downright trap, and using Lebron's and Wade's speed and length to overload the strong side and recover to shooters. But when the ball is swung, a lot of space opens up to either pump fake and drive or set up another play, like a 1-3 pick and roll or a quick post up for Duncan off an entry pass from the corner. As you can see, the Spurs have ways to counter the high pressure Heat D. They just need to not settle for predictable and inconsequential passes and to change the point of attack after Miami over commits.