On a record-setting Tuesday night for the Spurs, here's an on-the-scene look at a number of things you didn't see on the broadcast, as well as a guess at just what was behind that epic shooting binge.

Share All sharing options for: Morning Rehash: San Antonio is a shooter's paradise

For me, the enduring image of this game is one of Lebron James out on the wing being guarded by Kawhi Leonard and dribbling, faking, juking (and getting no results whatsoever) before chucking up a jump shot. It reminded me of a story I once heard about a couple of kendo masters at a tournament who stood facing one another in their opening stance for what I heard was close to 15 minutes before the match was called a draw.

While I admit that the first time hearing this story I was completely unimpressed, after watching last night's game I kind of get it now. The two masters never moved because they knew that there is no such thing as a perfect attack, only a perfect opening position. And since each knew the other was a master, they recognized that their opponent would take advantage of any imperfect attack. Neither one of them wanted to put himself at risk, and so neither one of them made a move.

While this might be an acceptable way to draw a kendo tournament, it's not very effective in The Finals. I'm not going to suggest that this means anything for the series' remaining games, but last night it certainly appeared that someone had taken residence inside the cranium of the so-called King of the NBA, and it certainly wasn't a welcome guest. It's very hard to play well when someone's in your head, and with the way Kawhi's been playing defense so far, it just didn't appear that LeBron had much of an appetite for attacking our long-limbed 2nd year man.

Perhaps we'll find out that James isn't 100%. It wouldn't surprise me. Maybe he'll give an interview that'll shed some light on Tuesday's performance. I don't know what he will say about it. I just know that what I saw wasn't the player that took the league by storm this year. And there's certainly got to be a reason for it.

-Popovich in response to a question about how Tim Duncan can be so energetic at 37.

Kawhi "Coast to Coast" Leonard, grabs the rebound, dribbles around LeBron with a nice little Parker-esque hesitation, and drives into the lane for a classic Spurs floater.

@hpbasketball I did, it was the 2011 NBA Finals Miami Heat

Green got a flame thrower

Someone said Gary Neal is a cheat code

In honor of the otstanding shooting performances from Gary Neal and Danny Green, I'm doing two Game Bosses instead of the traditional Boss and Runt.

Tobias Harris, small forward for the Orlando Magic, tweeted that "cheat code" comment, and it's really the first time since the Game 1 of the second round series against the Warriors that I've seen a shooting display where every shot a player took looked like it was destined to hit the bottom of the net before it even left his hand. Only this time it was two players, as Green and Neal combined for 13-19 from behind the arc, good for over 68% -- not that percentages mean much of anything on a night when a couple of guys enter the zone so fully that any miss seems almost surreal.

But what if The Finals weren't really played out by men in front of an arena full of people, but instead was just a holographic projection of elite athletes who were hooked up to virtual-reality-motion-capture rigs, playing the sport like a video game? And suppose that there really was a code that could make it so that your shots fell at a way-above-average rate. What would the transcript of a chat session between two players who were sharing such a trick look like?

Neal: That was a little weird.

Neal: My timing was off on that three, but the system glitched just then and it went in anyway.

Green: That is weird. I can't remember the last time I got a glitch on one of these units.

Neal: Ever since that glitch I told you about, my balance numbers have been reading all weird. I checked them after that three I missed at the beginning of the quarter, and I was in the middle of resetting them when the ball swung to me and I had to take a shot.

Neal: So now my transverse is at negative 80 and the ecliptic is on 2.8.

Green: You're not going to hit another shot with those settings. Get it fixed right now!

Neal: That's just it, I shouldn't even be able to get anywhere close to the basket on this setting, but all the controls feel right, and I've made my last two. As weird as it sounds, I think I found a cheat code.

Green: I'm gonna try it. I've got my ecliptic on 2.8 now, and what did you say that transverse setting was?

Green: No way! This is freaking crazy.

Neal: Way to go, D. But mine's not working anymore.

Green: Mine wasn't either, so I just pushed them even further.

Neal: What do you mean?

Green: Every time before I take another three, I just give the ecliptic and transverse controls another nudge. I'm into the teens on the E, and the T is, I dunno, neg 1200 last I checked.

Neal: What? That should shut down your whole unit! How are you even moving?

Green: I'm telling you, G, we've found some sort of crack in the code. The normal settings don't apply right now. Just see how far you can push this thing!

Green: This is so much fun it should be against the rules!

Neal: Ha. It probably is!

Green: Hey, should we tell Bonner about this?

Both: NO! (uproarious laughter ensues)

The Spurs had used a 13-4 run, capped by a Kawhi Leonard run out for a fast break dunk, to build their first double digit lead of the Finals, 40-30 with 4:38 to go in the half. But that lead had evaporated as the Heat put together a 14-4 run of their own, tying the game at 44 with 37 seconds left in the second quarter.

But just as they had in Game 1, the Spurs closed the quarter strong. Parker hit a corner three, and Danny Green blocked LeBron James' jumper in the lane, starting a fast break that took 4.3 seconds. Duncan grabbed the rebound and got it ahead to Parker who found a streaking Gary Neal who pulled up right at the three point line and let it fly just before the buzzer sounded.

The shot was true, Miami's momentum was halted, the Spurs went into the locker room up by six. The game was never really close again.

By The Numbers (Symmetry edition)

(Neal scored 24 points in 25 minutes; good for one point per minute he played. I'm not sure which minute he was on the court that he didn't score a point for, but it's certain that he'll hear from Pop about it. )

Can anyone tell me what's going on in this picture? 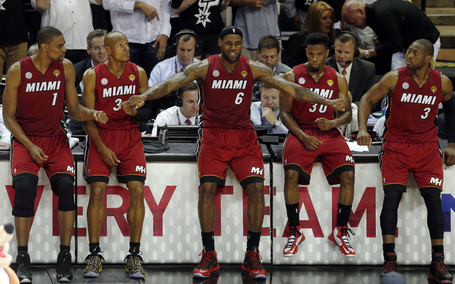 Keep it going. Miami looked both deflated and defeated at the end of Game 3, even more so than the Spurs did at the end of Game 2. I mean, at least the Spurs bench (including Tim Duncan) had James' block of Tiago Splitter to laugh at to ease the mood during the dark minutes of the Heat's run in Sunday's game. There wasn't any such levity happening Tuesday night in the vicinity of Erik Spoelstra, who left many of his starters in the game even after the contest was no longer in doubt even though the game seemed like a perfect opportunity to get them a rest.