The series is tied 1-1, with the next three in the Alamo City. Will the Spurs protect home court or will the Heat take their first series lead?

The San Antonio Spurs host the Miami Heat in Game 3 of the NBA Finals. This is the first of three straight games hosted at the AT&T Center, as the Finals have a 2-3-2 format. The Heat won Game 2 103-84, where despite LeBron James (17 points, most of which came in the 2nd half) having yet another off game due to Kawhi Leonard's defense, other players like Mario Chalmers (19 points) and Chris Bosh stepped up. Danny Green (17 points, 6-6 from the floor, 5-5 from 3) and Kawhi Leonard (9 points, 14 rebounds, 8 offensive) led the charge for San Antonio, while the Spurs' Big Three of Tim Duncan (9 points on 3-13 shooting, 11 rebounds), Tony Parker (13 points on 5-14 shooting, 5 assists and 5 turnovers) and Manu Ginobili (5 points on 2-6 shooting, 1 assist, 3 turnovers) all had a Very Bad Night.

The Spurs have zeroed in on James as the primary offensive threat. The 2013 MVP is averaging 17.5 points on 42% shooting in the first two games, and much of it can be credited to both the Spurs' team defense as well as Leonard showing poise in his first Finals run. However, that has been the only common thread between Games 1 and 2. In Game 1 Duncan was stellar after a 0-5 start, Parker took over in the 4th, and Miami was happy to accept what the Spurs defense was allowing (3's from Bosh, jumpers from Wade). At the same time, San Antonio took away the paint and the 3 point line, for the most part. In Game 2, however, the Heat shot 52.6% from beyond the arc, negating Green's great night, and although Gary Neal had a decent night to somewhat compensate for Ginobili's struggles, his lack of defense made most of his points worthless. 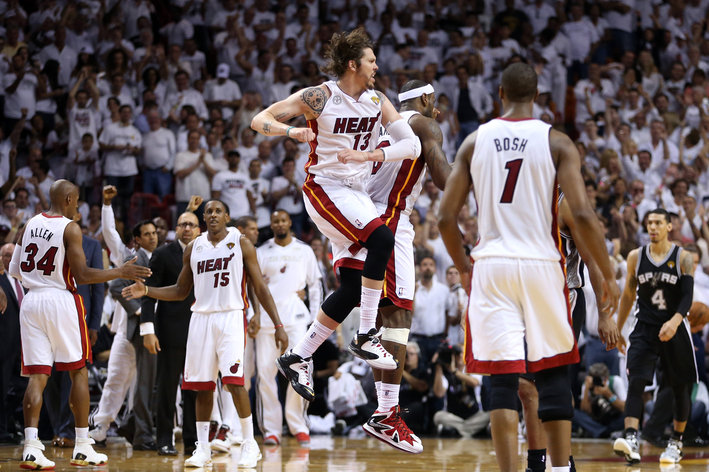 The Spurs have some things to change if they don't want to lose two games in a row.

Which means the keys for Game 3 are: Get the Big 3 going, close out on the shooters, prevent turnovers, and don't be a slave to the moment. The Big 3 were 10-33 combined (insert joke about how this is a good night for Allen Iverson here) and they couldn't adjust to the officiating crew being a bit more Crawford-esque. Methinks getting a post-up for Duncan while continuing the triple screen set for Parker will help them improve, while Ginobili should... yeah, like Pop, I've given up on hoping that he makes the right play as opposed to the high-risk, high-reward play. It's practically in his nature to play all out at this point, although it's more apparent as he has gotten older and the team's pace has put a spotlight on his issues.

A stat that bears repeating: the Heat shot 52.6% from beyond the arc. Ray Allen and Mike Miller were 6-8 combined. Instead of over-helping on James and Wade, the Spurs should simply not leave them free for even a moment, especially in the corner. The Spurs did this in Game 1, and it worked. Of course, a potential drawback is fouling them in the act of shooting, but this is minute compared to risking wide open treys for the greatest deep ball shooter in NBA history (you're not quite there yet, Steph Curry).

Remember Game 3 against the Grizzlies? Pop's answer to an interview was "Turnovers". That was the theme of the game, where in Game 1 the Spurs won the turnover battle 4-8, on Sunday night the Heat took the advantage 16-6. Not only did Miami reduce their turnovers, they also QUADRUPLED San Antonio's. I remember a stretch this season (before the All-Star break, mind you, so injuries were not the worst concern) where the Spurs averaged ~15 turnovers. Not surprisingly, they lost to Memphis, nearly coughed up a lead against the Lakers, and lost to New Orleans (!) in that span. As amazing the Spurs offense is when it is dialed in, the fact that it is based heavily on timing passes which means that strong and athletic teams that can anticipate the offensive flow and flummox the offense by forcing turnovers.

Nevertheless, let's not look at the final score and over-analyze. The series is tied, and it's now a best-of-five series. The next three games will be in San Antonio, where the home crowd will be overjoyed at the return of Finals basketball. And if you ask me, being a slave to the moment is how the Whirlwide Liter and other sports coverage make their bread and butter. After game 1 they were wondering if the Heat were done; whether they had surrendered the series. After Game 2 they'll be back to salivating over the defending champions to go back-to-back, and if you ask me, going in as an underdog has helped the Spurs rather than making them over-confident.

Nothing is certain, but I think this team has shown they're better at pulling it out than previous squads. In the past two postseasons, the tenor of the Spurs' elimination series changed when they got blown out on the road (losing to Memphis by 22 to give up a 2-1 series lead, losing to Oklahoma City by 20 to start the infamous backdoor sweep) but this season, they've bounced back well enough (come back from 16 points down in Game 1, lost HCA to Golden State, regained it in Game 3, lost Game 4 by 10 after leading for most of the game, rout the Warriors in Game 5, come back from 18 against Memphis) that I think that they're going out and play Game 3 much better.

Game Prediction: Spurs by 5. I blame Ian Dougherty for being too realistic in his preview and Kondor for being too optimistic in the preview thread (I kid, I kid).