Pop trolls the world, sends Big Three to San Antonio after Game 1 to rest up

Share All sharing options for: Pop trolls the world, sends Big Three to San Antonio after Game 1 to rest up

And that, my friends, is why I've insisted that the Heat are the biggest challenge the Spurs have ever faced and why beating them would be akin to upsetting Jordan's Bulls during their six-championship run from 1991-1998. Trying to pull this off with Tim Duncan and, particularly, Manu Ginobili, as compromised as they are by age, makes it, to borrow one of Ginobili's pet sayings translated from Spanish, "more complicated."

Winning Game 1 wasn't a fluke, okay? But the way they won it, with such careful, patient, deliberate offense and the near-perfect care for the ball they showed, like each possession was a newborn baby (albeit one that often had to be flung in the general direction of the rim with a second left on the shot-clock over and around the lengthy arms of a contesting defender) was not particularly sustainable. 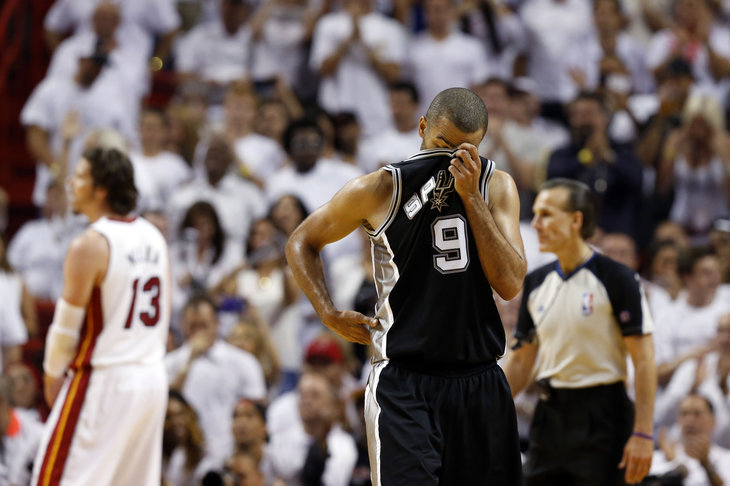 The Spurs fell to Miami in spectacular fashion in Game 2. Hopefully, they will hang on to the ball in future games.

Here's what you have to understand about the Heat: They're like the Borg. Whatever weapons you throw at them will work two or three times, but then they'll adapt, they'll assimilate, they'll modulate to the proper frequency and far quicker than you can imagine, your weapons will bounce off them harmlessly, as they make their deliberate march toward ending you.

The Spurs thought they were being smart and patient against Miami, playing careful passes off blitzed pick-and-rolls to the wing or to the big-man at top of the key, but really, turnover aside, they were just doing exactly what the Heat wanted them to do, taking the ball away from the hands of the best passers and ball-handlers and giving it to guys who are more plodding, who don't see the passing angles as quickly, who don't dribble it as well. Neither Green nor Leonard are experienced enough to make the quick decisions required to break Miami's defense. They're hesitating, allowing the rotations to catch up to them, before they're left with no choice but to kick it back out to a guard with hardly any time left on the shot clock and the offense no closer to finding a good look or even putting a Heat defender in a compromised position.

They're just getting very few quality looks --practically none in the second half last night-- and that pattern will continue going forward, with Miami choking the life from their offense over and over, unless they change things up and realize that the way to beat them is to not necessarily use our strengths but rather attacking their weaknesses. Yes, the Spurs happen to be a great pick-and-roll offense. Perhaps the best in the league. The problem is that they've run into an opponent with the best pick-and-roll defense in the league, and guys like LeBron James, Chris Bosh, Udonis Haslem, Chris Andersen and Mario Chalmers specialize in destroying the Spurs bread-and-butter.

What the Spurs have to do is take a page out of the Pacers' playbook (and it may literally only have one page in it, but I digress). Duncan isn't quite as big as Roy Hibbert, but he's got to post down low and go to work. There's a clear advantage there and I was stunned we didn't use it early and often. Maybe Pop sensed that it was going to be a 5-on-8 kind of evening (and boy was it ever) and that his guy was going to get abused without any rewards in a Game 2, on the road, up 1-0 in the series and decided he'd shelve "four-down" until the home games, because otherwise I'm mystified why we didn't see it. Either way, Duncan has to have more of an active role in the offense, at least every second or third possession, with the ball in his hands either in the high or low post, initiating things, letting Parker and Ginobili work off the ball and away from the defense's focus.

Speaking of Tony and Manu, what they have to do is similar to what Lance Stephenson and Paul George did when the Pacers were humming along: Play faster. Don't rely on the same predictable pick-and-roll a hundred times in a row. Just go. Beat the first man without relying on a screen. Surprise a defender by charging hard before the screener even gets there so that the moving perimeter defender gets crushed on the move by that big. We did this a ton with Mike Conley, just destroying him with brutal picks time and again, to the point where he had absolutely nothing left physically or mentally by Game 4. He was done.

Obviously if Ginobili continues to dribble the ball like it's covered in poop we're gonna be in trouble.

Obviously if Ginobili continues to dribble the ball like it's covered in poop we're gonna be in trouble, but hopefully he'll regain some familiarity and traction with it at home and maybe a more sympathetic refereeing crew will notice how he's getting his forearms and elbows nudged and hacked on nearly every dribble. Still, like Parker, he has to get the ball and GO. Waiting around against Miami and giving it up is just slow death. They need to attack the defense early in the shot-clock, penetrate and see what's open and available and mix in pick-and-rolls only here and there. They need to give it to Duncan and work off of him, running curls around the elbows, occasionally faking the curl before back-cutting quickly for backdoor layups. Really, what they need to do is play fast, keep switching it up constantly and don't ever let the Heat get comfortable with anything, defensively. Miami switches a lot of things on defense, so if the Spurs find themselves with Ray Allen or Mike Miller guarding the guy with the ball, USE that, even if it's Leonard or Green who have it. Clear out, call an Iso and have those guys go to work. Attack them where they're weak. Whatever you do, just do it faster. Once Miami gets set in the halfcourt they're a lot harder to score on, no different than the Spurs defense. Hopefully the energy of the home crowd will make the Spurs play at a faster pace and gather some momentum and be able to string together the occasional 10-2, 14-3 kind of run they're not-at-all-famous for.

On the other side of the ball, I thought Miami played a pretty smart game. For the most part, James and Dwyane Wade are refusing to fall for the bait we're laying out there and aren't taking that open 20-footer, Wade in particular. He is so freaked out by his jump-shooting slump that at least three different times he drove and took a ridiculously difficult, contested floater in traffic rather than shoot an open J. He felt more comfortable taking the more difficult shot only because it was in the paint and it wouldn't have been another embarrassing brick. James did toss up a few, almost by necessity, but he was still hurting the Spurs plenty through three quarters just by virtue of his defense and the way his drives were causing the Spurs to shift and move and opening up lanes and shots for Chalmers and Bosh, among others.

Where the Heat really kill you though is with open threes, and it's simply inexcusable to ever leave Allen or Miller open, ever. It's the main reason I'm terrified of having Gary Neal on the court, actually. He just continues to lose those guys. The Spurs talk about late rotations and missed rotations and all that, but the point is against Allen or Miller there shouldn't be any rotations in the first place. Just don't leave them and settle for whatever Miami's big three do in the paint.

I think the best answer for beating the Heat is to turn them into the three (more like 2.3) man team they're stereotyped to be and most definitively were back in 2011. Those three guys have to take 80 percent of the shots for the Spurs to be successful. Their role players, much like San Antonio's, are too good and too disciplined to take bad shots. They only shoot when they're open and from areas of the floor where they're comfortable. You simply can't allow their shooters open looks from three or for Andersen to be wide open underneath the rim. Take your medicine against LeBron's drives and the touches from Wade and Bosh and make the other guys grow bored and listless.

Besides, if you've noticed, Wade only has a half in him before his knee gives out and he becomes mostly a spectator in the second half. Bosh is basically just a jump-shooter anyway. Make LeBron do everything. Let him score 80 if he can. Just don't leave anyone else. And if their big three have to expend more energy on offense, then maybe they'll be more tired on defense.

Also, the Heat had a lot of success in the second half using a James-Chalmers pick-and-roll, which gave LeBron momentum going to the hoop with no Duncan in the paint. Gotta switch that up next time so it's another defender blitzing, whether it's Splitter, Diaw or some other small. Gotta keep Duncan as close to the basket as possible, at all costs. We can't rebound without him.

Finally, and this is just a minor quibble, it'd be nice to get a fair whistle again, just to make the games more interesting. Letting Manu and Tony get hammered repeatedly without a call so they look like putzes is getting pretty old. Ignoring every Miami kicked ball (I counted four) just because hey, I bet that Heat fast-break sure will make for a neat highlight package doesn't seem to sporting to me and calling three fouls on Ginobili in a 3:17 span in the second quarter (the third of which was so weak) wasn't very nice. Joey Crawford did call a couple of questionable moving screens on James, but there's no way he gets whistled for his third on some harmless reach-in with 4:35 left in the quarter.

That game was like The Red Wedding, but with assorted kicks to the nether-regions before all the stabby-stabby, just for the hell of it. I would prefer not to go through that again. A three-game winning streak at home sure would be dandy.