Despite his size, Boris Diaw proved that he can handle point guards on Monday night. Against arguably the best shooter in the league, Diaw performed admirably in isolation and pick and roll situations involving Stephen Curry, stifling the fourth year guard in the final minutes of regulation.

Basketball games often resemble chess matches. This comparison has been made widely by media, coaches, and fans alike, and the universality of the metaphor makes it a common parallel when trying to explain how coaches and players make adjustments during a game or series.

If basketball is like chess, then Gregg Poppvich may be likened to Garry Kasparov, considered by many to be the greatest chess grandmaster. Pop has always been lauded for his ability to outthink opposing coaches and get the upper hand via brilliant game-time and intra-series adjustments.

Monday night’s game was some combination of that brilliance and a colossal heap of luck, to which Pop himself would say he is no stranger. At this point, we all know the story: The Spurs rallied from 16 back with 3:57 to play, ending regulation on an 18-2 run, proceeding to claim the victory in double OT on a redemptive Manu rainbow.

Prior to that 3:57 mark, the Spurs had made 3 field goals on 17 attempts. They finished 6 for 6 to shoot 39% for the quarter. The Warriors shot 1 for 8 in that final four minutes, bringing their percentage in the quarter down to 24%. San Antonio was able to make that run for a number of reasons, including, but not limited to, Stephen Curry’s fatigue, Tony Parker’s aggressiveness, Popovich’s adjustments, and luck. For now, let's focus on the third reason.

At the 7:54 mark in the fourth, Pop switched Kawhi Leonard to guard Stephen Curry, this time for good. It’s no secret that length bothers most point guards, especially those of smaller stature like Curry. To see the other side of the spoon, and if you can handle it, just revisit Games 3-6 of the WCF last year, where Thabo Sefolosha severely hindered Tony Parker’s ability to initiate the Spurs’ offense. Popovich knew that Leonard’s length would deter Curry from dominating the game as he had done through isolation scoring from deep, and Kawhi's pesky wingspan was certainly part of the equation in that fourth quarter run.

The problem with that matchup is that Curry is quicker than Leonard, and he demonstrated that several times during the game, sliding by Leonard and into the paint for layups, floaters, or assists. Consider this play during the third quarter. Kawhi is guarding Curry, but the point guard slips into the lane with a pick from Andrew Bogut. 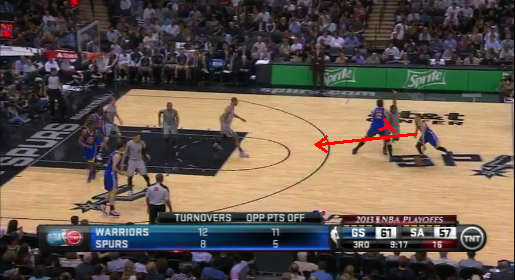 Duncan chooses not to shadow Bogut on the screen and waits too long to come out to meet Curry, staying back initially to protect the paint despite the fact that his man, Andrew Bogut, is near the top of the key. 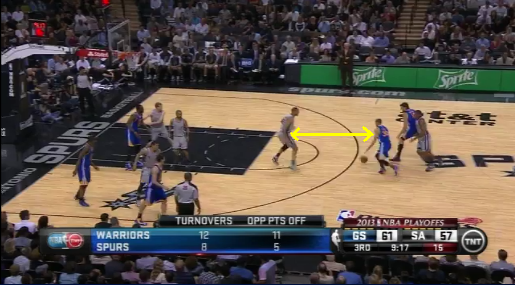 Curry dives to the right, slipping by the ailing Duncan, and forces Matt Bonner to step out to contest a floater or further penetration into the paint. 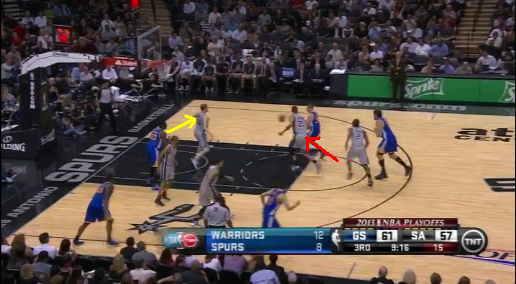 Bonner is forced to leave Draymond Green, who is wide open for a cutting dunk. 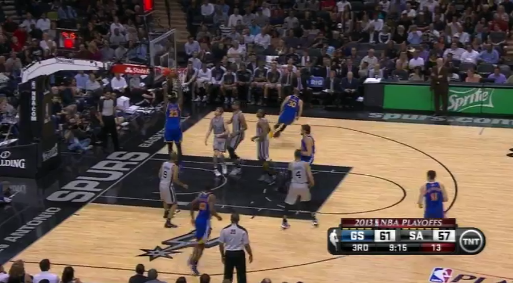 This play is representative of many in Game 1, where Duncan chose not to step out and contest jumpers or deter penetration. This has never been a huge part of Duncan’s game; he rarely shadows bigs on screens and prefers instead to patrol the paint and block shots at the rim, egging opponents into less efficient jump shots. Usually, Tiago Splitter complements Timmy’s paint protection by serving as the pop/jump shot defender. His absence and Tim’s sickness, however, rendered the Spurs incapable of protecting the paint and the P&R jumper, allowing Curry and the Warriors to finish at a very high clip on the P&R.

During those epic four minutes, and throughout both overtimes, Popovich tasked Diaw with meeting Curry near the top of the key any time he received a screen or slipped past his man on isolation. Consider the isolation play which the Warriors ran at the very end of regulation.

Kawhi is out guarding Curry, and the Warriors have made it clear that this is a pure isolation situation, clearing their other four players to the perimeter so that Stephen can go to work. 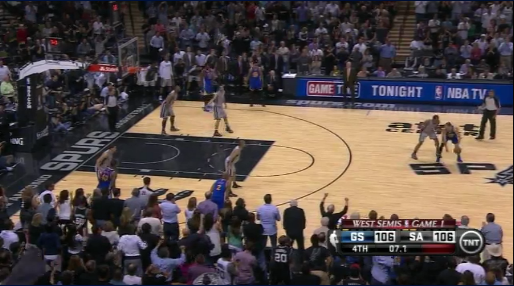 As soon as Curry makes his move, Diaw flies out to meet him. 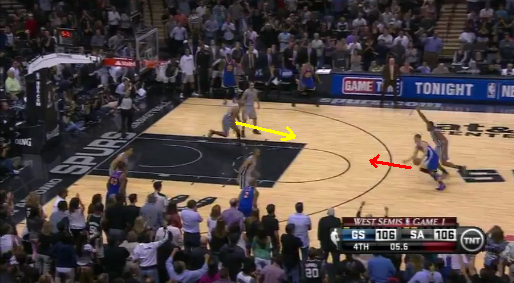 He and Curry meet at the free throw line, and Stephen pulls up as though he is going to shoot, but remembers his earlier shot which Diaw swatted, and the Spurs converted into fast break points. 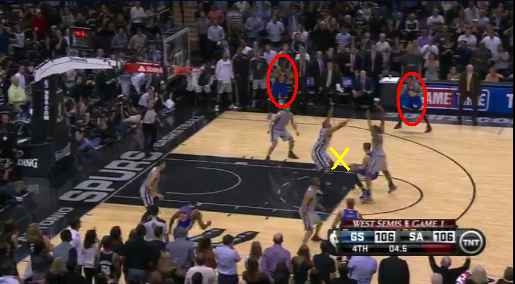 At this point, Curry’s best bet would have been to hit Kent Bazemore, who was in position to shoot or swing it to Draymond Green in the right corner. Manu Ginobili would have had to cover both men, and likely would have conceded Green an open look. Instead, Curry’s indecision cost the Warriors the chance to finish the game, and his desperation shot (which was closer than Screaming Spurs Lady wanted it to be), clanked off the back left iron.

For all the negativity he receives regarding his rotundity, Boris has some seriously quick feet. Watch the video in real time, and look how quickly he races out to confront Curry. It may be the fastest he has ever moved in a Spurs uniform (fast forward to 2:07):

Boris performs surprisingly well defending guards in isolation situations, thanks to his size, length, and footwork. Because he was able to meet Curry at the perimeter and, for the most part, keep Curry out of the paint, the Warriors were forced to largely abandon the P&R in favor of isolation plays. They were trying to set screens for ball handler dives or big man rolls but were ending up with 1-5 switches, pitting Diaw against Curry in isolation. What we know now is that, if you’ve got to switch a big onto the best shooter in the league, Boris Diaw isn’t a bad choice.

I do think it’s unreasonable to assume that Boris Diaw can maintain a high level of isolation defense throughout a game, in part due to his girth, but also because before Monday night he hadn’t played since early April. His conditioning is most certainly in question. In a 58 minute game, Diaw only played 26 minutes. Fortunately for the Spurs, they have this other foreign big who just so happens to be pretty good at defense. While Tiago Splitter may not be able to step out and handle switches like Diaw, he provides another big defensive body in the paint to prevent cutting baskets and easy layups. If a healthy Tiago had played Monday night, I doubt that the Spurs would have even found themselves in a comeback situation. Apart from Curry’s third quarter explosion, the Spurs played it close with the Warriors despite surrendering an early lead, mostly due to cuts and points in the paint. With the Splitter and Duncan pairing, that lead likely never materializes for the Warriors. Who knows how Curry would have responded in the third if his team were down five?

For the sake of posterity and playoff memories, however, I’m thankful Tiago was out. It was another tiny yet necessary piece of the puzzle that led to one of the greatest Spurs games I have ever watched. As of now, Splitter’s status is still questionable for Game 2. It would be nice to have him on the floor, especially if Duncan is still recovering from illness, but until he is ready to return, the Spurs should be able to lean on Diaw and Leonard to corral Curry and keep him from dominating in isolation and P&R situations.

Either way, can we just skip the third quarter tonight?

Full Coverage Spurs vs Warriors, Game 1 of Round 2