After a bad shooting night, and nearly being the goat of the game with an ill-advised three-pointer late in the second overtime, Manu Ginobili came up with the biggest shot of Game 1 for the Spurs.

On a night where the San Antonio Spurs showed a lot of inconsistency, no player had more peaks and valleys than Manu Ginobili. He started off fairly well, scoring 6 points on two shots and tallying 2 assists in the first quarter, and looked to be in "full Manu" mode again after his minutes restriction was taken off after the first round. But once the first quarter buzzer sounded, it was mostly bad for Ginobili as he totaled 16 points on a horrid 5-20 from the field.

One play in particular seemed destined to define Ginobili's night. With just under a minute to go and the Spurs up 3, Ginobili got the ball at the top of the arc and, for reasons only he knows, jacked up a three-pointer from 3 feet behind the arc with 11 seconds left on the shot clock. It missed badly. That led to a Golden State basket in transition, and ultimately gave the Warriors a chance to take the lead, which they did with just 3.9 seconds left, 127-126 .

With that little time left, there's almost nothing a team can do except call a timeout, advance the ball to the frontcourt, and have the head coach draw up a play to take the lead. So, that's what the Spurs did, and luckily, Coach Gregg Popovich is one of the best in the league (if not the best) at drawing up quick-hitting plays in crunch-time. And after a quick play to get Tony Parker the ball was stopped by a Warriors foul, this is what Coach Pop gave the world. 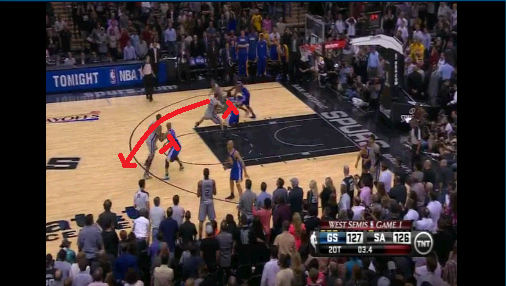 It starts out as a staggered screen for Tony Parker, with Manu Ginobili and Boris Diaw as the screeners. Danny Green is relatively un-involved on the play, but is in the corner to space the floor. Kawhi Leonard is the inbounds passer. 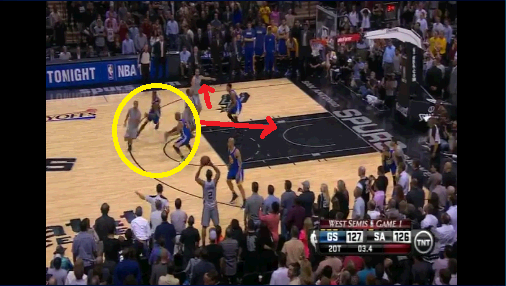 As soon as Parker gets around both screens, both Ginobili and Diaw begin their actions. Ginobili goes to the left wing, intending to just space the floor, and Diaw cuts towards the basket to try and seal his defender for a quick score. Notice that both Jarrett Jack and Harrison Barnes are highlighted by the yellow circle. Golden State is switching screens on defense, and somewhere along the line, there was a miscommunication leading to both Jack and Barnes covering Parker. That simple issue is what allowed this play to happen. 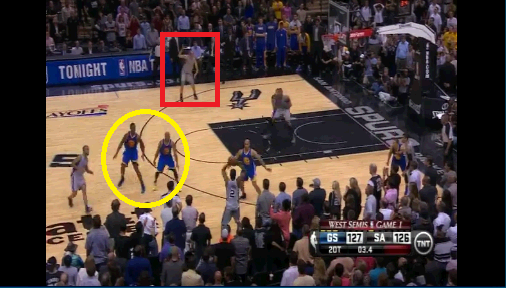 By this time, Jack and Barnes' mistake has left a dilemma for Warriors guard Kent Bazemore. He has to choose whether to go cover Diaw, who is right near the paint, or go defend his man, Ginobili, on the three point line. He makes the correct choice, going to cover Diaw, who is no more than 4 feet from the rim and in great position. That leaves Ginobili wide open on the left wing, and the only defender free to cover him is busy thinking it's his responsibility to cover Parker. 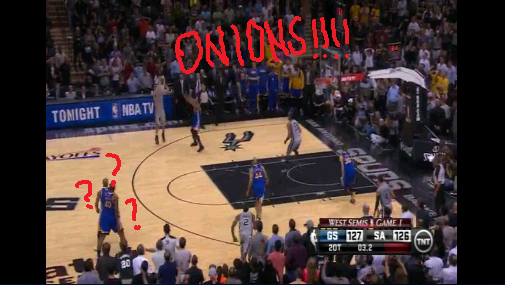 Kawhi, after pump-faking the pass to Diaw, spots the wide-open Ginobili and fires the ball his way. Bazemore does a superb job of trying to recover to challenge the shot, and he does make Manu change his shot (he admitted as much in the post-game interview) but it's too little too late. By the time the pressure arrives, Manu has already risen up and knocked down a three pointer that would put the Spurs up 129-127, and help further Ginobii's reputation for having some big onions. Meanwhile, Harrison Barnes and Jarrett Jack are left to wonder what exactly went wrong. Something tells me that Mark Jackson informed them shortly afterwards.

Now, let's check out the video.

By watching in real time, it's easier to see just how quickly the defensive breakdown by the Warriors happens, and appreciate how the Spurs were able to capitalize on it immediately. It's a bang-bang play, and deciphering your defensive responsibilities on the fly is difficult, but it's something that needs to be done to win games. This play is a prime example of a young team figuring out how to not make mistakes under pressure. This game was a learning experience for the Warriors, and you can expect that their coach, Mark Jackson, makes sure these types of errors don't happen again.

As for the Spurs, it capped an incredible comeback, and provided redemption for Manu Ginobili. Coach Pop would go on to praise Ginobili for the game-winner, while still providing a little dose of criticism for his wild shot selection beforehand, saying: "I went from wanting to trade him on the spot, to wanting to cook him breakfast tomorrow morning." Yet again, San Antonio showed their mettle, and made more plays at the end of the game than the opposition, something we've learned to expect under Popovich. And, against a young Warrior team, that may be the deciding factor for the rest of the series.

And since it's so pretty, let's see it once again, from a different angle; in slow-mo.

Full Coverage Spurs vs Warriors, Game 1 of Round 2