Splitter's defense was key in the Spurs sweep of the Grizzlies

How did the Spurs sweep the Griz? With defense. And while Tim Duncan is still the anchor of that unit, it's the play of Tiago Splitter that made the Spurs defense of Memphis' post threats as stingy as it was.

Share All sharing options for: Splitter's defense was key in the Spurs sweep of the Grizzlies

In 2011, after the Memphis Grizzlies destroyed the San Antonio Spurs in a six game, first round upset, everyone was left stunned, wondering what had just happened. The Grizzlies post duo of Zach Randolph and Marc Gasol proved to be too much as they bullied their way in the paint, scoring at will on offense without giving an inch defensively. Yes, the Spurs had Tim Duncan, but he was already in steady decline, and had no post help around him. Antonio McDyess was too old, DeJuan Blair too small, and Tiago Splitter too soft and inexperienced at the NBA level. Matt Bonner was Winter Shoes: the worst possible article of clothing you could be stuck with year round.

Fast forward a few years, and the Spurs' post position has undergone a metamorphosis. Duncan is where he's always been, but he's been resurgent as one of the best big men in the game, tallying his best per-36-minutes numbers since 2007. Antonio McDyess retired, and in his spot is Boris Diaw. Matt Bonner has slowly added to his game, and it looks like he has finally found a way to be effective in the playoffs. And last, but definitely not least, there's Tiago Splitter. (Be sure to read J. Gomez's excellent piece on Tiago Splitter.)

While he's still extremely awkward, he has transformed into an aggressive, mobile defender about as quickly as a Caterpie evolves into a Butterfree (h/t to @FreeBigMacs for the photoshop). He has learned how to mesh with a rejuvenated Tim Duncan on defense, and together they have created one of the NBA's better defensive pairs in the post. 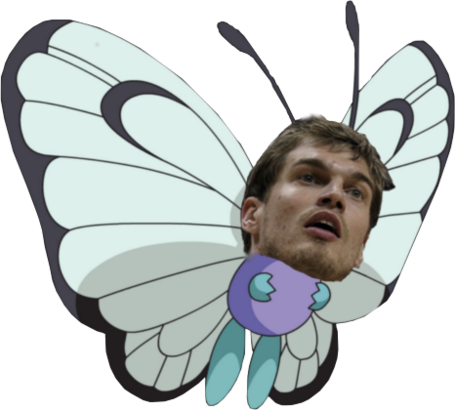 First, we'll look at at Splitter's defense against the pick and roll against Memphis. This presented a tough challenge for Sparkles seeing as how Marc Gasol is one of the best roll-men in the NBA, getting 1.19 PPP, according to Synergy. Gasol normally runs it with point guard Mike Conley, who is very crafty in the pick and roll game, as Zach Lowe explains here in greater detail. However, as we can see in this video, Splitter was not only able to take the challenge in stride, he thrived.

In the first clip, there's a perfect example of Splitter using his quickness to navigate between guarding the ball handler and the screener. Even though the ball handler in this instance is Keyon Dooling as opposed to Mike Conlley, Splitter still has to prevent him from getting to the rim. He lays back against the pick, waiting for Dooling to come at him off of the screen.

(Sidenote: This was the problem against the Warriors. The Spurs' defensive scheme against pick-and-rolls calls for the rim protector to lay back in most cases, because it's based around Tim Duncan and that's where he's most comfortable. The Warriors are completely fine with this, as their point guard has a god-given ability to shoot, and nuked the silver and black any time they waited for the action to come to them.)

Then, Splitter corrals Dooling, forcing a pass back to the screener, Gasol. That pass forces Splitter to recover back quickly, because Gasol is an extremely good shooter around the free throw line. Getting back to Gasol quickly also forces him to try and make a quick play, because he can pick apart any team's defense when facilitating from that area of the floor. Gasol elects to try and attack Splitter's close-out, but Splitter closes out well, going at Gasol under control, then breaking down and sliding quickly to stay in front of Gasol, who eventually misses the runner. What Splitter is able to do on this play illustrates his underrated mobility, and also shows his great technique when closing out an offensive player. High school ballers, take notes.

Now, while his pick-and-roll defense was pretty great as usual, Splitter still had a lot of work to do. He was also a part of a team defensive effort to keep Zach Randolph from scoring down low in the post. Since Randolph is used to bullying people down low, Coach Popovich put in a plan for him to be fronted down low at all times. The tactic paid off, as the team of Splitter, Duncan, Diaw, and Bonner refused to let Randolph get comfortable all series long. (Bonner was especially terrific on defense, fronting well and scrambling to the corner to defend the three pointer about as well as anyone can.) But, as we can see here, while Splitter was on him for a bulk of the time, he was able to stop him, or direct him into a double team when isolated in the post versus Z-Bo.

The first thing we can see about this set of videos is that Tiago Splitter is very physical with Randolph, and can take a beating. That toughness is something that has developed quite a bit this season. He'd always shown to be a fairly smart defender, regularly beating guys to spots, but he had a tendency to be pushed around a little bit which can be a fatal flaw when playing someone like Zach Randolph. This year though, Splitter has been more aggressive, not letting rough offensive play play bother him. In fact, on the third play in this video, he's very physical with Randolph and did his work early on defense fronting him. This, coupled with building frustration due to not scoring well in Game 1, led Randolph to commit a foul by way of shoving a forearm into Splitter's back.

Another thing we can see from Splitter in nearly all of these pays is his ability to go vertical against the vertically-challenged Randolph. Time and again, Randolph throws a multitude of power moves in the post, hoping to knock Splitter off balance for an easy score. To his credit, Splitter was able to stay balanced, and force Randolph to go over him, instead of going through him. It's not that Splitter was jumping out of the gym and blocking shots or anything, though. He stayed grounded, put his arms straight up into the air to avoid a foul call, and used his length to try and alter Randolph's shots. This proved to be effective, as Zach Randolph may not be able to jump over a phone book in the first place, let alone getting enough lift to consistently shoot over lanky player like Splitter.

Over the course of the playoffs, Splitter has shown that he's ready for most everything in the course of a game; and one play in particular was impressive to me. At the end of regulation in crucial Game 3, the Grizzlies had one final possession to win the game. They drew up a play that went right at Splitter.

Conley gave the ball to Gasol at the elbow, then went to the opposite side of the floor. He ran off of a nifty little looping action around two screens, then took a hand-off (that essentially acted as another screen) and had a pretty nice line to the bucket for a score. The only Spur between him and the basket was Splitter.

He recovered quickly from the Gasol hand-off/screen and slid over quickly to get in between Conley and the basket. He was able to stay with the speedy Conley and use his length to force him to take a tough shot, which missed. The Spurs went on to win in overtime, and that was that. It was a really great play designed by Grizzlies coach Lionel Hollins, but Splitter's defensive discipline, focus and quickness denied Conley and forced overtime.

While guys like Tony Parker and Tim Duncan get a lot of praise (as they deserve) for being the reasons the Spurs succeeded in the Western Conference Finals, the work done by the role players must not be ignored. Danny Green shot the ball well. Kawhi Leonard made plays on defense leading to transition buckets, and helped out on the defensive boards. And there was Splitter, willing his way to an outstanding defensive series that could greatly affect his future. He is a free agent this year and other teams in need of a defensive center have to be taking notice. (I'm looking at you, Portland.) He's had a great playoffs so far, and make no mistake, he will need to continue that for the Spurs to beat either the Heat or the Pacers in the Finals.

(All stats used in this piece are from Synergy.com or the NBA.com stats database)