The Big Three certainly are a huge part of the Spurs success. But what is it about them, exactly, that indicates the Spurs are performing well? Is it points scored? Assists? Rebounds? How about the rest of the team? Who provides the most statistically significant contributions to the Spurs margin of victory? Oh, where to begin...

Share All sharing options for: The Spurs are a .500 team when Tony Parker shoots less than .500

In my earlier posts tracking the Big Three throughout the playoffs, I made a significant hypothesis about the Spurs playoffs hopes, about how their success depends upon the productivity of a certain French point guard. My conjecture was not particularly novel, and the argument hasn’t changed, really since the beginning of the season, and even for a few seasons now: Tony Parker is the driving force of the San Antonio Spurs system offense. Most knowledgeable Spurs fans have concluded that a fully healthy Parker who at least somewhat resembles his mid-season form (26.1 ppg, 8.3 apg, 54% shooting in February) will be a crucial piece of the Spurs drive to sew that "Finals" patch onto their jerseys, and hopefully lift the Larry O’Brien trophy four to seven games later.

Now back to my theory, taken from my most recent Big Three tracking post:

Of all the statistics I am tracking for the Big Three, I feel that Tony’s shooting is most fundamentally tied to our playoff success.

That’s right, FG%. I’m not necessarily concerned about how many points Tony scores, how many assists he dishes, or how few times he turns the ball over. I believe that when Tony shoots a high percentage, it is a strong indicator that he is at the top of his game. It means that he is choosing smart shots, finishing at the rim, and burying that mid range jumper off of side screens. These are all hallmarks of Tony’s game, the things that have made him a deadly offensive point guard for more than half a decade now.

Up until this point, I have generally just assumed that Tony’s FG% directly correlates with his success, and the success of the Spurs as a whole. These are logically developed thoughts, consistent with the mentality of the intelligent herd, and generally, when this many people have a gut feeling about something, it tends to be correct.

Nonetheless, as most of you know by this point, I like numbers. Whether they are meaningful or meaningless, I am a Number Muncher. To me, basketball statistics are like warm chocolate brownies: messy, and RICH. So I couldn’t help but dive into this bowl of statistical batter in hopes of answering a few questions about the Spurs.

Tony’s contribution to Margin of Victory

*p<0.05 is chosen arbitrarily, though it is a generally accepted scientific standard for establishing significance. 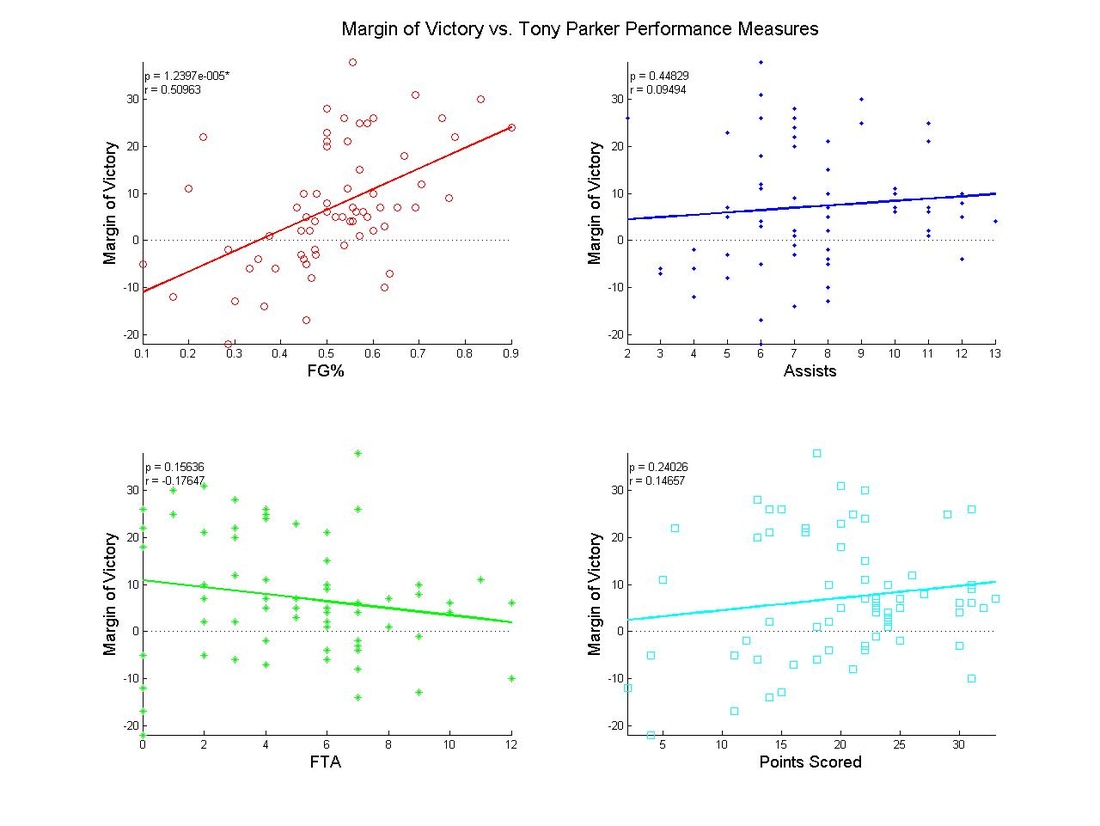 Low and behold, we were right! Tony’s FG% is highly correlated with the Spurs margin of victory (r = 0.51), and the correlation is very significant (p = 0.00001). None of the other statistics is even close to confirming the hypothesis of significance. In fact, I might as well quit tracking Tony’s attempts from the stripe, because even though the correlation is low and insignificant, there is some suggestion that more free throw attempts from Tony correlates to a lower MOV.

Now, to be clear, these stats and graphs only imply correlation. They do not imply causation. We can say, "When Tony shoots a high percentage, the Spurs usually win," but not "If Tony shoots a high percentage, the Spurs will win." Confounding factors must always be considered, and often times the results from these studies won’t appear to make sense (more on that, later). That being said, the Spurs were 37-3 this year when Tony shot 50% or better. They are 21-21 when he either didn't shoot 50%, or he didn't play. That’s absurd.

Tony versus Tim and Manu

We have established that Tony Parker’s shooting percentage strongly indicated success for the Spurs during this regular season. But might the same be said for the other members of El Tres Grande?

Even though Duncan is generally no longer the go-to option for the Spurs on offense, he took over a familiar role, like that early in his career, ruling the low block while Tony was injured. His dominance in the paint largely kept the Spurs afloat during the month of March. He may not be the guy now, but Timmy can still deliver.

And what about Manu? Despite his oft-injured status, he remains the lifeblood of the second unit. But is his scoring as valuable as his distributing? This year, we’ve come to think of Manu more as an assists guy than in his early years, when he once slithered and contorted through the paint on his way to some of the most beautiful, ridiculous finishes in NBA history. How does that stack up?

As it turns out, Manu’s scoring is just as significant as Tony’s. Timmy? Not so much. Check out the chart below, which illustrates each of the Big Three’s FG% (mean ± SD) in wins and in losses, and their significance (p-value) to MOV (click to enlarge). 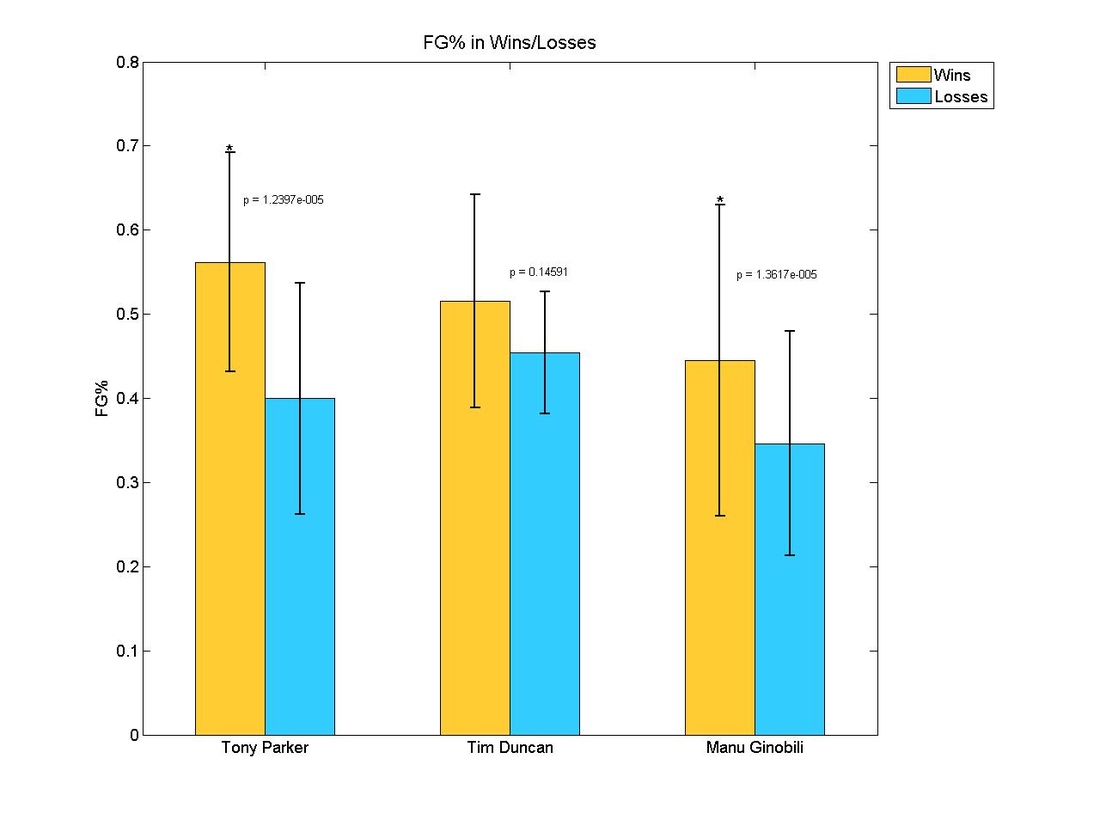 Each of them shows a dropoff in scoring average during losses, but Tim’s is not significant. Manu’s, on the other hand, is just as highly significant as Tony’s! Even though Manu shoots a lower overall percentage than Tony, and sees less off a dropoff in losses, the correlation of his FG% to MOV is very significant (p = 0.00001).

What we are seeing here is that the Spurs need a go-to finisher in both units. They don’t necessarily need a volume scorer, like a Carmelo Anthony or a James Harden. Rather they need somebody to judiciously take, and make, good shots, and to pass up on bad ones. When Tony and Manu do that, the Spurs have a high likelihood of winning.

What is most significant to the Spurs success?

All of this talk about the Big Three makes me wonder about the rest of the team. Why leave them out? Surely Danny’s three point shooting, Tiago’s rebounding, and Kawhi’s steals at least somewhat contribute to the success of San Antonio’s team. In order to bring more guys into the fold, I ran this analysis for every player in the playoff rotation, and for each of their traditionally attained basic statistics, based on the 2013-2013 regular season. What resulted is the richest, "ooey-gooey-est" statistical brownie. A complete mess, but chock-full of goodness. Check it out (click to enlarge): 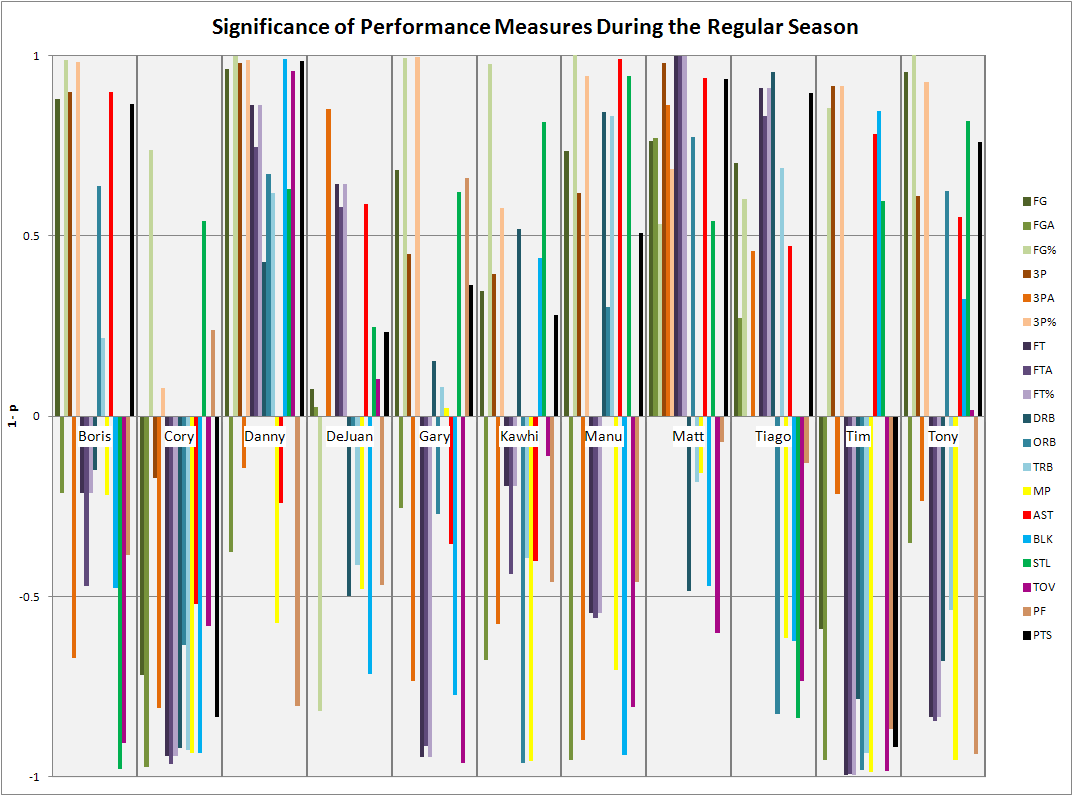 Holy schnikes that is a lot of information to take in. Here is how to interpret it: For each player, labeled on the horizontal axis, I calculated the p-value significance of each of their stats (colors indicated in the legend) to the Spurs MOV. The vertical axis plots 1 minus the p-value, so in this case, those bars which approach 1 are most significant to the Spurs success. Conversely, a negative result indicates that that statistic is negatively correlated to MOV. Take some time to absorb some of the data, and notice anything that stands out.

To distill some of this info further, here are those statistics which are significantly correlated to MOV (p<0.05), both positively and negatively:

Because there are SO many things to observe, chew on, discuss, and argue here, I am only going to touch on a few key things. The rest is up to you guys and your comments.

First, the positive correlations. Tony and Manu’s FG% are most strongly correlated to the Spurs MOV, and beyond that it isn’t even close. If these guys shoot well, just about everything else can go poorly and the Spurs will still have a shot at winning. Secondly, Danny Green is very important to the Spurs. When IcyHot is taking and hitting the Tarheel Triple, it is very tough to beat San Antonio. Strangely enough, and to the chagrin of Fred Silva, Matt Bonner is also pretty important to the Spurs, though in a very strange way. While the number of three pointers Bonner attempts is significant, Bonner’s free throw shooting shows a strikingly strong correlation to the Spurs MOV. Take that for what you will, because I am honestly not sure how to interpret it. Remember when I talked about confounding factors? That is a prime example.

Now on to the negatives, where things get extremely interesting. Notice anything funny? The top 5 significant negative correlations all belong to the GOATPUFF. How do we interpret this? I think this generally indicates that when Timmy plays a lot of minutes, the Spurs do not win in blowouts. This makes sense in the context of the season. When Tony and Manu have things under control, Timmy generally sees less than 30 minutes of court time. Those games in which Duncan received 35+ minutes, especially in the regular season, were often closely decided contests which unfortunately resulted in a loss. Again, confounding factors come in to play. Another strange result is the case of Cory Joseph. The second-year guard’s statistics actually have a higher negative correlation than Duncan’s, but were less significant due to a very limited sample size. CoJo obviously played well enough in the regular season to earn a playoff spot, so what gives? Well, generally when Cory played, it meant Tony wasn’t playing. It’s not that Cory was bad for the Spurs, but rather that Tony’s absence was bad for the Spurs. Duh.

Have at it, you guys

Also, since I feel like I’ve struck a statistical goldmine here, I am going to apply these same principles to a post about our next opponent, the Golden State Warriors. So keep an eye out for that one.