Fans, broadcasters, players, and Gregg Popovich have declared emphatically that a high pace of play will be key to the Spurs success in the Western Conference Finals. The question is, what do they all really mean by pace? The differences in the offenses of the Spurs and Grizzlies are vast, but there are certain things on which San Antonio should focus in order to keep winning.

Much is being made in this series about pace of play. The San Antonio Spurs are one of the "fastest" teams in the league in these terms, using 96.4 possessions per 48 minutes on average, ranking them the 6th quickest. The Memphis Grizzlies, on the other hand, are the slowest team in the league, and their yawn-inducing 88.4 possessions per 48 minutes remind me somewhat of the great Spurs teams of the mid-aughts.

During a third quarter interview with Doris Burke on Sunday evening, Gregg Popovich said that the key to the Spurs effectiveness on offense was contingent on maintaining pace. The Spurs can certainly be effective in the half court — as they have demonstrated for a decade and a half — but Popovich's recent shift towards transition points and quick finishes paints a stark contrast to the grit and grind half-court drubbing that the Grizz capably employ. When the Spurs are at their best, they are aggressively pushing the ball upcourt. The Grizzlies beat you by making you play their game, slowing you down in the half court and punishing you on the inside. The Spurs cannot submit to this style of play and hope to avoid a long, gruesome defeat.

When Popovich says that the Spurs are trying to have pace, basketball nerds like myself tend to associate his words with pace statistics commonly exhibited in box scores and efficiency rankings. "Pace" is a clever statistic targeted at estimating the number of possessions a team uses for 48 minutes. The actual formula for pace, per Basketball-Reference.com, is:

The formula itself is more complicated than it appears, and in non-overtime games it simply comes out to the estimated total possessions in the game. For more info, check out the Basketball-Reference glossary index on possessions.

The estimate is relatively robust, but the pace statistic inherently relies on how quickly both teams play. Over the course of a season, average pace for a team can give a decent idea of the speed at which they play, as I noted earlier for the Spurs and Grizzlies. However, for a single game, the "pace" can be misleading. Case in point: The pace for Sunday evening's Western Conference Finals Game 1? A meager 82.8 possessions. That's the slowest game the Spurs have been involved in so far in the playoffs by a significant margin, yet it was their second-largest margin of victory in the playoffs (remember when they beat the Lakers by 31?). If Popovich and the talking heads are right, and the Spurs have to keep the pace up to win games, then how in the world did they win Game 1 running away? Well the answer is one part semantics and umpteen parts statistical breakdown -- which makes me very happy.

In the next few paragraphs, I'm going to demonstrate what I think Popovich means by "pace," and how the Spurs did well to keep the game speeding along on the way to a dominant victory.

You'd think that if a team is playing fast, they are scoring early in the shot clock. The Spurs did that on occasion in Game 1, but, perhaps surprisingly, actually used more clock on average than the Grizzlies. In possessions that ended with a shot attempt with a full shot clock (i.e. didn't end in a turnover, no end of period shots possessions, no tip ins), the Spurs used 14.42 seconds per possession. The Grizzlies used 14.19 seconds per possession. That's a solid difference, but probably not significant in a one game sample. On scoring possessions, both teams used an average time of 13.60 seconds. On non-scoring possessions which ended in a shot attempt, the Spurs consumed 15.50 seconds per possession, while the Grizzlies used 14.72. So generally these teams were better off when they shot earlier in the shot clock, while the Spurs performed slightly worse when they took more time. This would be expected for any team, though, since some of highest percentage shots are transition layups and some of the lowest are last second heaves to beat the buzzer. 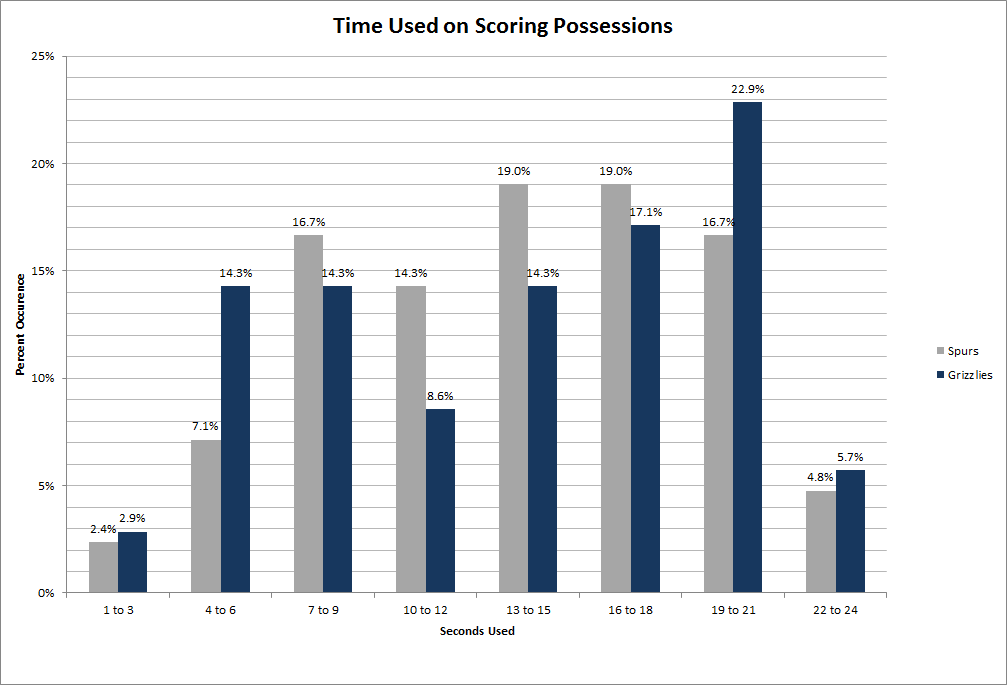 What we see is that the Spurs consistently spend their time in the 13-to-18 seconds of clock use, while also getting a fair number of buckets in the 7-to-12-second window. The Grizzlies, on the other hand, had the highest percentage of scoring possessions using between 19 and 21 seconds of clock. They also had a relatively high amount of quick scoring possessions in the four-to-six range.

This graph is helpful in demonstrating how quickly each team preferred to score the ball in Game 1. The Spurs more consistently scored within the 7-to-18-second range, while the Grizzlies scored more sporadically, with a high number of scores late in the clock. I don't think, however, that the graph effectively demonstrates what Pop means when urging his guys to speed things up. I think he cares less about when the shot is taken, and more about which shot is taken. Good passing inevitable leads to better shots.

The Spurs are a passing team. The brilliance of their offensive system is fully encapsulated in moments when guys like Danny Green, Kawhi Leonard and Matt Bonner swish uncontested triples because ball movement caused the opponents to miss a key rotation. That's the root of Pop's offense: forcing opponents to make decisions about whom to guard and how to guard them, and coaxing them into making the wrong decision. Last night Lionel Hollins implored his perimeter defenders to stay home instead of helping against penetration. Unfortunately for the Grizz, they had been so conditioned to double-and triple-team Kevin Durant that they consistently abandoned the Spurs' deadly perimeter shooters, resulting in a very lopsided victory for the good guys.

That being said, the Spurs still initiate their offense through ball movement, and the pace of play always seems quicker when the ball never hits the ground. In last night's game, the Spurs averaged 2.21 passes per scoring possession, as opposed to the Grizzlies 1.94 passes. In non-scoring possessions which ended in a field goal attempt, the Spurs' average passes per possession decreased to 2.09, while the Grizzlies' increased to 1.96 passes. Basically, the Spurs shot a better percentage when they passed more, while for the Grizzlies it didn't appear to make a difference. Using a bit of deductive reasoning, we could postulate that the Spurs generally get better looks when they move the ball. Spurs fans have seen plenty of evidence this season to support that theory.

When we look at the histogram below with distributions for passing in Game 1, though, we again notice some interesting and counterintuitive results. 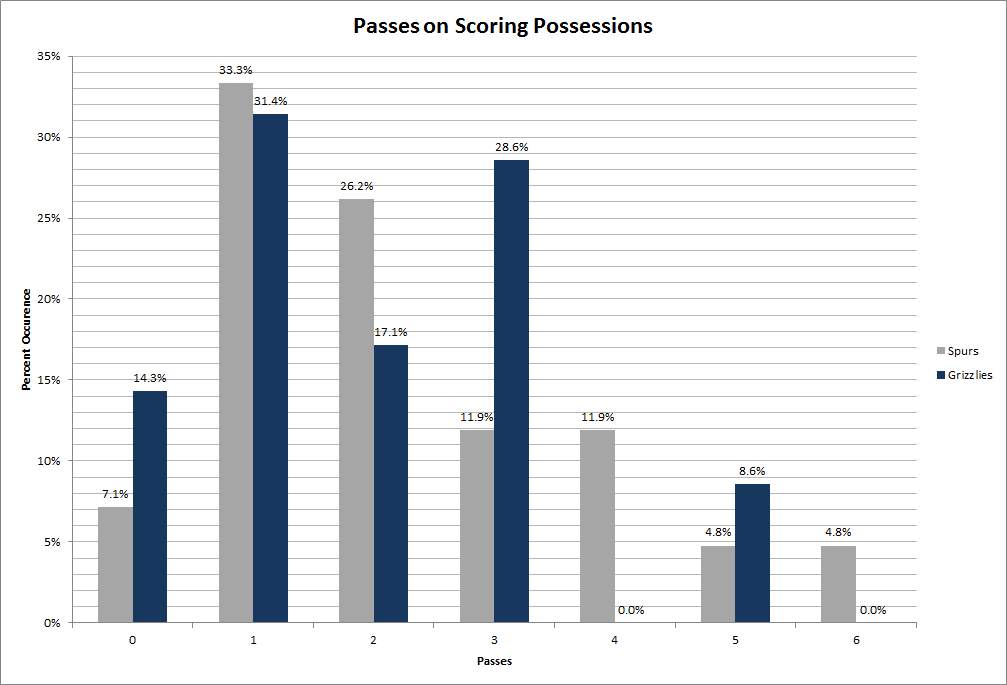 The Spurs converted the majority of their shots on one- and two-pass possessions. Many of these were of the drive-and-kick or drive-kick-and-swing variety, a routine which resulted in a playoff record 14 made three-pointers for the Silver and Black. The Grizzlies scored on a similar number of one-pass possessions, but they also used significantly more three-pass possessions and more than double the percentage of no-pass isolation and pick-and-roll possessions. They hardly scored on any possessions with more than three passes.

These results are curious, but they still don't give the picture of "pace" that really captures what Popovich desires from the Spurs. Let's take a look at one more idea which I think will get to the root of it.

When calling games for San Antonio, national TV broadcasters and Bill and Sean often refer to the ball movement as "crisp." It's a pretty ubiquitous term for describing basketball offenses which have a sharp and seamless flow, but perhaps it is better left to define potato chips and fall morning air in the Alps. The "crispness" of an offense is generally subjectively assigned by announcers, but I think it can be objectively qualified by some combination of ball movement, fluidity, and quickness.

Here's where we start to see why the Spurs' offense is like a fresh Mexican chile, while the Grizzlies more resembles Tennessee sorghum. The chart below demonstrates for Game 1 the percentage of scoring possessions in which players held the ball for a certain average amount of time, that is, the amount of shot clock used divided by the number of players to touch the ball (passes + 1). 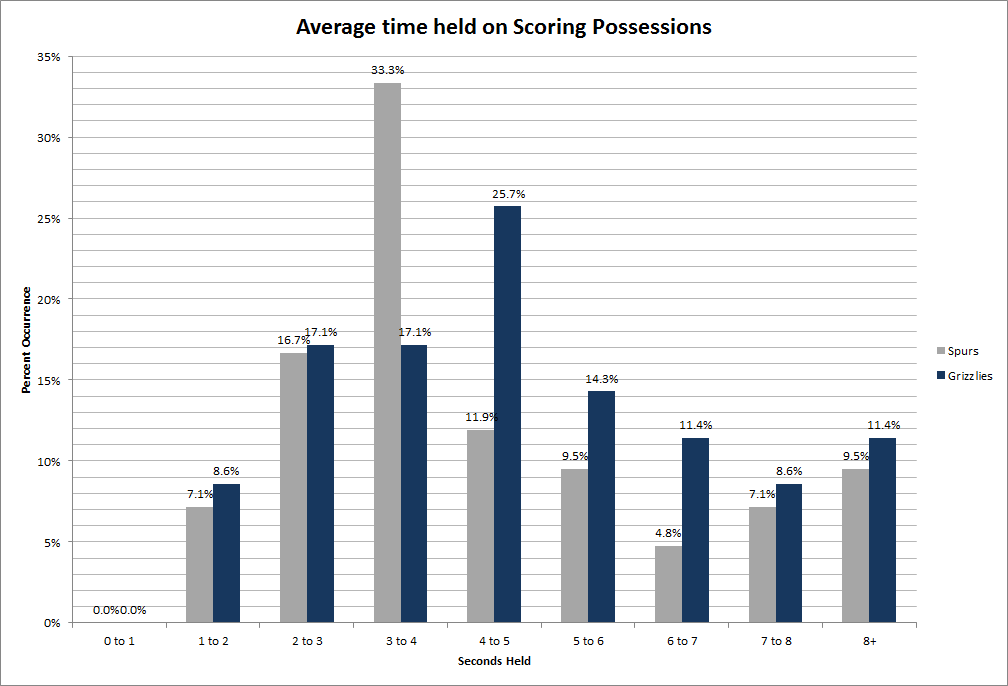 A third of the Spurs possessions had an average held ball time of between 3 and 4 seconds. The Grizzlies most often used 4 to 5 seconds. The Grizzlies had a higher percentage of scoring possessions for every stratum in which players held the ball an average of 4 seconds or more. This is what announcers mean by crispness, and it's what Pop means by pace. "The System" encourages players to look for a shot, and if they have a good one, to take it. Otherwise, that ball is a hot potato and you better dish it if you want to avoid the bench. The Grizzlies are notorious for disrupting this sort of offensive flow, but in Game 1 they regularly found themselves a step behind. Props to the San Antonio Spurs, who made 28 assisted shots to the Grizzlies 20.

The Spurs also ran significantly more pick-and-roll ball-handler plays than the Grizz, which often resulted in Tony Parker holding for extended periods of time. Once the ball left Tony's hands, it flew around the court until it found an open man. The Grizzlies often used post ups and resets which encouraged isolation from Tayshaun Prince or Mike Conley. It's how they run their offense, and it's a style of play which the Spurs sincerely want to avoid.

Keep the pedal down

Game 1 was as good as anybody who wears Silver and Black could have hoped for. Tony was scoring and distributing, the ball movement was "crisp," and the open looks found the bottom of the net. But, as Tony was quick to call attention to, the Spurs aren't satisfied or complacent. They only have to remember last year's Western Conference Finals to be sure they don't let their guard down. Game 2 will test how the Grizzlies can apply the brakes to the Spurs' offense, and in order for San Antonio to be successful, Popovich will continue to implore his guys to keep revving the engine. Don't expect Memphis to leave as many guys open on the perimeter next time around. The Spurs will have to make sure to aggressively stay ahead of the defense, and, at all costs, do not let the Grizzlies control the pace of play.