The Red Rocket lifts off

In 2011, Matt Bonner hit two heroic late threes in Game One against Memphis, but they were only to be forgotten after the Spurs gave up the game. In game one this year, Bonner got to take off like he never has before in a playoff game.

Share All sharing options for: The Red Rocket lifts off

I have to admit, when I saw Matt Bonner entering the game Sunday I was pissed. "What the heck are you doing Pop?" I thought to myself. I felt like I was watching something beautiful die. We were up 23-12 with 2:50 left in the first quarter and had played amazing defense. Z-Bo hadn't scored, but here it came...I knew it. The stout and attitude filled tough guy was going to beat up on the awkward red headed kid. Our great start to the series was done, I was going to watch what was so precious to me die, our early big lead. "NOOOOOOO,"* screamed so many Spurs fans when they saw the Red Mamba trotting onto the floor, his torso and his lower body looking like they didn't interact, his arms in his proverbial 45 degree angle position.

Bonner is, in the mind of many Spurs fans, the perennial playoff goat and choker. He goes from being reliable from deep in the regular season to shaky and ineffective in the playoffs. He's that guy that you want your friends to meet because he's really funny around you, then you take him around a group of people and he just blows it. His 3 point shooting percentage goes from 42% in the regular season to 36% in the playoffs and his points per game 6.5 to 3.4. Not to mention, his defense is normally not anything to brag about (save the fine job he did against LA in this postseason). Bonner has been continually disappointing in the playoffs over the years and he hasn't done the one thing he is known for. So Sunday when the Rocket checked in you know why you were frustrated, because as much as Bonner is fun to joke about, he's just never produced in the playoffs. So watching him come in to bang around with the likes of ZBo and Marc Gasol wasn't affirming, it was terrifying. You're afraid for Bonner's life, that the little red head is going to get pummeled by the Memphis hooligans that everyone fears. But four threes and a blowout later...you're worried and terrified that Bonner is going to kill his foe.

I was reminded of a scene in A Christmas Story today when Bonner was nailing three after three against the gritty Grizz. The unassuming nerdy kid, Ralphie is sick of Scut Farkus' constant bullying and torture. Farkus makes Ralphie and his friends say Uncle, robbing their pride and dignity as he brutalizes them, and he makes the walk home from school a constant dance with danger and treachery. Ralphie loses it one day when a snowball ala Scut greets his face and what results is a Volcanic like eruption. Friends and onlookers are terrified as the once bullied Ralphie verbally and physically abuses the evil Scut to no end. Kids are actually fearing for the one they all hate, Scut Farkus.

A Christmas Story - Ralphie Beats Up Bully (via Nick Gamino)

Sunday I was worried that in the Red Rocket's eruption he would literally murder a Grizzly on the floor. I was thinking Bonner was going to go Walter Sobchak on a Nihilist and bite Tony Allen's ear off. After the first three, I clapped, thinking it would be Bonner's nice contribution for the day, but a few seconds later he hit another, busting the lead wide open (29-12) and I couldn't hold it in, "RED ROCKETTTTT!" I exclaimed in utter euphoria, but my wife didn't understand...she hadn't been there for Bonner's years of shortcomings. I was watching something I had only seen once before, a Red Rocket liftoff, in a moment that TRULY mattered.

This other Matt Bonner performance occurred in the 2011 series against the Grizzlies, in game one where we were missing Manu. Bonner hit two clutch threes back to back in the fourth, the second gave us a 96-94 lead and could have been the difference in the series had a Shane Battier three not dropped. Who knows what would have happened had we taken game one? Bonner could have erased his playoff reputation as a goat two years ago with those two shots, but no, his moment was spoiled in game one. A Battier three and a pounding of ZBo in that series served as the snowball to Bonner's face and a knife in the Spurs. That series caused Spurs fans to lose hope and humiliation we rarely feel. It caused me to think the ship was sailed for good. Check out this tweet from 2011 the night we lost game six.... 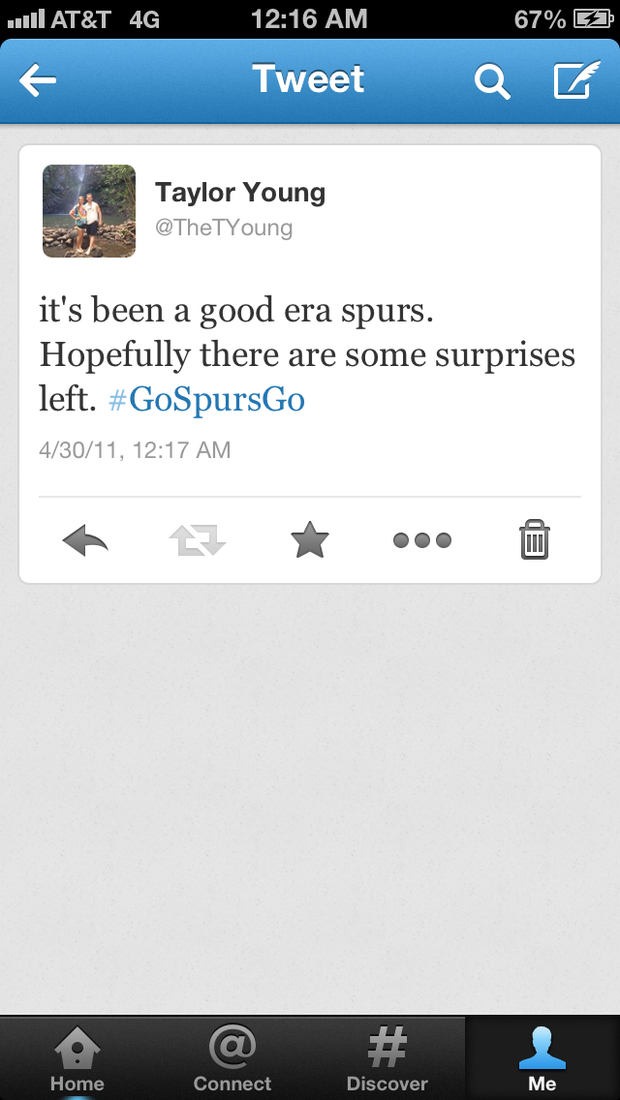 I had lost hope after that series and it might have all been different had Matt Bonner not been denied his moment in the sun. Had he not been denied his mini Robert Horry moment, his name might have a different reputation amongst us. So I have to believe, that the Red Rocket wanted ginger Revenge today. I have to believe that those threes-pointers were punches aimed at the Grizzlies face for stealing his former glory. The Red Rocket lifted off Sunday and I hope it can be something I talk about later. "Remember when Bonner went crazy against Memphis in the 2013 championship year? Remember how that fueled Bonner to win Finals MVP?" Just kidding, but Sunday Bonner had his moment and was a key factor in what I hope is a statement game on the way to a finals berth. Happy postseason liftoff Red Rocket, we have been staring at your launchpad and counting you down for quite some time.

-Man, after reading that tweet again...I really had given up in 2011. I like how I wanted there to be some surprises left and I stand by that. I want the surprise of a 5th finals berth and a pinky ring for Timmy and Pop.

-I think Danny Green remembers how miserable it felt to get benched in the WCF finals after he couldn't buy a shot. Man did he come to play Sunday? Six for Nine shooting, 50% from beyond the ark, some awesome D and he finished +28 for the game. Wow! Two other things I liked about Danny on Sunday...One being that his scoring arsenal continues to widen and he is getting points in different ways. Two, this kid is a freaking competitor, he opened the half with a missed three and then went down and made a three shortly after, but when the camera showed him up close he was clapping his hands at himself and yelling "man!" Even in his makes he isn't satisfied because he does not want to ever miss. That shows me he will keep shooting and be a huge factor offensively in this series and beyond (hopefully).

-Remember how Tiago Splitter was the key to this series? Well the Brusin Brazilian scored 1 point, recorded four fouls, played 17 minutes and brought down no rebounds. He was effective defensively for sure, but if you had shown me Splitter's stat line yesterday I would have assumed we lost by 22, not won by 22.

-I feel like this game has caused those on the Memphis bandwagon to further their cases for Memphis dominating the series. I don't get that. I do agree game two will be closer, Randolph will be better, and the Spurs wont hit 14 three balls, but the Spurs exposed major weaknesses in this series. I don't think Grizz advocates should be feeling anything close to affirmed after game one. They found NOTHING that worked for them, other than the fact Pondexter can hit open shots, and, well...we knew that already, so cool...

-The Spurs had 28 assists today. The most assists the Grizzlies had given up in a playoff game this postseason was 20, in their game one loss to the Clippers in round one. The Clippers and Thunder both got 19 assists twice against the Grizz in their respective series. What this means to me, and what I know from watching the games, is that the Grizzlies have been playing teams thus far who love isolation plays. The Thunder, by nature do not, but were forced to with no Westbrook. Isolations make it easier on defenses because it usually means the offense will get a bad look at the basket. The Spurs hardly ever Isolation, and are known for their ball movement. Yes, I know the Grizzlies have lost two game one's this postseason, but those were against one-dimensional isolation loving teams, not the San Antonio Spurs. This is a different ballgame.

-Getting game two should be treated like a must win from the Spurs perspective...in this guys opinion, which means nothing. But, I think we have to have it. Going into 3 days of rest with a 2-0 lead would be so huge, because after we won twice in Thunderdome last series, I have no doubt we can win in the infamous Grindhouse.

-I've rarely seen the Spurs lose this season, but I also usually go to way more Spurs games than I have this year. I have only been to two games and we have lost them BOTH...to Miami and Game two against GS. Maybe I am being punished because the first NBA game I saw in person this year was not the Spurs, but the Hawks and Lakers in Atlanta, which by the way...the Phillips arena (facility and atmosphere) sucks beyond imagination. Well, my confession is this...I am going to game two, and I don't want to be the bad luck guy...pray for me...we need a win.

-My prediction for Game Two: 97-86 Spurs. Yep. Red Rocket has one three off the bench and dazzles us for just a moment as he flies through mid air, but inevitably misses his Red Sky Hook.