Despite being the chic pick across the nation, the Memphis Grizzlies were overwhelmed last night from start to finish as the San Antonio Spurs roasted them 105-83. With Sunday's dominating performance, the Spurs took one step closer towards both the 2013 NBA Finals and avenging their 2011 playoff ousting.

It wasn't an "upset." The 2011 Memphis Grizzlies were a defensive buzz-saw that no one knew about, except for teams in the Western Conference. And not one playoff team looked forward to going up against those upstart Grizzlies, especially San Antonio.

The Spurs limped into the 2010-2011 playoffs, fresh off yet another gut-wrenching injury to guard Manu Ginobili. In the final game of the regular season, Manu Ginobili broke his non-shooting arm in between a Grant Hill and Tim Duncan collision. Not even a month before Manu's freak accident, Tim Duncan severally sprained his left ankle against the Golden State Warriors. The Spurs were seriously hurting but, regardless of health, that Spurs squad didn't have a prayer that post-season anyways.

San Antonio was in a transition phase. Tim Duncan was obviously no longer capable of handling the role of being the primary offensive focal point and 2010-2011 proved to be their first true season of being "Tony's team." Manu Ginobili finally played an 80-plus game season but was performing at an inefficient level. The Spurs shipped out the old hats of Bruce Bowen, Fabricio Oberto, and Kurt Thomas in exchange for Richard Jefferson, a (then) 20 point-per-game scoring forward. The idea was the give the Spurs another weapon out on the wing for Tony, Manu, and Tim to kick out to but the Jefferson experiment flamed out in a hurry.

The Spurs once notorious defense finally descended to middle-of-the-pack quality and the memories of championship defense felt like ages ago. Although the Spurs certainly had the mindset and some defensive pieces, they just didn't have the right combination. George Hill didn't fit right with Tony Parker and was too small to consistently man the two-spot. Tiago Splitter was a rookie still recovering from injury. Antonio McDyess had the mind and heart but no longer the body. Tim Duncan was slow, tired, and overloaded with defensive responsibilities (Tim ended with his second-worst defensive rating of his career that season). Jefferson, who was once a capable defender early in his career, had lost all comprehension of the subject after spending most of his career with offensive-oriented teams.

Against the Memphis Grizzlies, the Spurs were simply outmatched player-to-player. Michael Conley made Tony Parker's life a living hell. With a bad wheel, Tim Duncan was a shadow of himself and the Spurs front court of Antonio McDyess, DeJuan Blair, and Matt Bonner (rookie Tiago Splitter barely played) were hilariously undersized against Zach Randolph and Marc Gasol. Richard Jefferson, the offensively-limited George Hill, and rookie Gary Neal were matched up against a grizzled lineup of bigger, athletic defenders - Tony Allen, O.J. Mayo, Sam Young, and veteran Shane Battier.

The San Antonio Spurs spent most of that series just picking themselves back up off the glossy hardwood floor.

But 2011 might as well be 1911 because the Spurs team the Grizzlies face this time around are decades apart in both appearance and talent. Tony Parker is now the unquestioned leader of the Spurs offense. Tiago Splitter has emerged into a solid defender alongside Tim Duncan, who somehow figured out how to reverse time (Duncan's 2012-13 defensive statistics have returned back to his championship years). Boris Diaw has provided the Spurs with even more spacing to operate their motion offense (something that barely existed in 2011). Even Matt Bonner has developed into a dependable player on both ends of the court. The Spurs backcourt improved in youth, size, speed, and athleticism with the additions of Danny Green and Kawhi Leonard. And the young, defensive-minded Cory Joseph has proven that he can confidently operate the Spurs offense under the bright lights of the playoffs.

Perhaps most striking is that the two teams have diverged in terms of pace. Each was middling in 2011, but the Grizzlies have become one of the slowest teams in the league and the Spurs one of the fastest.

- Cameron Archer in his article, "Forget 2011, the Spurs are ready this time."

As Cameron pointed out in great detail in his May 18th post, the Spurs offense has evolved into a high velocity system of murderous efficiency. The previous season was a coming-out party for San Antonio's offense and Spurs fans (and national media) spent most of the lock-out shortened season with their mouths agape. These weren't the "boring" Spurs that we've all become accustomed to. The 2012 Spurs light burned fiercely but was eventually snuffed when the team finally hit adversity in the Western Conference Finals.

The Spurs stayed the course over the offseason, opting to entrust their 2013 title chances with their aging core and the development of the young supporting cast. Now, with the offense still burning the floor and with the defense back to top-ten status, the Spurs are back at the doorstep of the NBA Finals again. They may not be able to pay the Oklahoma City Thunder back for last year but the Spurs are more than happy to settle an old score with another rival.

-Pop on whether or not he told his players to not get complacent with a lead. 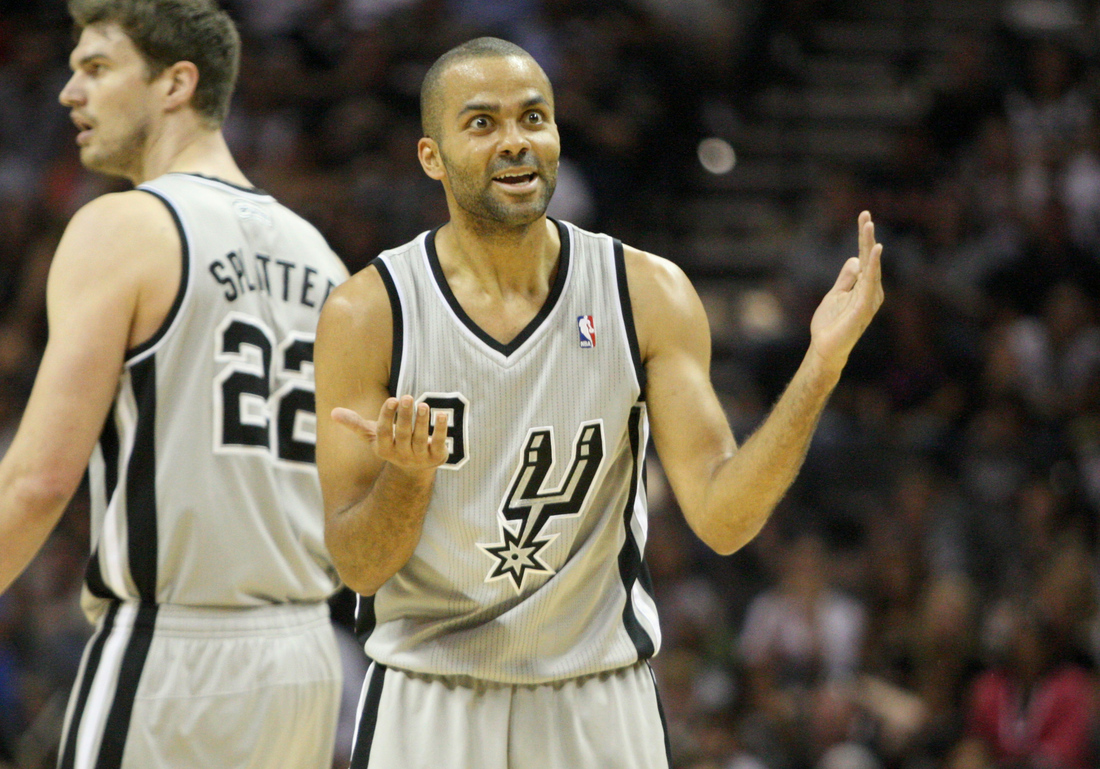 Spurs fans, I ask a simple task of you. Print out Tony's face and "Cage" someone. - USA TODAY Sports

The San Antonio Spurs blitzkrieged the Memphis Grizzlies for the most of Game One but it wasn't all ruthless efficiency (121.9 offensive rating). For a moment, there was a part where things looked a bit shaky.

In three minutes and 15 seconds, the Spurs watched a 17-point third quarter lead dwindle down to just a two possession game. A Jerryd Bayless steal and dunk cut the Spurs lead to 6 points with roughly four minutes remaining in the quarter and was the cap on a 13-2 Memphis run lead by Qunicy Pondexter's seven point outburst.

Coach Popovich finally called a timeout after watching his players go 1 of 4 from the floor along with two turnovers during the Memphis scoring run. The Spurs responded with an 11-1 run to close the quarter, 9 of those points contributed directly by Manu Ginobili (6 points and an assist). After that, the Memphis Grizzlies never got closer than 14 points, or within 20 points after the 7:29 mark in the final quarter.

The San Antonio Spurs are an incredibly disciplined team and they rarely ever falter during the streaks and runs that frequently decorate a game. Hell, they expect runs like the one Memphis pulled off to happen. "It's basketball," as Coach Pop once said. Players are going to get hot, get going, and it's on the team to stay calm, cool, and collected in order to right the wrongs. The previous series against the Golden State Warriors was a perfect example.

Tony Parker was the best player on the floor last night and his aggression early on in the game set the tone for the full 48 minutes. Parker directly contributed to 16 of the Spurs 31 first quarter points through a perfect 3-for-3 shooting and 3 assists. Memphis gave Tony all the space that he could ever want and, whenever the help defense rotated, was finding the open man with ease.

Zach Randolph, the focal point of the Memphis Grizzlies offense, was completely shut down. Randolph is averaging 14.7 attempts per game but was unable to operate against the collapsing defense of San Antonio or one-on-one against Tim Duncan and -cough- Matt Bonner. The Spurs frontcourt also did a terrific job of preventing Randolph getting strong position down low.

Randolph was also a major liability on defense against the Spurs screen sets and especially when the Spurs ran out their stretch-four players, Matt Bonner and Boris Diaw. 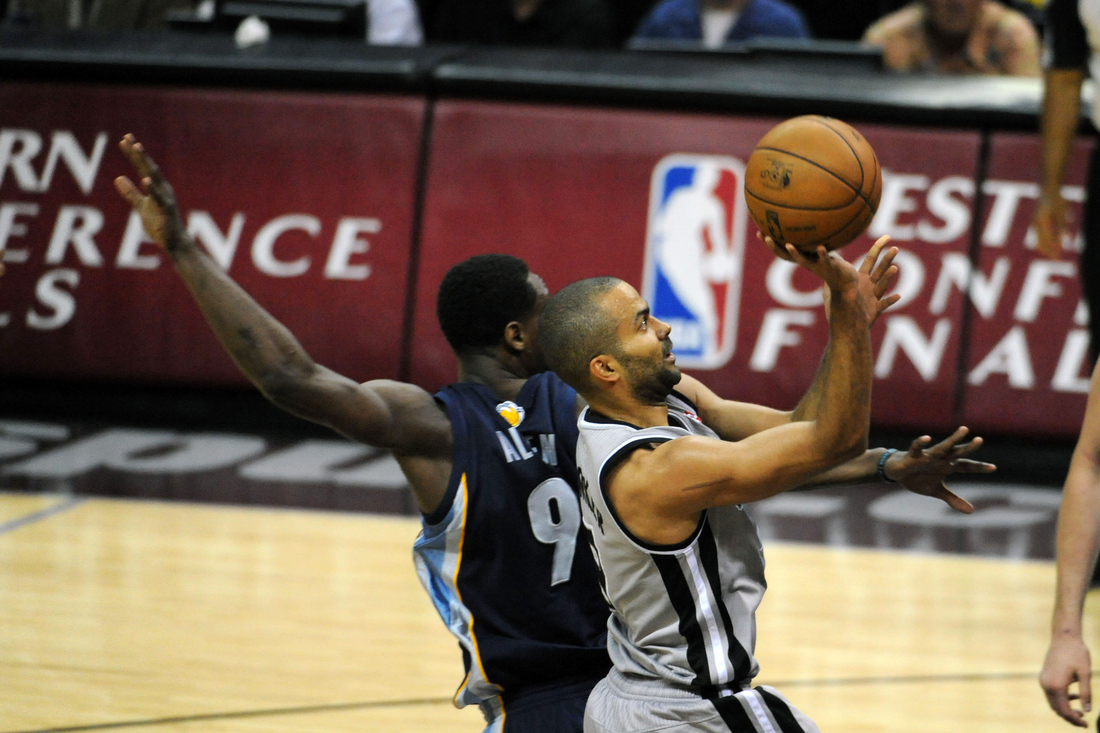 Tim Duncan being forced to appear in a Will i Am video is still the funniest thing ever.

Bonner-Diaw in. They're going to somehow keep the Grizz out of the paint and it's going to be bizarre.

Funny thing about all the Grizz love is that these same people HATED the Spurs when they were winning with ugly grinding games 10 years ago. 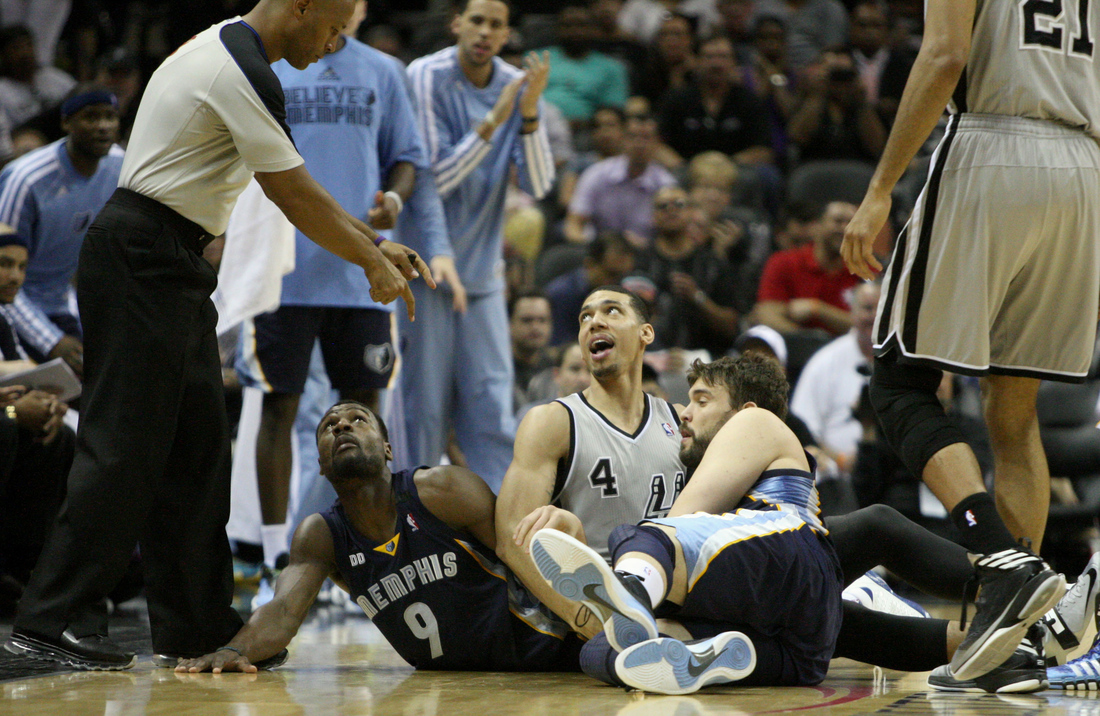 ...do more of the same. Load up defensively on the Grizzlies frontcourt, primarily Zach Randolph, and force the rest of the Memphis to come up big in the Western Conference Finals (a place most of the team has never been before). Offensively, the Spurs need to keep pushing the pace and striking before the Grizzlies can set-up their defense. The Grizzlies perimeter defense will be a bit more tenacious in the next game so San Antonio also needs to continue with the fantastic ball and off-the-ball movement.

I can promise you this - Nobody's happy in our locker room because we were up 2-0 last year and we lost. It's just one game. It means nothing. We still have a long way to go.

-Tony Parker after the Spurs victory.