A few years ago I set out on a small adventure: I would travel to the United States to finally watch my Spurs live, and then follow them around the country like a half-hearted stalker as they started their celebrated rodeo road trip. As with any self-respecting adventure, mine had all the classic ingredients: unforgettable moments (meeting Manu), low points (being stuck in the middle of Portland on a rainy night - or as they call it in Portland, "a night"), loveable sidekicks (Wayne Vore), a handsome protagonist and cannibals. Lots of cannibals.

I shared my unexciting adventures in a travelogue that I posted in this very same site (LINK!), and all too soon I was back home, busy with the boring part of life that suffers from a distinct lack of drunken escapades through Californian beaches. While at home, I finished my account of the trip, but being a fundamentally private person I kept the most important part to myself: you see, during those short three weeks in the USA, I met the woman who would become my wife.

I wrote about it at the time, in a sort of personal diary that I have only shared with her. It's not something I usually do, but there is something to be said about revisiting your life years later, knee-deep in the warm murkiness of nostalgia. But as much as I'm willing to publish snarky comments online about my struggles to breach the cultural divide, I'm reticent about inviting anonymous strangers into the inner workings of my love life. So I kept it private, and only mentioned it to my closest friends in PTR. Why is this relevant? Because as some of you know, my wife is none other than Queness - yeah, that Queness, the one that sleeps among the ashes of dead cats, the one with the top hat fetish, the one that is quick to threaten with violence during game threads. I call her Amy.

We met before my first ever NBA game, when a group of PTRers got together at Rosario's to enjoy some pre-game margaritas. She ranked the lowest in the "Understanding WTF the foreigner is saying" meter, so you can imagine that it was not my smooth dulcet tones that won her heart - and I suspect my rugged good looks had little to do with it, too. There were hurried dates, many text messages and e-mails, an impromptu All-Star connection, and then a goodbye full of promises.

You know what they say about long-distance relationships? It's all true. They suck. SUCK. Suuuuuuuuuck. We got through a year and a half of it only by sheer chutzpah and constant chatting. We traveled back and forth between Argentina and the US as often as our wallets allowed, and we squeezed every moment together for all the fun and closeness we could. And when the bank accounts were empty, and Google Chat just didn't cut it anymore, I moved to San Antonio to see just how good we were together.

It turns out we are awesome. Or at least we think we are awesome, which is not the same, but it's close enough for me. We married two weeks ago, and some of my closest PTR friends came: Manuwar, CapHill, JRW and janieannie. During the ceremony, the minister mentioned Pounding the Rock, too, which I think is probably a first for this blog. And on the long reception table, where the wedding cake and a cornucopia of tasty sweets had been set up earlier, Spurs-themed cookies could be enjoyed by the guests. It was a nice wedding.

Here's a confession: Even today, if I stop and think about it for a second, I cannot help but cringe just a little. I met my wife on the Internet? On a Spurs blog? Wha-? It certainly doesn't sound like the prologue to a wonderful romance worthy of Tom Hanks and Meg Ryan - and I haven't even mentioned the Irritable Bowel Syndrome part yet. In the end, though, I think happiness is rare enough that it should be cherished regardless of a cliched inception.

So. Why am I sharing it with you guys now, you may ask. Well, because none of this might have happened if we hadn't found this tiny corner of the Internet. I truly believe that PTR has always fostered the participation of a certain kind of fan, a certain kind of person. I have been fortunate to meet many of the site regulars through the years, and each and every time it has been a pleasant experience, like meeting with old friends whose faces have undergone massive reconstructions. I doubt that many other blogs could have created a space for me to meet someone like Amy, and for that I will be forever grateful.

PTR helped me find the love of my life. Beat that, Google.

(Or "What I learned about marriage from Tim Duncan")

When one is standing at a threshold of a Major Life Event, one is inclined to seek out meanings, parallels and pearls of wisdom. There is no shortage of places to look for these things, but they seem to carry more weight when their source has some intrinsic meaning itself to your life. In my case, there is particular fertile ground for the hunt for relevant wisdom in Spurs basketball.

We only met because of the Spurs. Finding each other in the wide world would have been impossible without Spurs basketball--I lived in Texas, he lived in Argentina. No other corner of the Internet would've done it. Only the alchemy of this team--the greatest power forward, a wily Argentine guard, a Hall of Fame coach--and a blog we both enjoyed could make it happen. You might understand when I say I feel like we owe the Spurs a lot. It isn't the only thing we have in common--we both owned VHS copies of Mystery Science Theater 3000's "Pod People"--but it's been a thing we have had a lot of fun with, and of course, it was the commonality that launched a thousand emails. It was three years ago now that he came to San Antonio to see the Spurs and meet the blog people, and now here we are, past our wedding.

Who would have guessed?

(Actually, the blog did, although you were joking. I have to say: in hindsight, good call.)

So, with the Spurs having played such a serendipitous role in bringing about this marriage, I have to think there must be some of that relevant wisdom for us there. And I can see it in the most relentlessly consistent player, the foundation upon which an astonishingly successful team has been built. Tim Duncan, what can you teach me about marriage?

There's a lot of trouble in the world. They will challenge you, your relationship, your family. You will need to defend. Protect your basket and help your teammates do the same. Anticipate, get a hand up--and don't let troubles go up on you.

The basics matter. The fundamentals of a relationship must be sound; the things that advance your game are the moves that don't have a lot of flash. Great vacations and awesome presents are the slam dunks and 360 turns--memorable and good for the highlight reels. But most points aren't scored that way. It's the smart bank shots and short jumpers that get you to your goal, and the numerous, small daily chances--kind words and help with chores--build a winning life together.

Hug the ball, hang on the rim. The little signs that indicate to you and others that you're ready to play the game. Keep your life rich with symbols that mean something to your marriage--cuddle at night, always kiss goodbye--that illustrate you're checked in and ready to play with your team.

How far can you go as a contributor? Not far at all if you aren't healthy. If you take care of yourself and address your physical and mental needs, you can continue to put up the big numbers--even as your time in and experience raises your value as a teammate.

You draw a double team. Your shot is off. Your teammate has the better look. There are many reasons to kick the ball out and not take that shot yourself. Trust your teammate; his success is yours and yours is his. Set the pick, move your feet, do your part for the play. Hero ball alone doesn't make a winning season or a solid marriage. Always remember you're working toward the same goal.

When your starting point guard and the backup go down, what do you do? Say that you might finally getting a shot at playing PG. Things happen--they always will--and whether they are minor setbacks or major obstacles, being able to laugh will help you and those with you to deal and go on.

So I'll take the lessons of the Spurs, rich with meaning as they are for me, and apply them. Good game plans are worth sticking to. 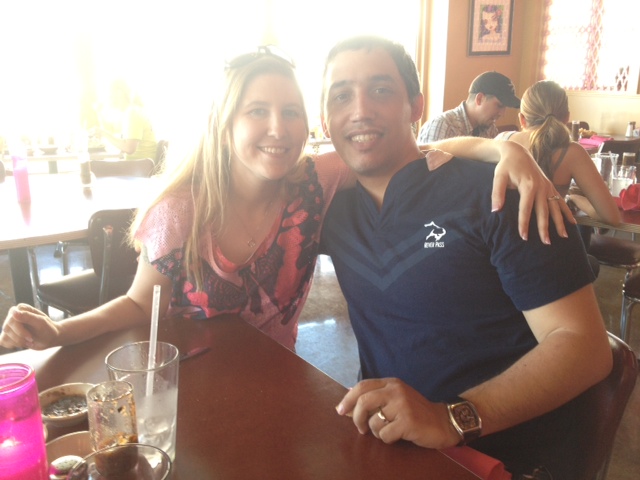 David's note: (Taken the day after we married, while having lunch at Rosario's - the restaurant where we met. I look stupid, but she chose it because she doesn't love me.)