The Russian's Cut & It's a Bad Cut: How Stephen Curry and Klay Thompson went from being invincible to average

Stephen Curry, just one week ago, was heaving balls off the ground and making one footed threes. He looked like he and Klay Thompson were going to shoot the Spurs into a depressing offseason. Now the Warriors are down 3-2 and Stephen Curry doesn't look quite so invincible anymore.

Share All sharing options for: The Russian's Cut & It's a Bad Cut: How Stephen Curry and Klay Thompson went from being invincible to average

The Milwaukee Bucks featuring Glenn Robinson, Sam Cassell, Ray Allen and some guy named Jason Caffey (Who in the world is he?) beat my Spurs on March 31st 2001. This was the first Spurs game I had ever seen in person; a loss in the AlamoDome to Jason Caffey's bunch. Since then, I have seen between 100-120 Spurs games in person and way too many on TV. The Spurs were, and are, one of my dad's and my favorite shared experiences. We got a mini season ticket package and watched as many games as we could together. Needless to say, we have gotten to watch the Spurs compete against some great players. I've seen Shaq, Kobe, Dirk, Durant, LeBron, T-Mac, AI, Carmelo, Nash, Amare, CP3, and even Brian Scalabrine, all play the Spurs. A lot of those guys have had big moments and games against San Antonio, but none of those players ever struck the kind of fear into me that Stephen Curry did last week.

My dad and I were in agreement: never before has another superstar (other than Jason Caffey*) made me believe that every single one of his shots were going to go in. I was terrified of this little man. He was literally unstoppable. I guess somewhere between the ball that rolled on the ground then half a second later was at the bottom of the net and the flying one footed three (a shot I take in Horse...and miss), this kid really made me believe he was invincible. Bruce Bowen couldn't have stopped him, nor the MonStars. He was shooting at the Spurs like they had just pillaged his village and murdered his livestock. Not only did I feel like Curry was telling me and the Spurs faithful to take that for not knowing how good he was, I felt like he was sucking the soul out of the Spurs with a Dementor's kiss.

The Spurs were Apollo Creed in the fourth Rocky, coming in cocky and thinking they'd dispatch the Dubs quickly, just like Creed expected to do to Ivan Drago. Well soon after the celebration and James Brown music, Apollo Creed was dead. And after Curry had gotten his evil twin Klay Thompson involved in game two, the Spurs appeared ready for a funeral as well. Sure, they had a 1-1 tie, but they were heading back to Oracle, after two games on their home court in which they had led for a total of 137 seconds of regulation. All of my Spurs friends were feeling like Apollo Creed's wife after watching these first two games. We were feeling like Duke the Trainer begging someone to throw in the towel. Stephen Curry, the little man from Davidson, had become the NBA poing guard equivalent of a roided, Russian, Spur-Killer.

Just look at his shot chart from the 3rd quarter of game one! Most people would kill for a game where they're that efficient. Every one of those dots is a punches he landed to the face of the Spurs' defense. 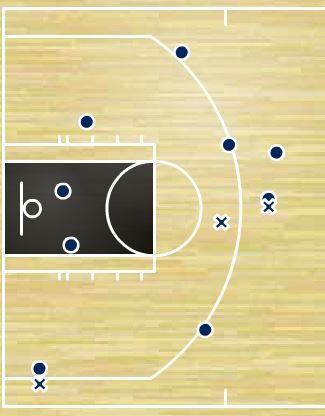 He even got his evil Russian assassin Splash Brother in on the action. Curry's Game 1 was Drago dismissing Creed with a snarling "You will lose" and Thompson's Game 2 was Drago telling Rocky "I must break you." By the first quarter of Game 3, the Italian Stallions of the league seemed to be getting haymakered by Curry and the Funky Bunch; the Warriors were up 19-14 and Curry had 8 first quarter points.

But, something changed after that. Curry started to look a lot less like Michael Jordan and a lot more like an exhausted 25-year-old kid in his first ever playoffs. With every shot he missed, my fear of him got smaller and smaller. I no longer felt like every single shot was going in. Since the historic Game One performance where Curry shot so well he almost got his teammates suspended because their celebrations practically carried onto the court, he has shot just under 35% from the field and 34% from three. When he rolled his ankle in game 3 trying to evade his own personal kryptonite (Danny Green), we realized he was a human. Just like Duke realized Drago was "not a machine."

Now here we sit, up 3-2 with a chance to close out the nation's media darlings on Thursday night in Game 6. It seems like many moons ago when Curry was thanking the Spurs for posing as dummies during his Game 1 third quarter shootaround. The Russian Curry is now cut, and cut bad.

The Golden State point guard is coming off a game where he made four shots, one three (14% from downtown), never visited the charity stripe and posted a +/- of -21. Rocky would've loved for the Russian to box that badly in Moscow, it would have saved him brain damage and a terrible plot to a fifth movie!

What's crazy to me is that the Spurs didn't come up with some special formula to defend Curry, leading to this decline. In no way was I expecting what has happened. After Thompson's game two performance, I thought we would let Curry have 40 points a game like we used to let Nash and Amare have and force Harrison Barnes and Draymond Green to beat us. Well, we have allowed the Barnes and Jack's to beat us, but nothing special has been done to Curry. We have simply cut off his spacing, chased him around a lot, shown him a variety of defenders and used Kawhi Leonard's massive hands to strangle his Splash Brother (which effectively has crushed his spirit, watching his brother die). Sure his ankles don't help his case and they help the Spurs D, but it truly has been remarkable how far Curry has fallen from Immortality to a -21 player in 8 days. This footage of Parker playing D on Curry really captures what the Spurs D has done to the young phenom since Game 1.

Just look at that. Parker's physical and pestering the entire time. He doesn't let Curry break away to a spot on the floor with spacing for a jumper or easy basket, and Curry eventually tires out and a turnover is forced. Rocky knocking out the Russian effectively ended Communism and Gorbachev immediately responded by knocking down the wall, but eliminating Curry's Warriors this year won't mean the end of anything for them. The Spurs seem ready and poised to knock the Warriors out in Game 6 and end their magical run for now, mainly because Pop isn't treating this team like a rash that needs to go away (as he alluded to in his post-game presser), but a fighter who needs to be knocked out. The Spurs have learned their lesson underestimating this team, and this could be the start of a great rivalry. The Dubs are starting something very special, with a young star who's able to get in a zone where he can truly make any shot he takes. He just some tape around those ankles, a healthy David Lee, and an added facet to his game, so he can get to the basket and the line more consistently. This kid isn't going anywhere, though he and his boys may be cut, eventually it'll just be a scar to reminisce about.

1) A buddy of mine (Jake), was texting me after the game and we were amazed at the crowd's reaction to T-Mac every time he touched the ball. They were acting like they were front row at a Beatles concert!

2) If T-Mac's silky smooth jumper had fallen and if Blair had made his one-footed goofy runner/floater, T-Mac would have recorded the illustrious, but elusive...quadruple Deucel...2 points, 2 assist, 2 rebounds and 2 blocks. Well done, T-Mac, the Orient has taught you well.