The Spurs wrapped up the Western Conference Quarterfinals with brooms in hand, thanks to continuing dominance by the members of the Big Three. They have continued to meet (and exceed) expectations throughout the first round, and we will continue to track their performance as we move into the conference semis.

Share All sharing options for: Tracking the Big Three: First Round Wrap-up

The idea behind this series of posts was that I would track how the Spurs’ Big Three were trending on Twitter throughout the Western Conference Quarterfinals and playoffs following each game. If you are frequent visitor to Pounding the Rock, you probably noticed that I failed to follow up after Game 3. I’m sure this devastated you, as I know you all just sat in front of your computer screens frantically hitting the refresh button to reveal my next post. Or you didn’t notice at all. I am brazenly ignoring the possibility of the latter in order to maintain a healthy level of self esteem.

Do you want to know why I didn’t follow up on Game 3? I was in Alabama. ‘Tis a dark place where football reigns supreme (even in April), and up until yesterday I knew more about each Crimson Tide football player’s draft position than I did about Games 3 and 4. Thanks to magnificence of DVR, I have now caught up and am prepared to track how Timmy, Tony, and Manu rounded out the sweep of the Lakers. If you need to catch up, read my update following Game 2.

The first round matchup was somewhat two-faced. The Spurs certainly controlled the first two games in SA, but they didn’t really have them locked up until time expired. Heading into LA, I was concerned the Lakers would draw enough energy from their faithful home crowd to snatch at least one game. Instead, they appeared willing to lie down and submit by the end of the first quarter of Game 3. The Spurs displayed systematic authority of the court over the subsequent seven quarters of basketball, and Pop was able to limit the minutes of the Big Three with an eye towards rest and health for the next round. As such, the trend numbers may be a bit of a wash, but there are certainly some positive aspects we should note.

Timmy really found his groove in Game 3. He set the tone early (one-handed ‘oop anyone?), and made the Lakers pay by consistently hitting his mid-range jumper. His dominance in Game 3 set the trend for the remainder of the series, a series in which the Spurs trailed the Lakers for only about five minutes total. In Game 4, he was consistent, if nothing else, which is exactly what the Spurs need from Duncan.

Here is Timmy’s statline from Games 3 and 4:

That is some ruthless efficiency from the centerpiece of the franchise. Game 3 was exceptional, Game 4 was solid, and Duncan continued to provide consistent production on both ends of the court. 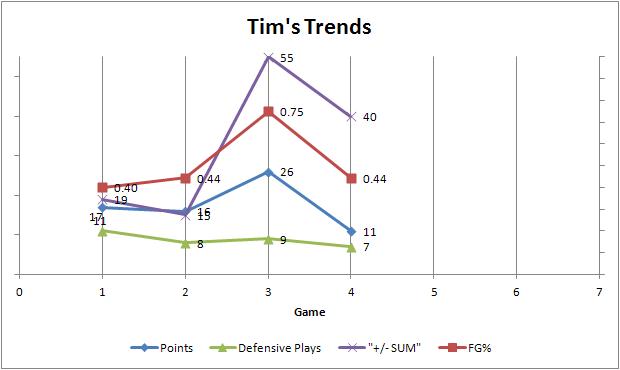 Duncan really peaked in just about every category for Game 3, and while he regressed back towards his means for Game 4. What really stands out his is dominance in the +/- against Howard and Gasol. In the first two games, the Lakers two big men threw everything they had at Timmy. Yet all of Pau’s finesse and Dwight’s physicality couldn’t sway the Big Fundamental, and in the first quarter of Game 3, Duncan broke them down. Even in Game 4, where his points and defensive stats dropped below average, he maintained a ridiculously high +/- compared to the opposing bigs. Duncan brought the reckoning against arguably the best tandem of bigs in the league. Getting it done at 37 years of age, Timmy continues to take our expectations, exceed them, and then systematically disintegrate them with a plethora of deft post moves, smooth mid-range jumpers, beautiful footwork, and extraordinary BBIQ.

In the third quarter of Game 2, Tony looked as though he had finally had enough of the weakness that had plagued him over the last couple of months. Most Spurs fans recognize that a healthy and aggressive Parker, operating as the driving offensive force on this team, will result in a deep playoff run. Fear not, for the Wee Frenchman emerged from his cave of mediocrity, laughed at the idea of running from his shadow, and continued to impel the offensive excellence of the Spurs’ first unit.

Here is Tony’s statline from Games 3 and 4: 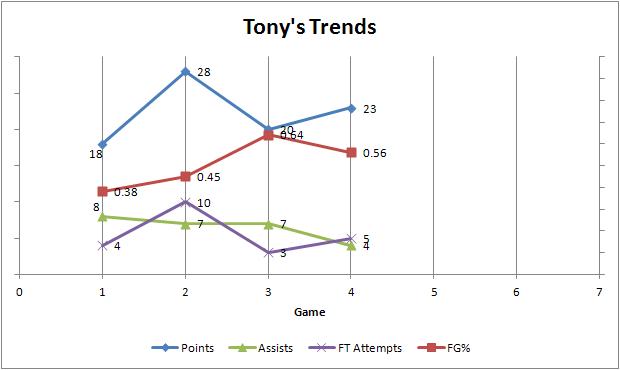 In the first post I suggested that a basic metric for the return of MVP-Tony is his ability to consistently achieve a FG% above .500. Of all the statistics I am tracking for the Big Three, I feel that Tony’s shooting is most fundamentally tied to our playoff success. Tony played limited minutes in the last two games of the series, yet managed to post numbers similar to those in his 37 minutes of Game 2. This is exciting news for all Spurs fans, especially if the trends can continue into the Western Conference Semis.

Pop continues to throttle Manu’s minutes, cautiously maintaining a 20 minute cap during the first round. The Argentine played masterfully in games 1 and 2, and while his numbers declined somewhat in LA, he nonetheless continued to play efficient, and most importantly, healthy ball. Let’s be honest, we all held our breath when Manu returned to earth after stuffing Dwight Howard. After he sprung back up, we exhaled, and allowed ourselves to revel in the glory we just witnessed. Even in his limited minutes, Manu keeps providing the spark that has ignited so many past Spurs championship teams. Hopefully, Pop loosens the minutes-leash next round, if only so we can witness more Manu-moments like that beautiful game 4 slam.

Here is Manu’s statline from Games 3 and 4:

Ginobili may have appeared to regress some in these last two games, but I postulate that this was simply due to the nature of the games themselves. That the Spurs were going to finish this series was never really in doubt after game 3, and really so the essence of Manu Ginobili – slashing drives, step back triples, and pinpoint passes all delivered at crucial moments in the game – were never required, if only because there really were no "crucial" moments in the last two games. So while he showed some deterioration numbers-wise, Manu is likely biding his time and waiting for those moments in which he can deliver the knockout punches. 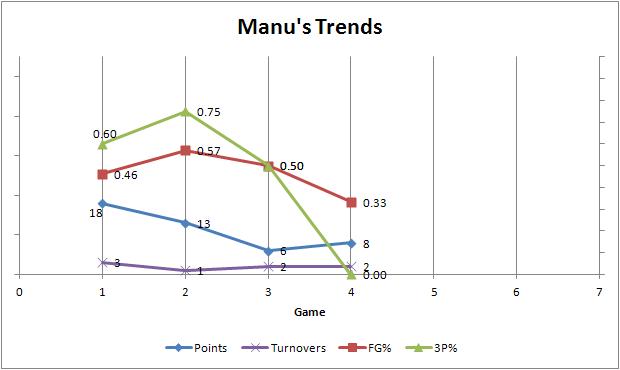 Let’s hope that 0-3 night from beyond the arc was just a blip for Manu, because otherwise he has been solid, if not ridiculous, from range. He continues to round out his box score with a variety of assists and defensive plays, and assuming he becomes more engaged as the games intensify, Manu should continue to be the razor-sharp edge to the Spurs’ surgically precise offense.

Waiting for the semis

At least one member of the Big Three has been huge in each of the playoff games so far. Manu carried the team in Game 1, Tony found his legs in Game 2, Duncan controlled the court in Game 3, and in Game 4 the Lakers rolled over with little resistance. The Spurs have won 14 of their last 18 playoff games, and thanks to the Nuggets Tuesday night victory, they will get a couple more days of rest before facing off against either Golden State or Denver. 4 down, 12 to go.