The San Antonio Spurs mercifully finished off the injury-laden Los Angeles last night. Tony Parker and Kawhi Leonard led a balanced team effort but a Dwight Howard ejection was the talk of the game.

Share All sharing options for: Morning Rehash: Swept Away

Up 3-0 going into Sunday night, the San Antonio Spurs wanted to close out the series for the sake of resting up their still dinged-up squad. While they surely weren't looking past the Lakers, no team in NBA playoff history has ever come back from a 3-0 deficit. The Lakers were missing both their first and second-string backcourt for half of the series but, even if with a healthy squad, the Lakers were never going to win this series. The gold squad lacked a bench and had their stars running on fumes at the end of season. Kobe Bryant was magnificent for most of this season, eventually self-propelling the Lakers into the postseason.

But the main reason the Lakers were never going to win was because of the smiling man below...

In the playoffs, Tim Duncan in his career is first overall in blocks, fifth in rebounding, sixth in field goals (eight in attempts), seventh in points, and currently tied for seventh in games played with both Karl Malone and Danny Ainge. Duncan is eighth in minutes played and will most likely reach sixth by the post-season's end.

Timmy is top ten in those playoff categories and, if he continues to contribute one or two more seasons at this level, he'll finish near the top all across the record book. I know we at PtR laud Tim Duncan endlessly but this year has just made his legacy grow even more. Tim's played amazingly for so long but to be at the top of the league AGAIN at age 37? Just... wow.

On Sunday, the Lakers were out yet another starter as Metta World Peace needed to have fluid removed from his knee. World Peace had his meniscus removed not too long ago and was basically playing on one and a half legs. Even though I dislike him as a player, I have to admit my respect for him went way up after playing just because he knew the Lakers really needed him. The Lakers needed to rely on Dwight Howard and Pau Gasol throughout this series if they were going to pull out a win but the Spurs overwhelmed the two big men by packing the paint. San Antonio essentially dared the Lakers' guards to beat them in each game.

The Los Angeles backcourt stepped up at some points in game 3, as first time playoff starters Andrew Goudelock and Darius Morris combined for 44 points (most of them coming in the meaningless second half). Pau Gasol had a triple double (11 Pts, 13 Reb, 10 Ast) and Dwight Howard contributed 25 points and 11 rebounds. Outside of those four players, the remainder of the Lakers team combined for 9 points and you just don't have a shot against the Spurs with production like that.

In what possibly might have been his last game as a Laker, Dwight Howard failed to step to prevent the sweep. In typical fashion, he was ejected from the game after arguing with officials on a no-call tangle with Aron Baynes. This was Dwight's second technical foul, with first occurring after an elbow to the back of Cory Joseph's skull. The sad thing about that first technical? Dwight Howard got the foul call, making his his extra-curricular activities absolutely pointless.

"You know what, it's hard to answer that question because I'm playing here and now to get to the next round. I'm not worried about the history of whatever or the series of whatever...However you want to put it in the book or place it in whatever chapter, we won this series and we're moving on and we're happy about that."

-Duncan on how it feels like a chapter in the fabled Spurs-Lakers playoff match ups without Kobe.

Check out J. Gomez's recap if you haven't already.

The Spurs put the game away in the second quarter, only allowing 14 points by Los Angeles - the lowest in the entire series. After being up only 6 after the first quarter, the lead ballooned to 18, essentially putting the game out of reach. The second half was closer (51-48 in favor of the Spurs) but only because the Lakers were desperate and the Spurs had the bottom portion of their bench near the end . The Spurs were great defensively and shut down Howard in his 6 minutes during the 2nd quarter (1 point and 3 rebounds in that stretch). Tony Parker and Gary Neal combined for 16 points in the second quarter, outscoring the entire Lakers squad. The rest of the Spurs merely had to play good defense and provide one or two shots in order for the Spurs to take a commanding lead into halftime. 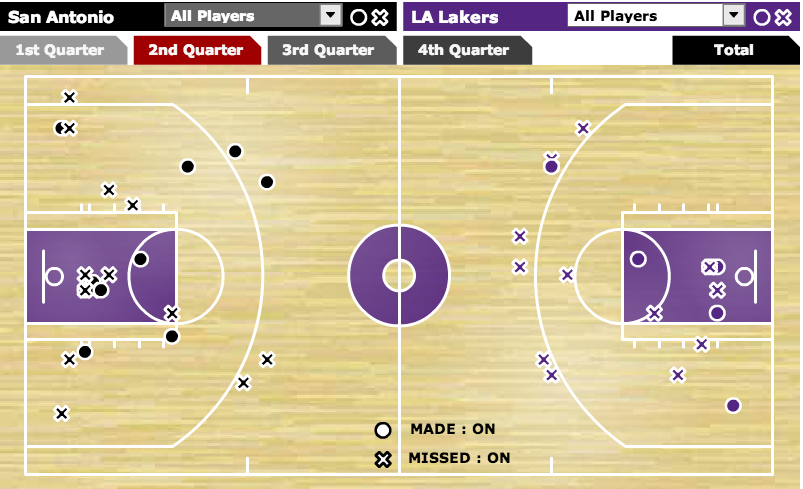 You can see the differences that a player that can drive into the hoop makes for a team. The Spurs had a good portion of their shots in the paint or on the baseline, as Tim and Kawhi shot long jumpers after kick-outs from a drive. There are a couple of makes from the elbows and two from downtown. The Lakers, on the other hand, have some shots down in the paint (Gasol and Dwight) but a bulk of their work is either from beyond the arc (7 shots here, equal to amount in paint) or elsewhere. When the Lakers couldn't get it to their post men, they settled for bad three point attempts (missed 6 of 7) or mid-range looks.

Kawhi Leonard led the team in minutes, at 32. No other Spur even cracked 30 - Tim (29), Tony (24), and Manu (20) all saw optimal minutes in this closeout game. The minute situation worked out well for the Spurs, especially for Tony Parker. Parker was tackled early in the game by Howard as both went supposedly went for a loose ball. Howard pancaked Parker out-of-bounds and it looked like there may have been some malice behind that shot.

26 minutes and 23 points by Tony Parker. Parker was aggressive last night and battled inside among the bigs for points. I liked what I saw and it seems like he'll be back at full strength for the next round.

You can't be ejected for silly reasons if you want a chance to extend the series. Or to be taken seriously. 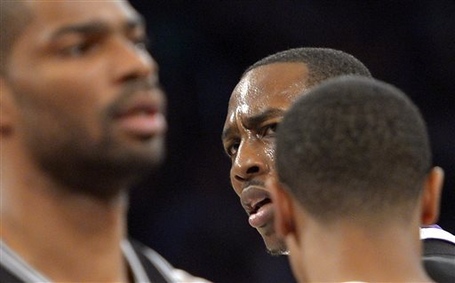 Maybe Kobe didn't want to hang out with Dwight in the locker room.

If the Spurs don't make it past the first round now, T-Mac really is cursed.

Lakers last shot of this season will be a Robert Sacre airball. Fitting.

The Lakers have been swept. Kobe leaving the court on crutches probably deserves some musical accompaniment, yes? sbn.to/13F0OuC 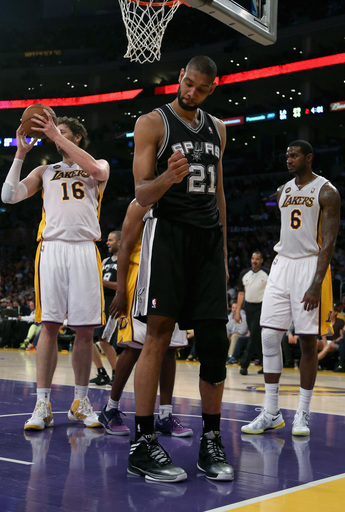 Going into the Next Game, the Spurs Need to...

...get some well-earned rest. The Golden State Warriors or the Denver Nuggets await them in the next round - both of which will provide trouble in the fast break and will test the Spurs' endurance. If Tiago and Boris Diaw should be able to provide some meaningful minutes if both come back healthy. Thankfully, neither of those team's bigs offer much trouble against Duncan, so the Spurs should be fine with their current lineup. Tony will recover from his beating in Game 4 and Manu will continue to let his hamstring get back to 100%.