The San Antonio Spurs continued their strong post-season play last night, scoring more than 25 points in each quarter in a 120 point effort over Los Angeles. Tim Duncan and Tony Parker led the way for the Spurs, each registering over 20 points against an out-matched Lakers squad.

Share All sharing options for: Afternoon Rehash: Domination in LA

Tim Duncan has been a revelation this season. After averaging 13.4 points per game two years ago and 15.4 points just last year, Timmy has managed to both increase his minutes, efficiency, and output to about 18 points and 10 rebounds per game. Credit is due to his diet, his hard work, and overall leadership (read more here and here) and overall mental abilities to know his spots. At now a young 37, Tim Duncan joins a small group of elite players to have ever performed so spectacularly in the twilight of their career. Even though the Big Fun has been the focal pointvof the Spurs franchise for the past decade and a half, role players are a vital element to the team's success. We've seen players like Steve Kerr, Sean Elliott, Bruce Bowen, Avery Johnson, Stephen Jackson, and a rotating wheel of centers placed next to Tim Duncan (since David Robinson retired) come in and immediately contribute in needed areas. Those old role players stepped up when it mattered most and they're just as much a reason as Tim Duncan that championship banners hang in the AT&T Center. Inspired by Cameron Archer's hopefully long-running series The State of the Big Three, let's take a look at the Spurs "Small Three" of Kawhi Leonard, Danny Green, and Tiago Splitter.

After averaging 4 points per game these past two games in San Antonio, Danny Green bounced back with 11 points, 4 rebounds, and 4 assists (one a lob to Duncan). Green added a steal and was a solid +19 in 24 minutes. Of course, he was -14 in the previous game, but that just shows the lack of trust you should invest in a small sample size of +/-. Grade: B+. Games 1 & 2: C.

Kawhi Leonard was decent in Game 1, nearly notching a double-double when he scored 8 and grabbed 11 rebounds. Leonard ramped it up offensively in Game 2, scoring 16 along with 7 rebounds in the second game, helping the Spurs to a more balanced victory. Kawhi has only hit 1 of 6 three-pointers and didn't attempt one in Game 3. His 12 points in 27 minutes last night was solid, along with 4 boards and 2 assists. Grade: B+. Game 1: B+. Game 2: A-.

Tiago Splitter has disappeared offensively, as he's tasked to guard Pau Gasol away from the rim or down low against Dwight Howard. Tiago's either too far away from the hoop to be effective offensively or simply unable to get by Howard. Splitter scored 10 points and grabbed 7 rebounds in about 50 minutes of action but his body of work is the type that is difficult to decipher in the boxscore. Splitter is defending well but he isn't all there on the offensive end. Last night, Tiago was on his way to a better game but eventually left the game with a sprained ankle. Grade: Inconclusive.

"He's really a miracle in my mind."

Pop heaping praise on Tim Duncan. Watch the last bit of the press pass to get to that.

"It's not a challenge to stay focused here in the playoffs."

Might be for some other players. Tim's press pass.

Check out J. Gomez's recap if you haven't already.

To begin, we all know that ESPN and the major networks are underplaying the abilities of the Lakers, (in other words: making some excuses). Sure, their entire backcourt has been hurt to the point that they've reached to their third string for starters (and the D-League!) But even with all of those injuries, they still have two of the best big men in the game (good big men are a rarity in the current NBA, it's a guard's game right now) and a very good and physical small forward (although not 100% back from injury) in Metta World Peace. The Lakers and their fans are disappointed of how the playoffs are going and for good reason. Nothing is set in stone but no other NBA team has ever come out of a 3-0 hole.

Without a backcourt that demands respect, the Spurs are overloading the Lakers' big men, doubling or tripling Dwight Howard in order to frustrate him. The strategy is definitely workeing, as Howard played only 30 minutes but still managed to pick up 5 fouls. Howard got his standard points and rebounds but was visibly upset as the game continued to get more and more out of hand. The 3rd quarter put the game away for good, as the Spurs followed up a strong 11 point halftime lead with a 30-19 quarter. The Lakers had 7 turnovers in the 3rd quarter, 5 of which directly contributed to 10 Spurs points. The Spurs shot 70% in that third frame and would continue their hot shooting in the fourth quarter, scoring 35 to bury the Lakers. It seemed like Pop could have taken out Tony, Tim and/or Manu, but decided to get good conditioning minutes for his veterans. Manu even registered 8 seconds over his 20 minute limit! Tim set the tone early and was on fire. Tony didn't try to do too much and could feel that Duncan wanted the ball, and let him lead the way for San Antonio. Great shooting night for TD and TP.

Just take a look at these shot charts of both teams from the first three games: 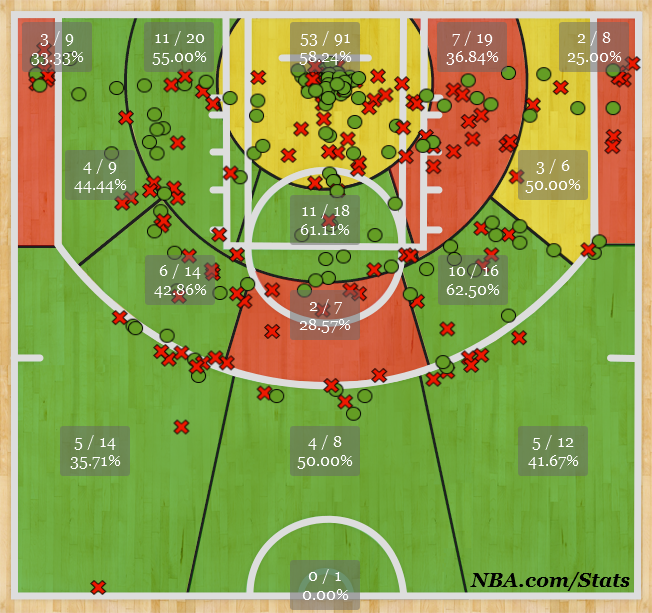 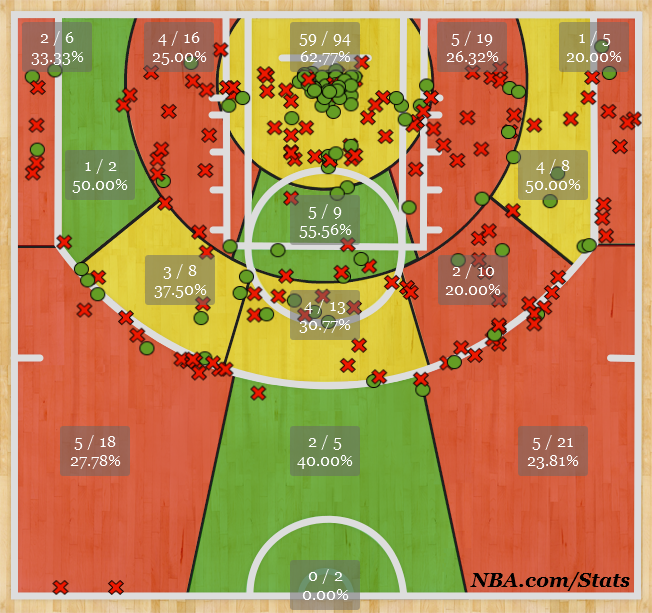 The Spurs have a lot of green on their chart (good) while the Lakers have a lot of red on their chart (also good…well for the Spurs). The two teams have taken very similar shots, but the Spurs have made their threes and have been able to stop the Lakers from making theirs. They've also done well at shutting down their mid-range game and forcing them to do all of their damage down low. Spacing, chemistry and overall running good plays that the Lakers can't defend has allowed for open shots. All the Spurs needed was to start hitting them and they're off to a 30 point win.

37 year old Tim Duncan taking it to the decade younger Dwight Howard, a physical specimen in the NBA. Timmy can't back him down or get by him, but he can outsmart him and outthink him. Fundamentally sound.

Was he hurt again? He played only 17 minutes, missed all 6 of his shots (half of which were from downtown) and had a single assist. He had 2 shot attempts blocked.

Someone in the media room has already given up on this season. I'm blaming @serenawinters. #Lakers mob.li/_a7wIN

Splitter maybe is fine for the second round no matter how long Lakers series lasts. Spurs want to finish it now to get rest for others.

Returning to the Staples Center, the Spurs Need to…

…finish it. They're up 3 games and no team has ever won a series after being down three-nil. This is a long shot for the Lakers but the Spurs would be wise to finish the series on Sunday in order to get some rest for the ill and tired. If they play like they did in Game 3, the Spurs will have no trouble advancing to the next round. But they can't be too cocky and they know that. Nearly every Spur has talked about going up 2-0 against OKC last year and faltering for four games straight. Again, nothing is set in stone but if history has taught us anything, the Lakers won't be able to beat San Antonio this time.