As the playoffs progress, we're monitoring how Timmy, Tony, and Manu are trending and how those trends match up to our expectations and requirements for playoff success. Game 2 provided some very encouraging signs, especially from the Spurs' offensive foundation, Tony Parker.

Share All sharing options for: State of the Spurs: Big Three edition - Game 2

In my first post of this series, I examined the performance of the Big Three in Game 1 of the Western Conference Quarterfinals (Why does nobody ever call it that? It sounds so much more legit than "first round"). If you read it, great. If not, no worries, and I can probably sum up the conclusions in a single sentence. Timmy was solid, Tony was not, and Manu was incredible. I essentially established some preliminary data points to track how the Big Three trend throughout the playoffs so we have some kind of subjective measure for how they are stacking up to what we expect from them. Since both Tim Duncan and Manu Ginobili provided the Spurs with exactly what is required of them during the playoffs while Tony left something to be desired, we'll we examine Game 2, to compare each star’s performance with Game 1, and start to track the emerging trends as the Spurs head to the Staples Center looking to take a three game lead on Friday. Be sure to read Fred’s recap and Aaron's rehash because, as always, both are awesome, and will give you a good idea of how the Big Three, and the rest of the Spurs, performed.

Duncan continued his season long campaign of providing solid, efficient offense while anchoring an effective defensive effort from the Spurs. His statline wasn’t stellar, and I would suggest he had a better Game 1 than Game 2, but he was nonetheless active down low on both offense and defense, and he continues to look healthy and focused.

Here is Timmy’s statline from Game 2:

Again, nothing spectacular. But considering that Duncan spent almost all of his floor time tangled up with Dwight Howard, the strongest big in the league, it was a steady performance characteristic of the rock-solid season we’ve seen so far from the Big Fundamental.

Tracking trends is difficult for Duncan, mostly because defense is his primary role in this series, making his performance somewhat difficult to quantify. I touched on the idea that Duncan has to alter his strategy a bit to handle Howard, essentially making it very difficult for Dwight to establish position. If he accomplishes this, he can try and strip him before he goes up, which places more of an emphasis on steals than blocks as far as quantifiable statistics are concerned. The major concern with guarding Howard is keeping him out of position, which is impossible to quantify.

To track Duncan’s impact, let’s look at the sum of his defensive plays (steals + blocks + defensive rebounds), and also his +/- subtracted from that of Gasol and Howard, his two defensive assignments. I will also track his points and shooting percentage as I will with the other two. 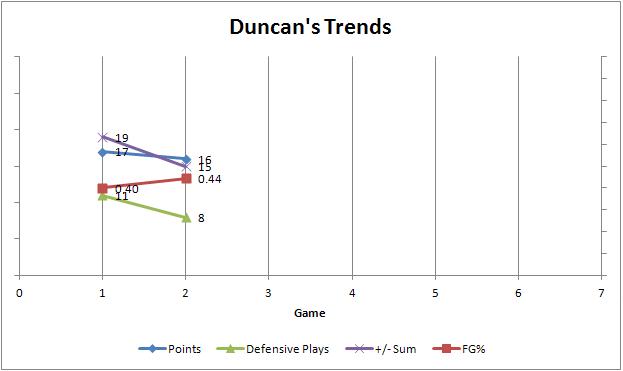 It’s more of the same from the floor captain. Nothing showy so far, befitting his demeanor, yet nevertheless sturdy and effective. Duncan get's a B+ for this one. He wasn’t quite as good in Game 2, but a lot of that can be accounted for by the Lakers’ recommitment to feed Howard down low. He hasn’t exploded for a 30-10-5 game yet, and maybe he never will, but Timmy wants this one badly. He will do all he can to get it.

Tony disappointed in Game 1. Not because he made mistakes, but because we know that we need him to be at the same level he reached in February prior to his injury, and he looked like he was shaking off a considerable amount of rust on Sunday.

If we start believing it’s about flipping switches, we’re going to be gone very quick.

While I agree with the gist of this quote, I saw something happen to Frenchie on Wednesday evening; something that I'd say bore a striking resemblance to a flipped switch. In the first half I lamented that I would have to write about Tony's continuing struggles with efficiency, driving, and scoring. And then it happened. Tony Parker took a shooting foul from Steve Blake at around the 9-minute mark of the third quarter, and from that moment he turned it on. He attacked the rim relentlessly, showing the bursts of speed and finishing skills we hadn't witnessed in weeks. After scoring only 4 points on 6 shots in the first half, Tony dropped 24 points in the second on 14 shots! That's MVP-Tony right there. Heck, that's just straight up MVP-anybody.

Here is Tony’s statline from Game 2:

I think for the Spurs to have a shot at the title, Tony is going to need to consistently score 20ish points per game on at least 50% shooting, all while dishing out at least 6 or 7 assists per game. I would also like to see him get to the line for at least 6 free throws per game as a sign that he is remaining aggressive. 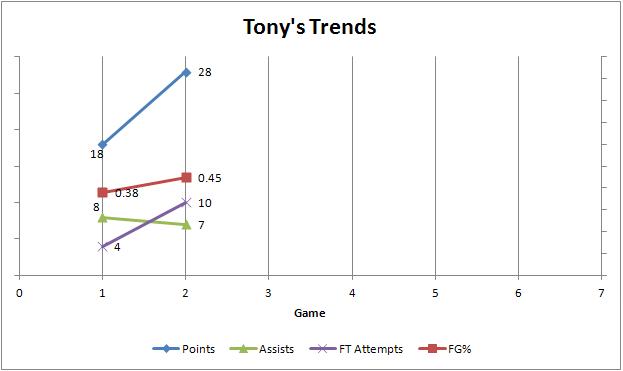 While his shooting percentage hasn’t quite gotten to the desired level for a whole game, everything is trending in the right direction. I give Tony a solid A for this performance. It’s still early, but this performance by Tony provides an encouraging response to the biggest question of the post-season: Can Tony get back to MVP-form? Things are looking up.

Manu was the definitive difference Game 1, and his beautiful game had us all hoping it wasn’t a fluke. Well, rest easy folks, because Game 2 treated us to more of the same from The Chemist, as he concocted another handsome statline in his frustratingly limited minutes. I would only say it in a lumberyard (and yes of course I am typing this from a lumberyard while using my knuckles to tap everything in sight) but it seems Manu is healthy again. Watching Ginobili sky into the air for rebounds, spot up and step back for three pointers (while making them!) and deal some brilliant assists, well it makes me harken back to a time when we couldn’t see his scalp. It’s the playoffs, and Manu is at it again.

Here is Manu’s statline from Game 2:

The only ugly thing about that line is the 19 minutes. Pop is being super cautious, but El Contusión is chomping at the bit. Like Timmy, Manu’s impact is somewhat hard to quantify. He is a Swiss Army knife who gets done whatever is needed of him at that moment in the game. Besides points and FG%, the two things I would like to track for Manu are his 3P% and his turnovers. He has had a bit of a down year in terms of 3P%, but his long distance shooting so far in the playoffs has been phenomenal, and every Manu triple has come at a crucial point in the game. Those instant offensive injections will be pivotal in any potential late-game situations. Manu has always been a bit turnover prone; it’s just a byproduct of the way he plays. If he can commit fewer than 3 TOs per game, I’ll be happy. 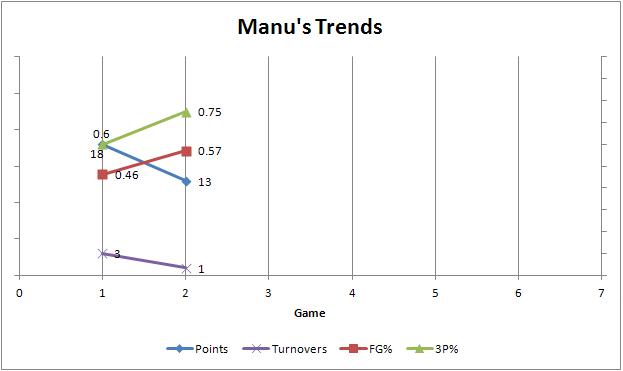 Everything is just peaches and gravy for Manu right now. Another A+ to pin up on the fridge. His efficiency improved dramatically in Game 2 despite a drop off in points, and his 3P% is comically good so far. Here’s hoping that his health remains intact, because Manu looks primed to have a very prominent role this postseason.

So far, so good, but the Spurs are a long way away from the ultimate goal. We will keep an eye on the Big Three as the games continue, and hope that they can continue on their current trajectory. 2 down, 14 to go.