The San Antonio Spurs now hold a 2-0 lead over the Los Angeles Lakers after last night's impressive all-around performance from both the Spurs stars and team role players. San Antonio's front court went punch-for-punch with the Lakers big men but it was Tony Parker who delivered the knockout blow.

Share All sharing options for: Morning Rehash: Stepping Up

Through two games, the Spurs veteran duo has out performed the entire Lakers bench in nearly every column of the stat sheet. Ginobili has 8 more assists and 2 more made three-pointers than the Lakers' bench and is only 3 back in both points and rebounds.

The Lakers bench has been a sore spot for the franchise for much of the past two seasons and, with several key players either missing or limping, will continue to assist in the downfall of the Gold and Purple's chaos-filled 2012-2013 season.

He's a mentally unique individual in that he's able to sustain a year-round workout regiment both physically and in-take wise. He has unbelievable feeling of responsibility for his place in the program and he wants to sustain that performance that he brings night after night. And when doesn't feel like he can, he'll stop. Might be in the middle of the game - He'll walk off the court saying 'I can't hold my weight anymore, I'm done.' He'll walk and I'll be right behind him.

-Popovich on the greatness that is Tim Duncan. 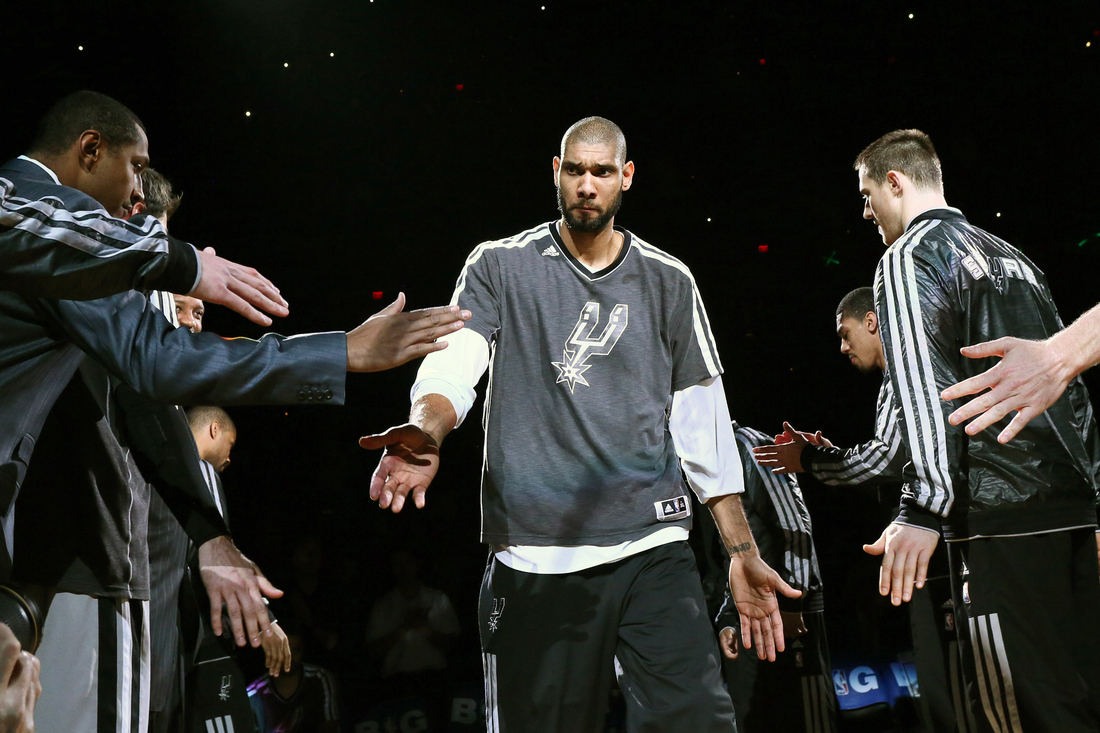 I pin-pointed Dwight Howard's mental deficiencies (see "Game Runt") as the primary factor in murdering the Los Angeles Lakers' chances at stealing Game Two but I would be remiss if I didn't point at handful of Spurs offensive outbursts that kept the mojo on the Spurs' side of things.

First Quarter: A tie game and with roughly two minutes remaining, Manu Ginobili led the Spurs on a 10-3 run to give the Spurs a 28-23 advantage and their biggest lead so far in the game. Manu scored five points on a pull-up mid-range jumper and a jab-step three-pointer. Ginobili was also responsible for the other half of the 10 points with an assist to Leonard into the pain and a beautiful drive-and kick out to Gary Neal beyond the arc.

Second Quarter: Tied again with just under three minutes remaining in the quarter, the San Antonio Spurs made all five of their final shots (including three from deep) to close out the first half on a 13-5 run. This time, the Spurs were led by Matt Bonner's 5 points and a steal that eventually led to a Kawhi Leonard fast break dunk. Once again, the Spurs had their highest lead of the game going into the next quarter.

Third Quarter: San Antonio started the second half strong behind Tony Parker's mid-range shot off a screen from Tim Duncan and Steve Nash turnover that led to Tiago Splitter fast break layup. Parker hit a free throw after Dwight Howard was handed a technical for getting mouthy with an official over a just-received loose ball foul. It was a short 5-0 run but it was the kindling that got Tony Parker's fire roaring in the second half (see "Game Boss").

Fourth Quarter: The first half of the final quarter was a 13-6 San Antonio advantage punctuated with a 7-0 run in roughly a 90 second span. The Lakers committed four turnovers in the 13-6 run and struggled to score (3-8 FG) through the Spurs incredibly active defense. With six minutes remaining in the game, the Spurs held a 17 point advantage.

I originally had Matt Bonner with this title but when you look at the box score for the second half alone, it's easy to see why the award rightly belongs to Tony Parker. After going 1 for 6 from the floor and being forced to produce outside the paint (only one attempt inside) in the first half, Parker exploded for 24 points on 8 of 14 field goals along with 8 trips to free throw line. Tony's aggression in the second half distanced the Spurs from a lingering Lakers squad and essentially displayed how the remainder of this series will play out if Parker keeps building on his confidence.

I could have given this honor to several other Los Angelles players but this was supposed to be a game that Dwight Howard came out and dominate, to make a statement, and turn the tide against San Antonio. Instead, Dwight lost his cool, got into foul trouble, and got out-worked by a three-point specialist who comes off the bench. Everything you need to know about Dwight Howard happened in the middle of the second quarter. Dwight Howard began crowing at everyone around him after he stuffed a pass attempt immediately after blocking a Tony Parker jumper. Thirty seconds later, Howard found himself of Tim Duncan facing up just outside the far elbow. Duncan looked at Howard for a second and then proceeded to sink an easy jumper over the Lakers center. After that, Dwight essentially retreated into the space in-between his ears - 9 points, 7 rebounds, 5 turnovers, and 4 personal fouls (including a technical) in the following 30 minutes after the Tim Duncan stare down. And 3 of those boards came when the game was well over.

Just like last game, you don't even notice when Blair/Bonner is in the game because Manu is suddenly everywhere.

Haven't seen that alley-oop play since Richard Jefferson was here. And this one actually worked! 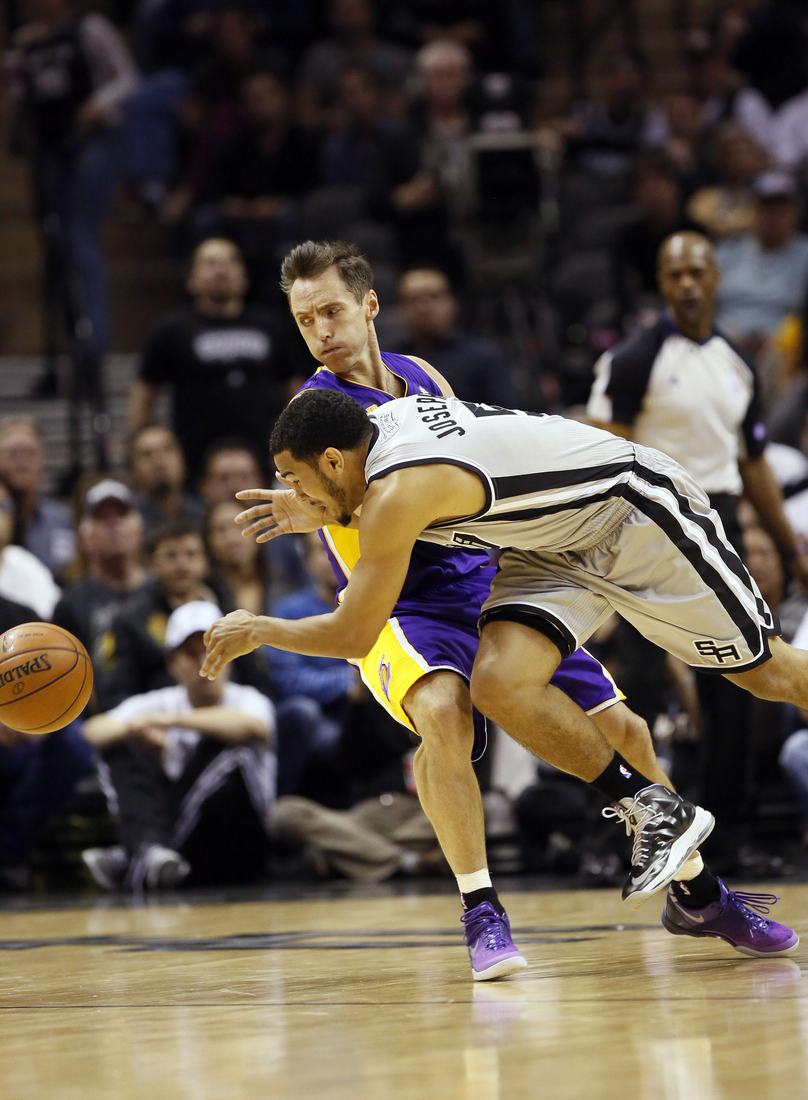 Going into the Staples Center, the Spurs Need to...

...keep their heads screwed on. With a 2-0 lead, the first game in enemy territory is going to be a hard fought battle. Los Angeles showed that they want to get physical and get nasty down in the paint and they have two dangerous big men who are more than capable of dominating a game from start to finish. Steve Nash obviously isn't himself and Steve Blake's status is unknown now so the crux of the game will be unraveled through the front courts of both teams. Tim Duncan, Tiago Splitter, Matt Bonner, and Kawhi Leonard will need to come with same intensity they put out in the first two games of the season.

Side note: It's a guarantee that Kobe Bryant will be out on the floor, crutches and all, trying to will his teammates to a win. And the national broadcast will just eat. It. Up.