It's Fiesta Time in San Antonio, a 10-day extravaganza of food, fashions, parades, all dosed with generous amounts of cerveza and margaritas. The crowd at the AT&T Center was already in a party mood when the game started around 2:30. The roof rose a little when Manu entered the game to loud cheers, and when he sank a corner three 23 seconds after entering the game, the party was on inside the arena. 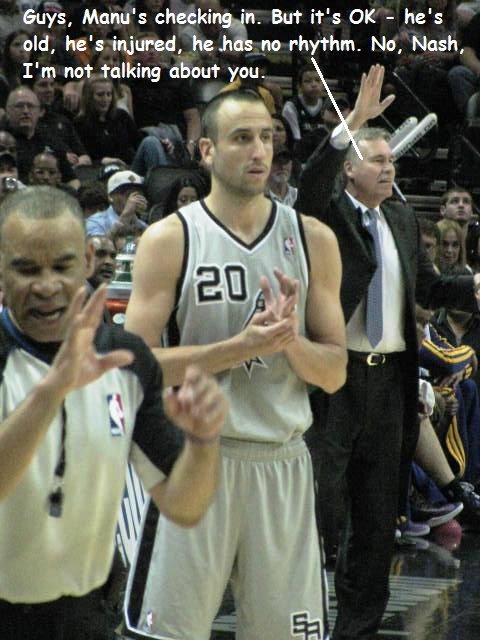 Let me take you on a quick tour of some of the playoff decorations that set the mood outside the arena. Let's begin with the fence outside the media parking lot - a giant GO SPURS GO was created on the fence, not with plastic cups, but with specially designed clips created by some lucky genius who is making some money on a simple invention. 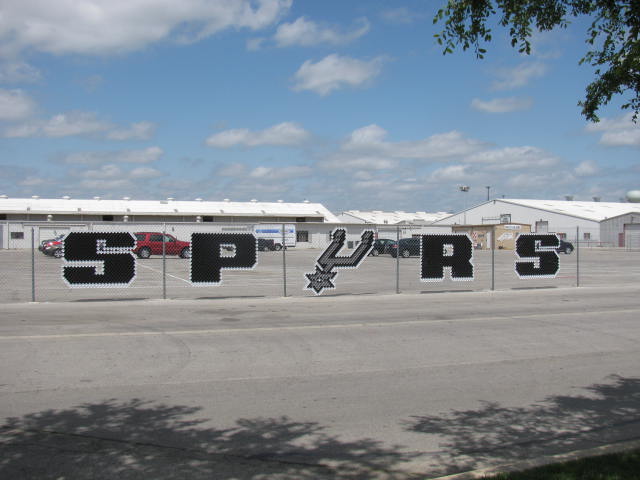 Large murals of players decorated the sides of the main entrance - these were easily 18 feet tall. And they were recently created - Tracy McGrady made it on one, Stephen Jackson did not, 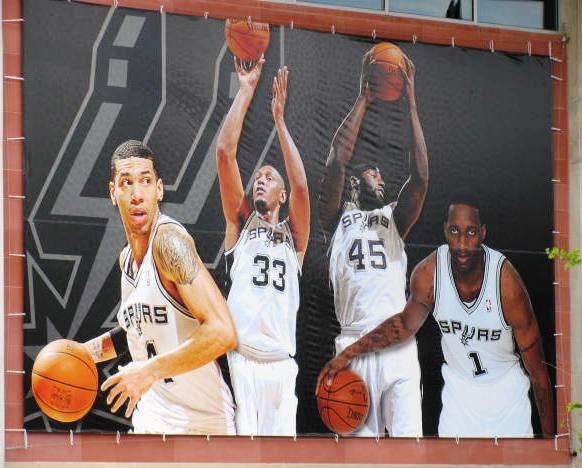 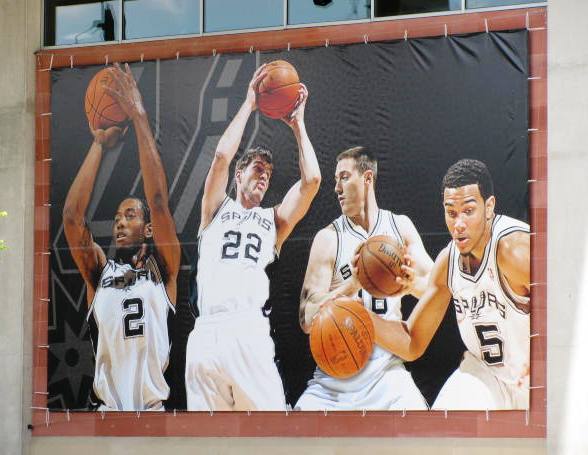 All of the Spurs had some sort of banner. Nando, Gary, Patty, and Matt were displayed on banners draped from the columns in front of the arena. Tim and Manu were featured on long banners flanking the two VIP entrances. But Tony's image was emblazoned on a giant banner that wrapped around the top of the main ticket office. 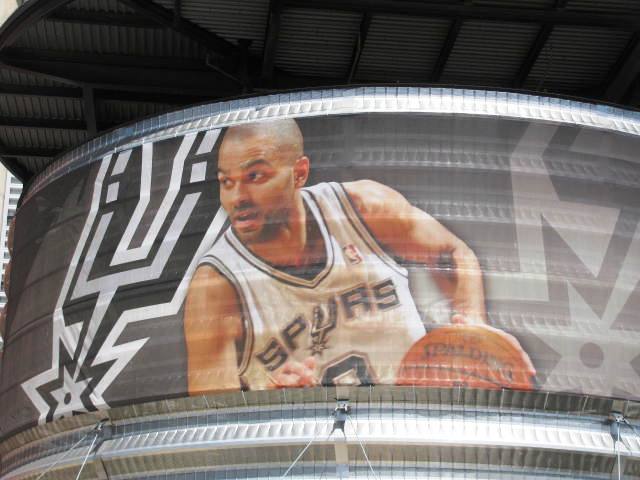 Enough of the outside - let's go into the arena:

Warmups were pretty uneventful. It was quieter at courtside tonight because the autograph area was closed - the Spurs are not signing autographs during the playoffs, just in case you are planning to attend. Aron Baynes came out and laced up his sneakers to warmup for his important role in the game: designated fouler. He would see the court for one second on the clock near the end of the first half as he was sent in to foul Dwight Howard. 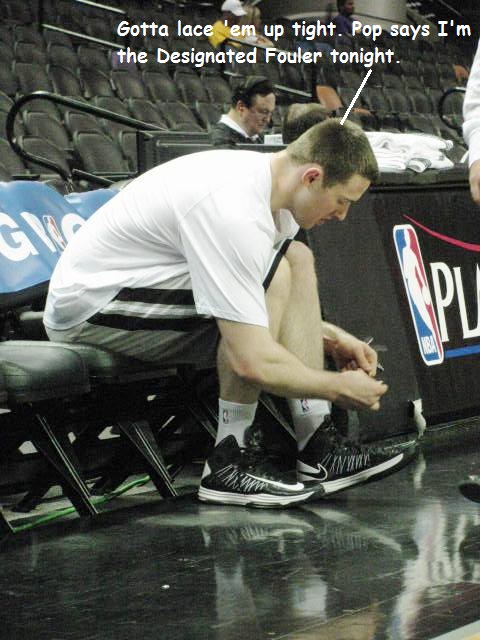 Aaron Preine has already written about my cheering as Tiago sank a trio of three-pointers in a row at the end of his warmup. I can't remember ever seeing him make one. Ime Udoka, who was working with Tiago, found it so amusing that I was cheering that he called it to Tiago's attention - a good laugh for us all. Will Tiago try the move in a game? 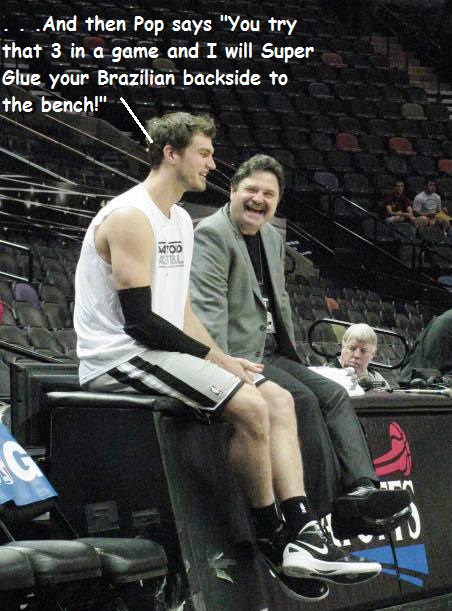 A trim and fit DeJuan Blair during warmups: 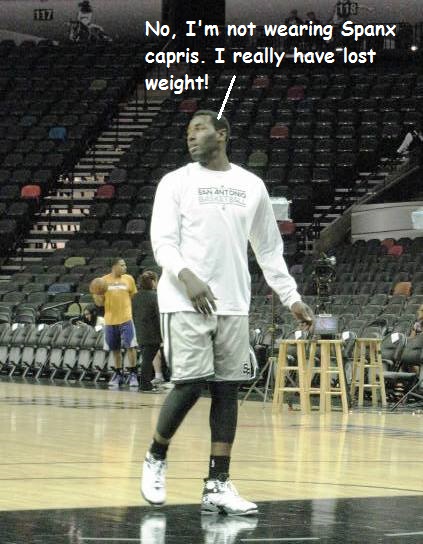 While the referee and other players waited at midcourt for the opening tip, Dwight Howard walked to the baseline area and did a stretch: 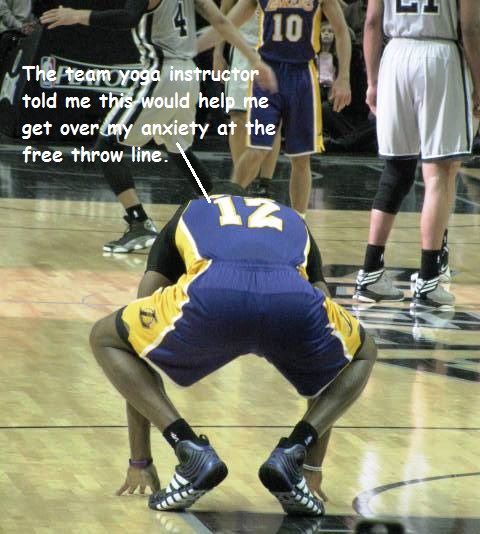 Near the end of the first half, Tony passed the ball to Manu on a fast break. Manu was fouled on the shot (which went in) and fell out of bounds. As the crowd held its collective breath, Manu got up and worked his way through the vanquished Laker defense to shoot his free throw. 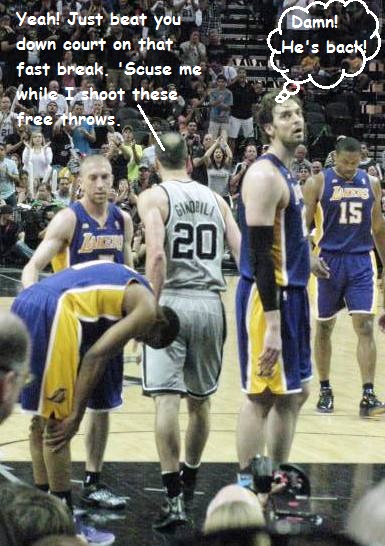 Manu was only getting started - the 10 points in 85 seconds at the end of the thrid quarter are the stuff of legends. 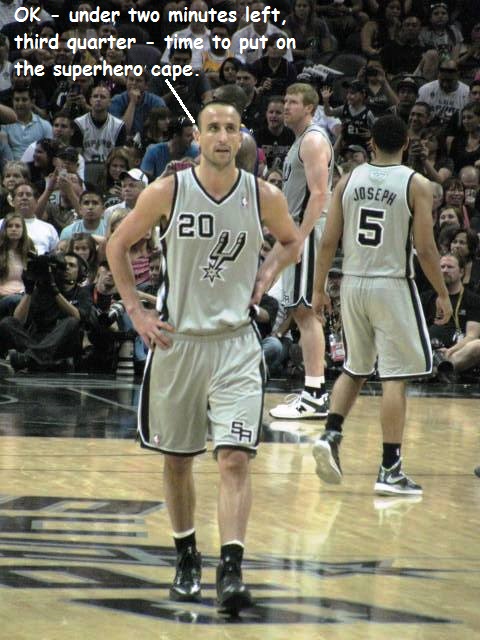 David Aldridge was in attendance - I asked him before the game if he was happy - but he did not do the between-the-quarters interview with Pop. Pop appeared to actually be somewhat pleasant. 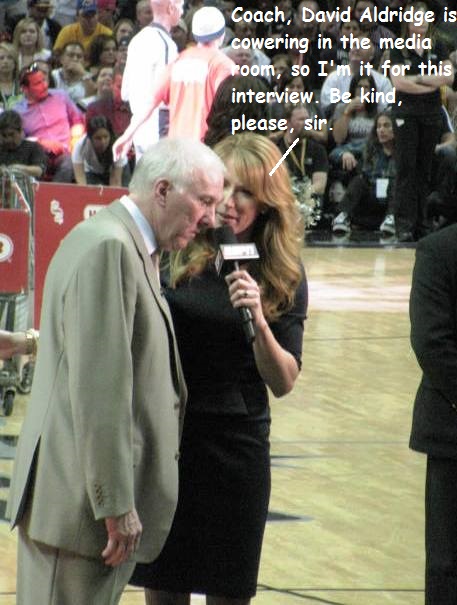 The story of the game, at least as far as the Lakers were concerned, was Coach Kobe critiquing the game via his twitter account: 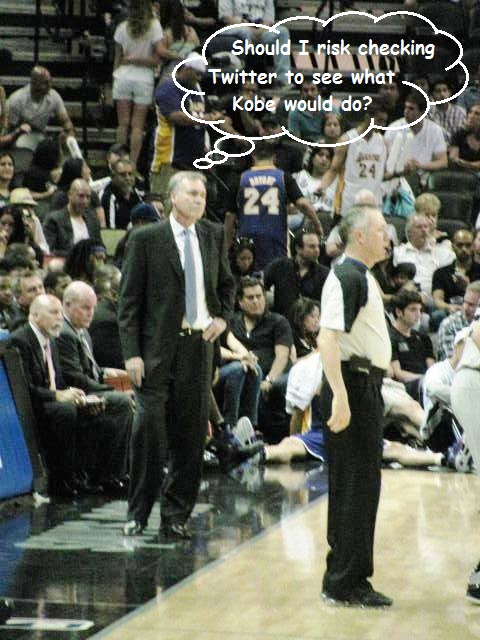