Spurs should focus on transition offense

During the regular season, the Lakers were infamous for their poor transition defense. That characteristic of deficiency has leaked into the playoffs. Last night, the Spurs took advantage of several fast break opportunities, scoring enough points in transition to tilt the game in their favor.

Share All sharing options for: Spurs should focus on transition offense

The Spurs are not known for lighting up the scoreboard via transition points. They aren’t the Clippers or Nuggets. And when a certain Tarheel handles the fast break, the result could more appropriately be called "Slob City," because it can get pretty messy. If through the regular season, transition buckets were somehow magically awarded no points, the Spurs margin of victory would have been 0.4 points better and they would have won 1 more game. That’s not ultra-significant but it confirms that, even in a year where the Spurs rank 6th in pace, they do not win games by pushing the ball up the court in transition. Indeed, the Spurs are 19th in the league in points per possession (PPP) for transition plays.

However, in Sunday's game against the Lakers the Spurs scored 17 fast break points. The Lakers scored just 2. Let me just pull out my abacus so I can calculate ... ok. If I slid the beads correctly, it should come out to +15. The Spurs outscored the Lakers by 15 points in the fast break! This is very un-Spurs-like. In 82 regular season games this year, the Spurs only outscored their opponents in transition 34 times. What’s more, in last night’s game, the margin in the fast break decided the game. On a poor shooting night for both teams, where each team shot nearly the same number of free throws, the 15 point margin in fast break points gave the Spurs the edge in a 12 point victory. This feat is even rarer for the Spurs, and before last night, it had only happened 6 times this season.

Interestingly enough, 2 of those 6 times came against the Lakers. You see, while the Spurs are not a fast break oriented offense, the Lakers are not a fast break oriented defense. The Lakers are just downright Sir-Chuck-turrble in transition D. Now, it could be fair to say the Lakers offensive deficiencies led to last night’s transition breakdown. Fast break points often follow steals or missed three pointers, when the ball often careens wildly off of the rim. It is understandable when a team allows transition plays off of these sometimes uncontrollable mishaps. So perhaps last night’s transition debacle for the Lakers could be attributed to the high number of turnovers (18), or a very poor three point shooting night (3-20), but the fact of the matter is that is not the case. Last night, the Spurs attempted 15 plays in transition. Only five of those resulted from Lakers turnovers, and only two from missed threes. What’s more, the Spurs only converted on two of these seven plays for 4 points. That means the Spurs were able to convert eight transition plays following typical missed shots from mid-range or the post into 13 points. Again, they won by 12. This vividly highlights the defensive deficiencies in the Laker’s team. The Spurs missed more shots than the Lakers, yet the Lakers only attempted 3 transition plays. Either the Lakers are not designed to defend transition, or their players choose not to.

Whose fault is it?

Simply put, The Lakers find it difficult to recover defensively following missed shots. Even without Kobe Bryant, who is less of a defensive liability tweeting from his sofa than when he is on the court, they often find themselves confused, discombobulated, or disinterested when dropping back, whether the ball was stolen or they just missed.

Pau Gasol is especially guilty. Look at this play, where Gasol tried to feed Metta World Peace inside but made a bad pass. World Peace was forced to dive for the loose ball, and swatted it right to Tony Parker. 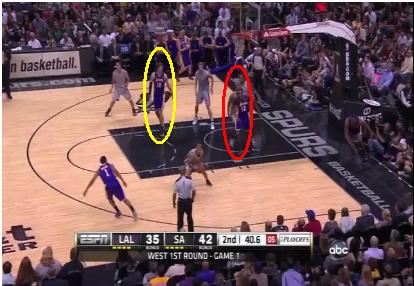 In this screen shot, Parker has just recovered World Peace’s attempted save. Notice where Pau Gasol is, circled in yellow. Aside from Darius Morris, he is the only other Laker who really has a shot at stopping a fast break here. Now notice where Tim Duncan is, circled in red, right behind Dwight Howard. At this point, Timmy is about 10 feet behind Gasol. 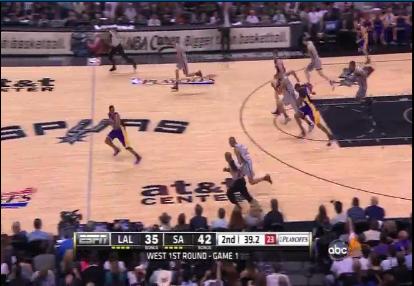 As Tony and Manu run the two man fast break, Timmy sprints, all out, to catch up. He catches Gasol AT THE TOP OF THE KEY. The top of the key is 21 feet away from the backboard. Tim Duncan manages to cover that distance in the same time it takes for Gasol to cover half. Two things are obvious here: Timmy desperately wants to win, and Pau either doesn't care or is still hobbled by plantar fasciitis. Fast forward a bit, and we see that Tim Duncan is within 10 feet of Manu as Ginobili attempts a layup, which he would convert-and-1 for a three point play. 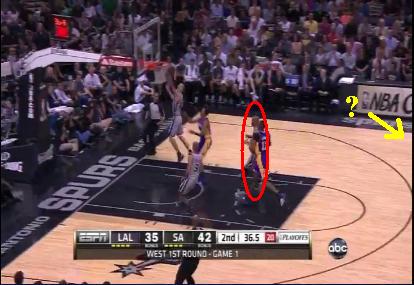 Gasol is nowhere to be found. If Gasol had sprinted with the same tenacity as Duncan, he would have been right on top of Ginobili with a chance to deter or block an attempt. Instead, he doesn’t even make it to the three point line. 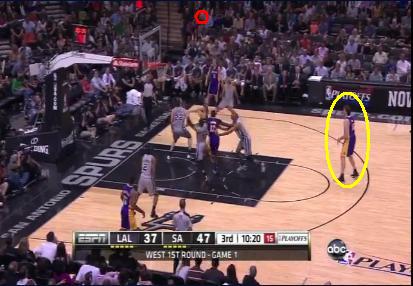 At this point, Splitter just rejected Nash, and the ball, circled in red, is in the air. Every Laker but Gasol is near the baseline, and since Gasol has decided not to make a play on the loose ball, he should start to drift back to prevent a fast break. 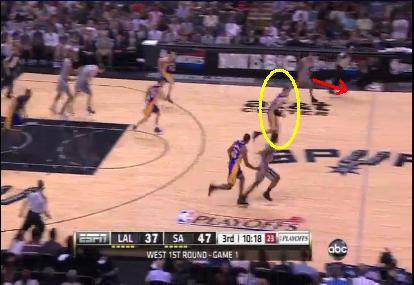 Instead he stays put, and by the time Splitter pulls down the ball and makes the outlet pass, Tony Parker has already passed him. Metta World Peace makes a valiant attempt to foil the play, closely shadowing Kawhi Leonard to prevent any chance of a "KaWOW" moment. Parker hesitates a bit, looking to find Kawhi, but seeing that Gasol is making little effort to recover, he turns on the jets to and finishes around World Peace. 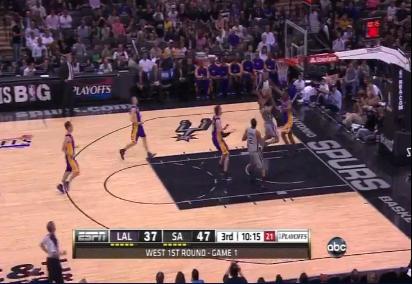 If Gasol had made even a remote effort to drop back, he could have at least sealed Kawhi to free World Peace to fully commit to Parker. Instead, World Peace has to make a last minute switch and can’t get into position for the block. Tony makes a nice move under the rim and lays it in. Even if World Peace had made a better contest, Tony could have dropped it off to Kawhi for an easy lay in.

Fred called Game 1 a systematic beatdown. The Lakers transition defense could be defined similarly. Even when the Lakers do manage to drop enough guys to prevent a dunk or a layup, they routinely leave guys open on the perimeter because they don’t commit to a man. Let's look at an example of this systematic breakdown. 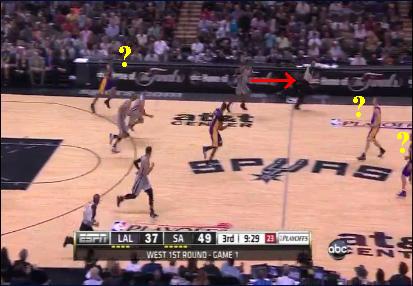 On this play, following a missed triple by World Peace, Blake and Nash are in position to contest perimeter shots from either side of the floor, and Howard is dropping back to defend the paint. World Peace lollygags a bit, allowing Kawhi Leonard to sprint ahead into the corner. 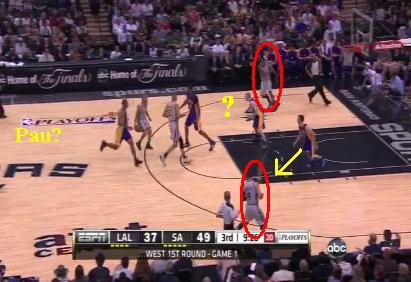 Green positions himself on the opposite side of the arc, and Nash is forced to close out to defend him. Blake can’t decide whether to wait for Parker in the lane or close out on Leonard. He chooses the former, drifts too far into the paint, and leaves Kawhi wide open for a triple (he missed, unfortunately). Once again, Gasol is nowhere to be found. Kawhi's miss was one of several lost scoring opportunities in transition for the Spurs, as it was generally a night of poor shooting from everyone. Should the Spurs start making their open looks, these games could get quickly out of hand.

The Lakers transition defense is symptomatic of a poor system, weak communication, and pitiable effort. Their offensive sets often send four guys to the baseline, and they generally try to collect offensive rebounds if possible. Unlike the Spurs, who chose their spots based not only on the positioning of the shooter, but also on the positioning of each player to become a potential fast break defender, the Lakers find themselves reeling on misses simply because they set their offense so deep into the frontcourt. As a result, they often find themselves scurrying to drop back, and when you combine a scrambled recovery with a lack of desire (or failing health) and missed rotations, you generally end up getting scored on, even by a relatively mediocre transition team like the Spurs. As such, I'd like to see the Spurs make a commitment in this series to really push for transition offense. It may not be season-long strength of this team, but it can be a potent weapon to break these Los Angeles Lakers.

If we win the first game, Lakers will fold like a Walmart yard chair because they reached their goal of making the playoffs and we are just beginning our quest

IC made this comment on Edg5’s series preview, and I think it is spot on. When a team is in a close playoff game, yet still fails to hustle back on defense, it shows that they are either uninterested in winning, or can already hear the death knell. Without Bryant to provide (non-internet-transmitted) motivation, the Lakers don’t appear to have the emotional desire to win this series, much less make a deep playoff run. Meanwhile, Tim Duncan has his sights set on a fifth championship. He has motivated himself through no other desire but to see his team win another Larry O’Brien trophy.

The Lakers, especially with Kobe, have always played for rings. LeBron plays for rings, Phil Jackson coached for rings, Mark Cuban trades his players for rings. But the Spurs play for trophies. Rings are worn by individuals. Trophies are shared. And because the Spurs are accountable to each other, and each individual truly wants what is best for the entire organization, they work tirelessly on and off the court so that, at the end of season, they have a chance to share that golden prize.