The San Antonio Spurs started the 2012-13 playoffs on a good note last night by thoroughly beating the visiting Los Angeles Lakers, 91-79. Despite a rough shooting night, the Spurs looked efficient on both ends of the floor for the first time in weeks. With the Lakers suffering through both injuries and distractions, things are looking smooth for San Antonio.

Despite all of the struggles the San Antonio Spurs have suffered through the past month or so, the idea that the Los Angeles Lakers could (or can) "easily upset" the second Western Conference seed is laughable. Yes, several key players on the Spurs roster have had ongoing love affairs with the injury report. Yes, the Spurs offense has been a bit Charlotte-esque since mid-March. And, yes, the defense has statistically bottomed out in several areas (perimeter and rebounding). But the Lakers just walking over the Spurs to the second round? Not happening.

Aside from the fact that the Spurs are led by a trio of well-rested star players who statistically crank it up once game number eighty-two is in the rear-view mirror, the Lakers are one of the biggest train wrecks ever to grace the post-season. Los Angeles squeaked into the playoffs thanks to their slightly above-average play being enough to catch up to the Utah Jazz, a team whose backside had completely fallen off during the last two months of the season. In the regular season, the Lakers were 20-27 against teams above .500. To even consistently win games post-All-Star weekend, Los Angeles needed a Herculean effort from a one-man offense to get them over their defensive short-comings. The Lakers defense finished 22nd in points allowed, 14th in both opponent field goal percentage and opponent three-point percentage, and 29th in opponent turnovers.

Injuries and team chemistry have both been issues the entire season for Los Angeles. Dwight Howard started the season still recovering from back surgery and later suffered a torn labrum in his right shoulder. Steve Nash, the ancient one, has been in and out of the injury listing all year. Kobe Bryant was slowly coming apart at the seams before his Achilles tendon finally tapped out during the final days of the season. But even when healthy, the lineup was never built for a Mike D'Antoni system of seven-seconds-or-less offense and a defense that would embarrass a Pop Warner basketball coach. D'Antonio couldn't apply his offense nor abandon his defensive deficiencies.

Of course, there are the notable internal power struggles between Head coach Mike D'Antoni and Kobe Bryant, D'Antoni and Pau Gasol, D'Antoni and Dwight Howard, Kobe and Howard, Kobe and Gasol, Kobe and the towel boy, Kobe and his personal masseuse. And so on and so on. And let's not forget the obvious in-season flirtations between Phil Jackson and Kobe. Even the unfortunate passing of Jerry Buss, which many in the national media propped up as a Lakers' rallying cry, wasn't enough to cease the squabbling and embolden the franchise.

The post-season is generally treated as a clean slate by teams, or rather the "start of the real season." Drama, excuses, and finger-pointing have no place in the playoffs. But the Lakers, baggage still in hand, now have the added burden of the twitter-fiasco from last night. I'd say "good luck" but I wouldn't mean it in any shape or form.

I don't really know. We're going really slow. We wanted another body just as an insurance policy. We don't know what's going to happen during the playoff series and we wanted to add someone. With Tracy, he's a pro. He knows how to play, he's a great passer, and he has a really high basketball IQ. It's just a matter of getting him in shape and, if a situation arises where we want to look to him, he'll be ready.

-Popovich on the progress of Tracy McGrady. 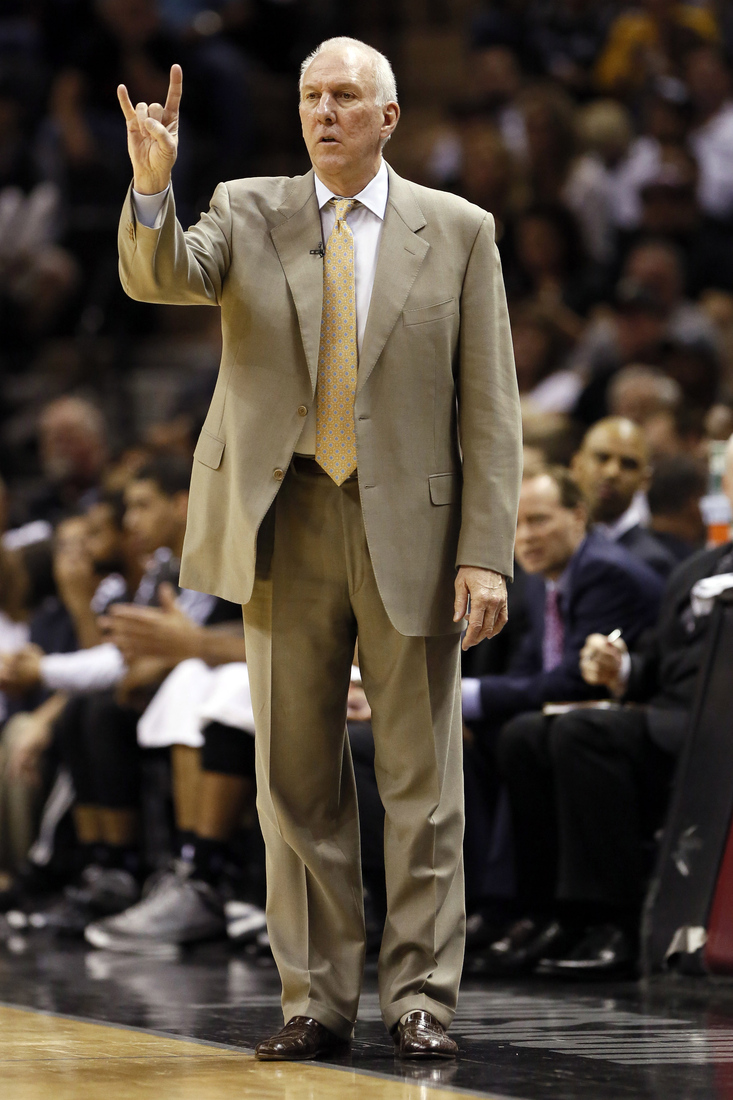 Pop heard Alice in Chains is going to be in town on May 26th. - Soobum Im-USA TODAY Sports

The Spurs shot 33.3% in the third quarter last night (6-18 FG) but it was one of their better quarters in the past month. San Antonio tried to come out aggressively behind Tony Parker but their offensive output came to a screeching halt after the first two minutes. The Spurs went 4:40 without a single basket and with only 1 point from the charity stripe but their defense managed to keep the Lakers from drastically closing the gap within that stretch (3-8 FG). San Antonio was moving the ball effectively but just simply couldn't connect on the wide open looks.

After a Tony Parker pull-up jumper following a Spurs timeout, San Antonio went another 5:07 without a basket. Again, San Antonio's defense paired with excellent ball movement and aggressiveness kept things from going south. The Spurs kept pounding the rock with their offensive scheme, and it paid off, as the Spurs put themselves at the free throw line 10 times in the second half of the quarter (shot 11 of 12 in the quarter).

Los Angeles scored only 5 points in the final 2:47, with each one being "earned" at the charity stripe. The Lakers went 0 of 4 from the floor within that stretch and only 7 of 19 overall in the third. After going for 14 points in the first half, the Spurs focused their attention on getting the ball out of Dwight Howard's hands, sending help off of the perimeter. Howard wasn't able to get even one attempt up, but as a result of the "give and take," the Lakers were given several opportunities from deep. Even though their two best perimeter shooters took half of the looks, Los Angeles only managed a 1 for 6 effort. Each team turned it over three times in the quarter, however, only San Antonio was able to convert those opportunities into points (4-0).

I thought tonight was the best defense we've played in three or four weeks. It came at a good time.

When the third quarter was all said and done, the Spurs managed to increase their halftime lead by five points - thanks to their dogged defense, dedication to the game plan, and an 8 point explosion in the final 90 seconds by last night's Game Boss (next section).

Manu Ginobili's energy and shot-creation completely rejuvenated a flat-lining Spurs offense. Manu's brightest moment came in the final 90 seconds of the third quarter, when he scored 8 points on 3 of 4 field goals. As Fred Silva said in last night's recap, Ginobili sensed the "Spurs' momentary vulnerability" and seized the game by its throat. Ginobili took on Pau Gasol one-on-one, driving right at the Lakers' forward for an easy layup. He followed it up with a pull-up three-pointer and then caught a fast-break pass from Joseph for another deep ball to finish the quarter.

It was great to have Manu back. He makes big shots, he creates problems for the opponent, and he's got a great will - a great desire. I'll worry all night about how he'll feel in the morning. If he says he feels great, that will be a good sign for our team.

-Coach Popovich on Manu's impact on the team.

Antawn was a void on both ends of the floor, starting it all off by drawing two quick fouls in his late first quarter appearance. Jamison was aggressively beat out on rebounds by smaller Spurs players and was victim on several San Antonio fast breaks. Cory Joseph was even matched up on Jamison for a long stretch and, outside of a few poor foul calls, the Lakers' forward couldn't capitalize on the mismatch. 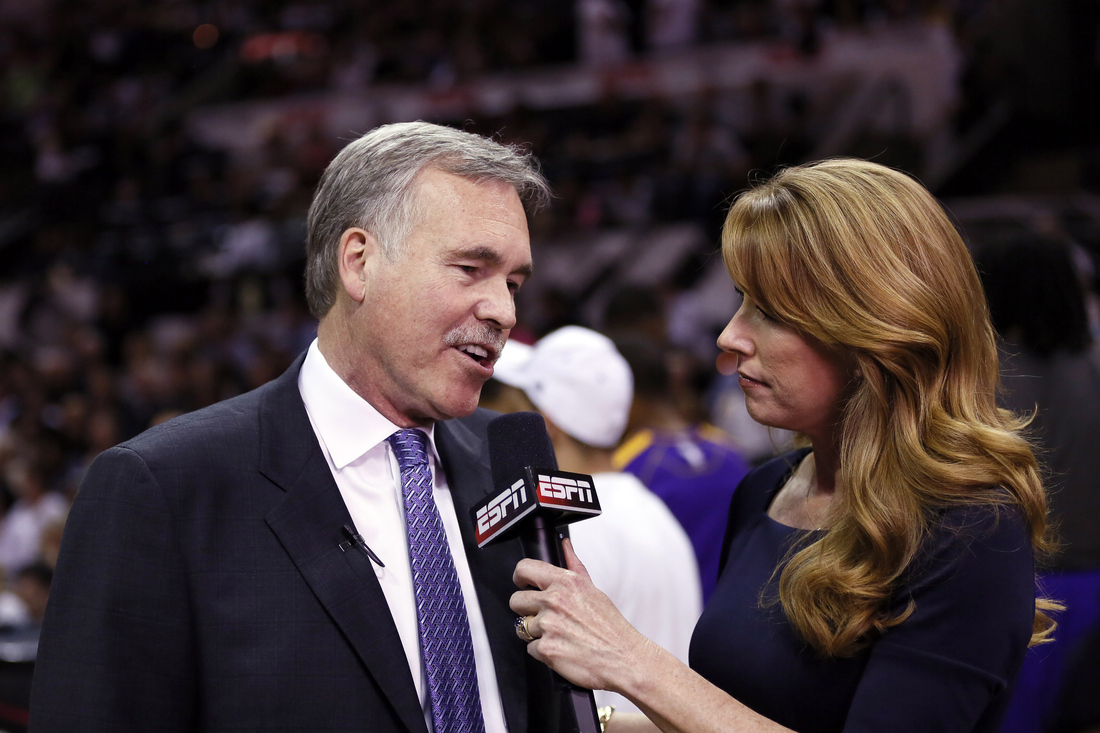 "Well, I have no clue what I'm doing either, Heather." - Soobum Im-USA TODAY Sports

Manu's numbers off the bench mean less than this: The ball moves better on the 2nd unit when he's on it. Trainwreck without him.

The Spurs should have a special guest fouler against LA. Just pick someone out of the crowd, put 'em in a jersey, 6 free hugs with Dwight.

Hey @kobebryant, some of us think your defensive advice against the Spurs is amusing considering.. twitter.com/KGTrashTalk/st…

Ginobili is a straight up beast

Manu doesn't jump when he rebounds, he falls out of the sky from heaven.

Going into the Playoffs, the Spurs Need to...

...do more of the same but, you know, hitting more of the open baskets would be a nice addition. Though not at the same frequency as the Spurs, the Lakers missed some wide open looks as well. Los Angeles has a handful of intelligent passers on the roster, so the Spurs will need to stay on top of their quick rotations when they send help into the paint. The last thing the Spurs need is the Lakers' sub-37% three-point shooters, which is everyone outside of Nash and Blake, to get hot off clean looks. The Spurs can't afford to pull their defensive focus off Howard and Gasol.