The Fallacy of Review

In the last decade, the NBA has instituted a number of replay-based reviews both during games and after their completion. The intention of these review policies is to provide accuracy when calling the games to ensure unbiased mediation from the referees. As a result, gameplay has been considerably influenced by review decisions. How has the institution of replay affected the NBA and how we perceive its officials?

Share All sharing options for: The Fallacy of Review

In Game 4 of the 2002 Western Conference semifinals, Los Angeles Lakers forward Samaki Walker hit a near half court shot just prior to halftime, and the Lakers were awarded three points. Close inspection of the TV replay however showed that Walker did not release the ball prior to the sound of the buzzer. The Lakers won by 1 point. Subsequently, the NBA instituted an in-game instant replay policy prior to the 2002-2003 season to verify calls during buzzer beater situations. By this initial measure, NBA officials were required to confirm that end-of-period made shots and personal fouls actually occurred before the horn.

In the past 10 years, the league has gone on to add 11 more in-game instant-replay measures to assess situations such as flagrant fouls, fights, and goaltending. Additionally, they have recently instituted post-game review situations like the new anti-flopping measure.

If you've listened to Jeff van Gundy call a game for ESPN this season, you have no doubt witnessed one of his streaming diatribes on how in-game replay disrupts game flow. Based on what I have heard, van Gundy has had it, and would prefer there were no play-halting reviews. I understand this sentiment, both from a momentum standpoint and a business standpoint. The casual fan is losing interest in the game while the officials zoom-and-enhance the video replay to determine if that actually was a clear-path foul. While I realize that these measures have a well-intended purpose, I wonder if they have created more problems than they have solved. Do they really reduce bias, or do they instead introduce bias? Is the NBA using them to promote fair play, or to cover its own rear? I feel that it is a bit of both.

I am particularly troubled by the "last-two-minute" flavor of in-game reviews, which include out-of-bounds calls, charges in the restricted area, and shot clock resets. In a tight game with a pivotal call on the line, we certainly want the referees to make the correct decision. But what if the correct decision... well... isn't? Let's say two players are jockeying for a rebound late in the game, like Kevin Garnett and Pau Gasol in Game 2 of the 2010 NBA Finals:

There are several issues with this review. To begin with, only because the call was made at the 1:59 mark could it be reviewed. If he had occurred just two seconds prior; sorry. Tough luck. Additionally, it seems pretty clear (to me and the commentators) that Garnett last touched the ball. But was it inconclusive? Guess not, Celtics ball.

My biggest beef with this call, and so many others like it, is that the referees are able to review the call without consideration of a foul. While I'm not sure if a foul occurred here (Garnett may have been over the back of Gasol), what if there had been a clear foul? I can't find the video, but in Game 3 a similar situation occurred where Lamar Odom knocked the ball out, but was very clearly fouled by Rajon Rondo. Below, you can see Rondo's left hand grabbing Odom's right forearm as Lamar tips the ball out of play with his left hand: 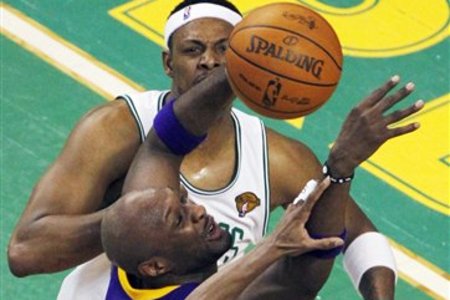 The referees have been placed in an impossible situation here. The ball may have gone off of Odom, but he is clearly fouled. When they review the play, they are unable to make the foul call. Celtics ball. End of story. The issue is that, in a similar situation which cannot be reviewed, the refs will almost invariably award the ball to the player who was fouled, regardless of who last touched it. The NBA has decided that reviews can only focus on the situations for which they are initially intended. So a foul cannot be called on an out-of-bounds review. However, a foul can be called during review of a charge when it is unclear whether the player was in the restricted area.

This NBA has created a double standard here. The league supposedly wants to absolve referees of blame for making the wrong call in a crucial situation, but it makes it impossible for them to make the right call. It's not fair to the players, the fans, or the referees. We have effectively plucked officials from the frying pan, having to make a difficult call in real time, and thrown them into the fire, with no chance to make the right call.

The exact plays described above were critiqued by other SB Nation writers here and here, and the discussion of the issues with in-game replay especially in the situations like the ones above are not unique to this article. Even in the last year, writers from Clips Nation (link) and Silver Screen And Roll (link) have made mention of these plays and others just like it. All of these writers acknowledge that the currently infirmed state of replay review in NBA succeeds in some situations but fails in others. They also acknowledge that true solutions are fleeting. The truth of the matter is that we have a situation which is symptomatic of the brokenness of the NBA front office as the governing body of the league and its employees.

The other situation which irks me is the post-game league reviews. The new flopping measure does appear to have reduced the incidences of flops to the detriment of certain players. Maybe we explain some of Manu's decline to the fact that he is trying to draw fouls, but hasn't. Maybe the referees have become more keenly attuned to flops during the game, and thus notorious floppers are having trouble getting calls. This is difficult for me to admit, considering the Spurs' recent games against James 'Chin Thrust' Harden and Chris 'Chris Paul' Paul, but I believe it to be true. So if the referees have become hardened even to some Oscar-worthy, tear-jerking flops, why do we need a post game review? The flop rule is essentially a communication from the league front office to the officials saying, "We don't trust you to recognize a true foul."

In addition to the flop rule, several times this season the NBA has "apologized" to teams when referees have blown calls in pivotal late game situations. The most recent was Kobe Bryant's (and Dwight Howard's) clear foul on Ricky Rubio during a potential game-tying last-second three pointer:

This is not a reviewable situation, and the referees unfortunately got it wrong. As the announcers and Kobe pointed out, the referees will not make that call.

Question: What happens when the NBA "apologizes" to a team? Answer: Absolutely nothing. Nobody's record changes. Nobody is fined. Nobody gets so much as a bouquet of "I'm sorry I screwed up" flowers. The NBA apologized, so now it doesn't have to sleep on the couch, but it has once again sent its officials to the dog house. It's like when you got in that car accident because you swerved to miss the Mack truck who was changing lanes when you were in his blind spot. The truck driver sure was sorry but at least his insurance premium didn't go up. The NBA, in an air of manipulation becoming all too common, uses tender words to console the fans, players, and coaches. Really, the league front office is just using the apology as a rampart between itself and its front-line employees.

Unfortunately for the NBA and its reputation, they didn't really have a choice. The first two replay measures followed the 2002 playoffs, but the last 11 have come between 2007 and 2013, in the wake of the Tim Donaghy betting scandal. It cannot be said enough how much this (hopefully) isolated incident has affected the way games are officiated, and the NBA has its hands tied. The primary consequence of the betting scandal and subsequent allegations of officiating bias was that we could no longer trust the officials and the league that hired them. Unfortunately, the blaming and fingerpointing has devolved to the point where now the NBA front office has gotten in on it. In an attempt to distance itself from Donaghy's miscues, the league has disenfranchised the very people it should seek to empower.

Is that fair to the NBA? Maybe, but probably not. The allegations were never confirmed, and while conspiracy theories abound, you just can't invent evidence to the contrary. Even if the allegations are true, to this point the glove still doesn't fit. Regardless, the NBA certainly felt some responsibility for its lack of oversight in the situation, so the front office instituted measures to check the actions of its officials. Is this fair to most of the league's current referees? Absolutely not. Why should these men have to inherit Donaghy's blame? The situation is most surely controversial, but we have got to move forward.

There may be a solution to this mess, but the current installment seems to treat the symptoms and not the cause. The league's integrity took a shotgun wound to the chest with the Donaghy scandal, and the current instant-replay review measures are just like gauze. They may stop the bleeding, but they can't stop the triggerman.

I am not advocating for a dismissal of instant replay review. Maybe it needs to be tweaked, maybe it doesn't, and I'm not even sure if tweaking it won't just make it worse. In my eyes, however, the only remedy to this state of infirmity is to return to a state of trust. Aside from a few bad eggs, the NBA hires the best referees in the world. The guys make very difficult calls on a play-to-play basis, and they generally do a tremendous job at making them. Fans, commentators, and now the league, have the benefit of full-game instant replay to scrutinize and judge every play at a fraction of the real-time speed. Do the refs miss calls? Yes? Are they inconsistent? Occasionally. But they are the best we've got. The NBA isn't going to suddenly find a goldmine of replacement refs, and you obviously know how that scenario played out for the league with the funny-shaped ball.

Instant replay has transformed the referees into metaphorical ants, held under a scorching magnifying glass. It is a tough situation, and eventually someone is going to make the wrong call, and get burned. Can we stop the fingerpointing and the blame? Can we stop incessantly searching for the scapegoat in our team's close losses? Can the league improve oversight measures to ensure the referees are trustworthy? Can we sacrifice 100% accuracy to enable the men with the most difficult job in the league to have confidence in it and take pride in doing it well? These are difficult questions with gray-scale answers, but I believe that until we find a solution which empowers the referees to feel comfortable in late game situations, they will never have the courage necessary to make the difficult and controversial late game calls. Enacting this solution begins with the league front office showing solidarity with its arbitrators, placing its confidence and trust in the men who have a significant stake in determining the outcomes of the season. We are witnessing a standoff, and unless the league can lay down its arms first, somebody is going to get seriously hurt. I leave you with a quote by Ernest Hemingway which I feel embodies the sentiment behind the necessary resolution.

"The best way to find out if you can trust somebody is to trust them."