Stephen Jackson was surprisingly waived on Friday afternoon. Let's try to understand why it happened, and look at what the Spurs are going do in the playoffs without Jack.

Share All sharing options for: Making sense of the Stephen Jackson situation

Since the Jackson news took pretty much everyone by surprise I decided to take a couple of days and try to piece it together here, discuss some theories and then take a look at what missing Jack in the playoffs could mean for the Spurs.

According to Adrian Wojnarowski, Pop and Jackson have been clashing over his role for a while now. Woj claims that there even was discussion of releasing or trading Jackson before the trade deadline. That he wasn't released might suggest that the situation wasn't so bad at the time and both parties thought they could patch things up.

Then on Friday, for some reason, things came to a head and Pop decided that it was the "best for the group" to waive Jackson. Jack then posted this on Instagram: 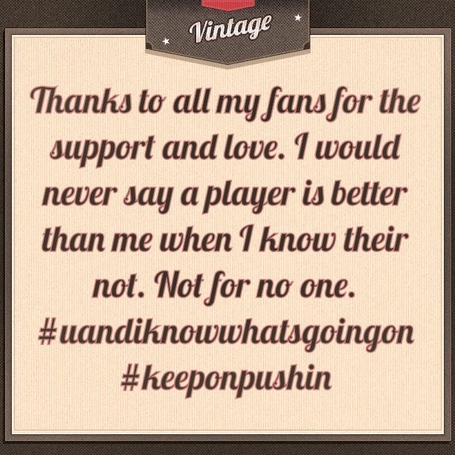 So that pretty much confirms the problem was in fact about his role. It's impossible to know who he is referring to and it really doesn't matter. The coaching staff valued other players over him and he didn't agree. Directly or not, it seems Leonard's ascent just made it impossible to give Jackson enough minutes.

Pop made a point of noting that he thought Kawhi Leonard was a great player and deserved 35-40 minutes. That would leave very few minutes left for Jackson at his natural position and Pop has been reluctant to play lineups including both Leonard and Jackson. If Pop communicated to Jackson that he was going to only be a bit player it's understandable that Jackson wasn't happy with it.

I think the timing might suggest that Jackson resented not being given a bigger role even with Manu Ginobili out. The comment about it being "the best for the group" to waive Jack, when combined with Woj's claims that the Spurs feared Jackson would affect the young players negatively could mean that Jack was airing his grievances in front of others. Jack is a very charismatic guy and it's not hard to see him influencing younger players, both for good and bad. And if his problem was with Leonard getting what Jack considered were his minutes, of course PATFO had to pick their young star over Jackson.

More: What we can expect from Tracy McGrady

There is also the question of Jackson's contract situation. He made it known in the past, even while he played for the Spurs, that he wanted an extension. The Spurs don't offer extensions--Duncan didn't get one last season and Manu didn't get one this season--but it might have become clear to Jackson that the Spurs were not interested in resigning him at all and that could have exacerbated the problems that were already brewing under the surface.

As for Pop, it does seem like the issue could have been resolved better, at least from what we know. If Jackson was unhappy early in the season, the matter should have been resolved then, ideally via trade. The timing of this waiving is as bad as it could possibly be, since neither team nor player have time to find alternatives and it means a distraction right before the playoffs.

You can't help but conclude that either Jackson somehow crossed a line recently or Pop simply made the mistake of putting off this decision until now. Perhaps the fact that he genuinely likes Jack personally played a part, but he is expected to get over that and make the best decision for the team. The tough love and "get over yourself" mantra that Pop preaches doesn't work with a lot of players around the league, and Jackson seems to be one of them. So what was the plan here? Hope Jackson, who had been unhappy for most of the season, was going to respond well to possibly seeing his role reduced even further come playoff time? And if he did want to have Jackson in the playoffs, why not give him minutes at the expense of other guys that won't likely play? Managing personalities is a big part of being a coach and Pop clearly couldn't do it with Jack.

I'll just stop here and say that, regardless of what I said above, I believe taking sides at this point, when we know so little, is counter-productive and misguided. We honestly don't know what happened and who is to blame here. So let's focus on the future instead.

This is where things get murky. The reality is that Jackson has been dreadful this season. Part of that can and should be attributed to injuries and personal problems--these guys are human after all. But he could never give the Spurs what they needed, which was outside shooting and consistent intensity on defense. If I just point to the numbers or show his performance to an outside observer, he would definitely conclude that this wasn't a big loss and that the Spurs might in fact be better off giving Jackson's minutes to someone else.

But the guy Spurs fans are mourning isn't the one we've been watching for the past five and a half months. No. The player we're afraid of doing without is Playoffs Jack. His ability to get away with being extremely physical on defense in the post season will be missed. He stepped up his game when the team needed it most against OKC last year, hitting a ridiculous 68% from three in that series while many other players faded. It's probably foolish to think that he would shoot that percentage from three once again, or that at this point in his career he can stop an elite scorer, but Jackson has a penchant for big plays and I'm convinced he could have found other ways to contribute.

If I wanted to show how the team might be better off without Jack, I would tell you that in lineups that spent more than 30 minutes together ranked by defensive rating, you'd have to go all the way down to 11th to find one that includes Jackson. Or I could point out the two top ten lineups that include Green at SF using those same parameters. I could say that the Nuggets are the only team that has multiple quality SFs in the West and that the Spurs should be fine unless Leonard, who averages less than two personal fouls per 36 minutes, finds himself in foul trouble. I could mention that Jackson had the worse three point shooting percentage of anyone who has played at least 1000 minutes, and has taken more than 100 three pointers and takes more than three three-pointers a game. I could even tell you that Durant scored at the same high rate with Jack on the court last post season. But I have a feeling it wouldn't matter.

More: What can Tracy McGraby do for the Spurs?

I can definitely make an empirical case that the Spurs might be better off without Jack, but I still can't even convince myself of it. Even if the evidence suggests Jack was not playing well, I think he could have contributed something in the playoffs. Pop clearly felt that something wasn't enough to take the risk. It is what it is.

To finish, I will say this: in my view, Stephen Jackson, while potentially valuable, was not going to be the difference between a second round exit or a championship. His crazy offensive explosion wasn't enough to propel the Spurs past the Thunder last season and I doubt he could perform at that level again. The team as a whole needs to step up in the post season, starting with Parker and Duncan, then Manu and the role players. Jack had to shoot 68% from three against the Thunder because the others were not hitting. If they do this year, and the playmakers get everyone involved, and Duncan and Splitter anchor the paint like they have all season, I genuinely believe the Spurs can challenge OKC in the West, with or without Jackson.

The Spurs will win or lose as a team. And while I still wish Jack hadn't been waived, I can find comfort in that.