Are the Spurs a good rebounding team or not?

The Spurs have been called a poor rebounding team, but are they really? Has the rebounding improved this year? If so, who is responsible and would a greater focus on rebounding help the Spurs win more?

Share All sharing options for: Are the Spurs a good rebounding team or not?

When weighing a team's title chances, statisticians often point to the "Four Factors" which determine a team's success. The Four Factors, pioneered by Dean Oliver, author of Basketball on Paper, are essentially shooting, taking care of the ball, rebounding, and free throws. A team's ability to do all of these things well generally translates to its level of success. Efficiency statistics are developed using measures of these four factors, and as theghostofjh points out in his quarter-season breakdowns (and look out for his upcoming 3rd quarter report), efficiency differential is one of the truest measures of success in the NBA.

The Spurs have an excellent efficiency differential of 8.9, second in the league to OKC (11.0!). Nonetheless, I've heard fans clamor that our poor rebounding may be our demise. racm wrote a nice piece in which he weighed the consequences of the Spurs offensive rebounding woes. A lack of second chance points doesn't appear to hinder success, as OKC and Miami are also in the bottom half of the league in ORR, but on a poor shooting night in the playoffs, tip-ins and putbacks sure are a boost.

I'd like to break down the Spurs rebounding statistics for this season to answer a few questions:

1) Are the Spurs a bad rebounding team in general?

Are the Spurs a bad rebounding team?

Yes. No. Both. The Spurs are last in the league in ORR, but 3rd in the league in DRR, putting them around the middle of the pack (18th) in TRR. The Spurs excel at defensive rebounding, but neglect the offensive glass. This could be due to a variety of factors, but I believe that it is largely due to team identity. In his article, racm breaks down the several possible reasons for the Spurs' offensive rebounding woes. While lack of athleticism and strength in the post certainly contribute to the problem, racm points out that Pop's motion offense itself is partially responsible since it does not lend itself to high numbers of offensive rebounds. The bigs are often involved in setting screens late into the shot clock, and instead of crashing the boards, Duncan and Co. generally elect to set up the defense instead of trying to grab potential misses.

As much as anything else, I think the Spurs choose not to grab offensive boards. I don't think Pop gives it much attention in the locker room and the huddle, and I for one am not very concerned about it affecting our title chances. The Spurs are not a bad rebounding team, they are just very picky about the side of the floor on which they rebound. I also think this is why DeJuan Blair will likely find himself in search of a new team at season's end. The team doesn't place a high value on what is arguably Blair's best skill.

The playoffs are rapidly approaching, and we all hope the Spurs will be humming at the end of April. While season averages are useful for comparing teams, we want to see how the Spurs are progressing as a rebounding team. Below is a figure which shows the Spurs' rebounding performances over the season. 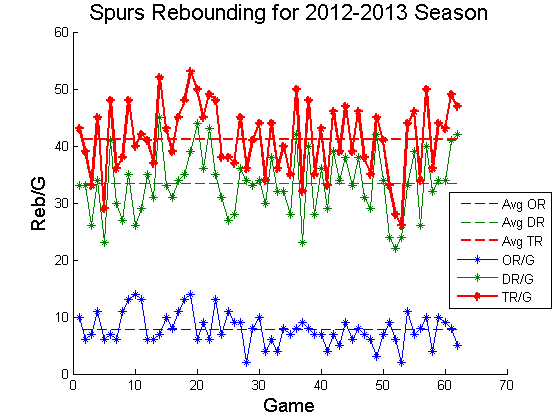 This is a bit of a jumbled mess, but we can see some general trends. Let's apply a filter to the data, which will smooth the data and allow us to see the trends more clearly. Let's also normalize the rebounds each game by the opponent's season average. Any game with a value greater than 1 means we outplayed our opponent's normal rebounding allowance. Any game with a value less than 1 means our opponents held us to fewer rebounds than they usually allow. 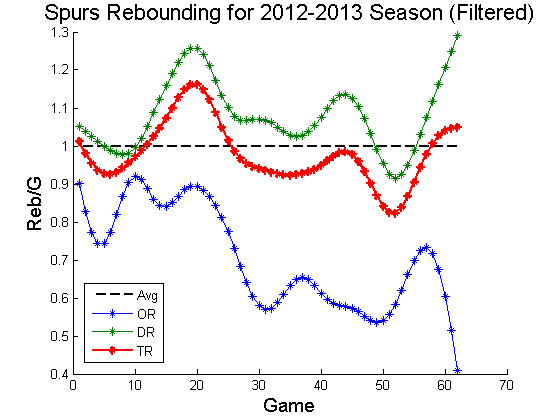 That's better, at least visually. Statistically, not so much. We see several things. First off all, when we are at our best, we rebound better than the league average against an opponent. Additionally, The normalized OR/G has always been bad, but has decreased as the season has gone on, most notable taking a dive starting at about the 20 game mark. The defensive and total rebounding match each other well, and we see two significant peaks (including the current one), and one significant valley, with a mid-season lull. We will talk about those later. In the short term, it appears the Spurs are improving over the last several games, but a general upward trend is not apparent. This isn't troubling so long as the current trend prevails.

Remember that significant valley in the figure above? Well I'm sure a lot of you can guess what happened there, and your guess is probably right. That valley perfectly overlaps with Timmy's absence. Duncan is the foundation of our defense, and with him off the floor we cannot hope to maintain effective defensive rebounding rates. This, along with several other things both tangible and intangible, is why his health is vital to this team. I showed above that, at our best, we outperformed the league average in rebounding. When are we at our best? When the GOATPUFF is controlling the paint.

Below is Tim's total rebounds per game, or TR/G (normalized by his season average of 9.7) superimposed on the previous plot. Gaps indicated missed games. 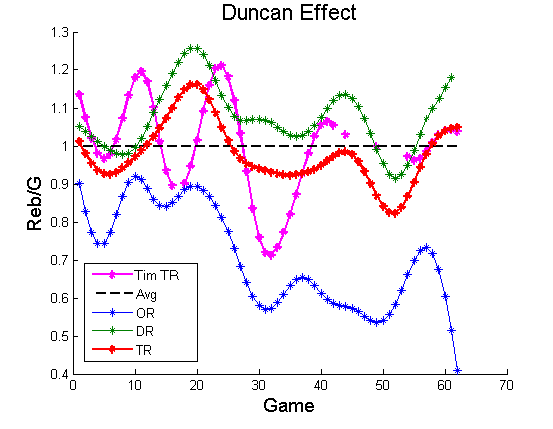 Again, the last valley is a direct result of Duncan's absence. The mid-season lull can be explained by a serious decline for Duncan, his worst rebounding of the season. I'm actually impressed the Spurs' rebounding numbers didn't completely plummet during that period.

The strangest part of this figure is between games 10-25ish, where Duncan experienced a drop off punctuated by his day of rest (Restgate). Despite his drop, the team numbers in defensive and total rebounding soared to the highest they've been all season. How? Who picked up the slack? Enter Tiago Splitter.

Below is Tiago's rebounding (normalized by his season average of 6.0) superimposed on the team rebounding. 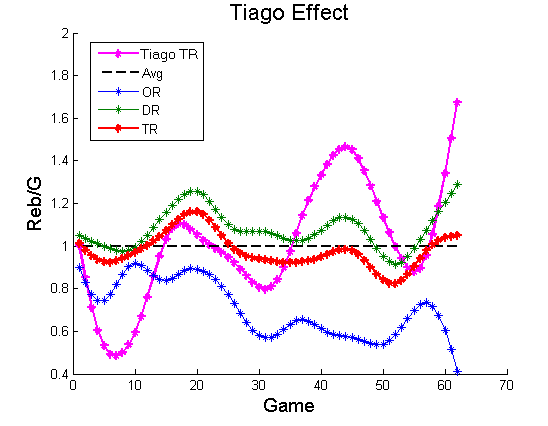 First of all, holy mackerel! Tiago has improved significantly since the start of the season. His peaks are almost perfectly superimposed with those of the team. The same can be said for his valleys. His rebounding early in the season helps explain why we began so poorly on the boards. Despite his clear improvement during the first peak, I am still not convinced, however, that it can explain the team's most significant peak. He was still barely outrebounding his season average at that point. So how about that third big?

Below is Boris Diaw's rebounding (normalized by his season average of 3.6) 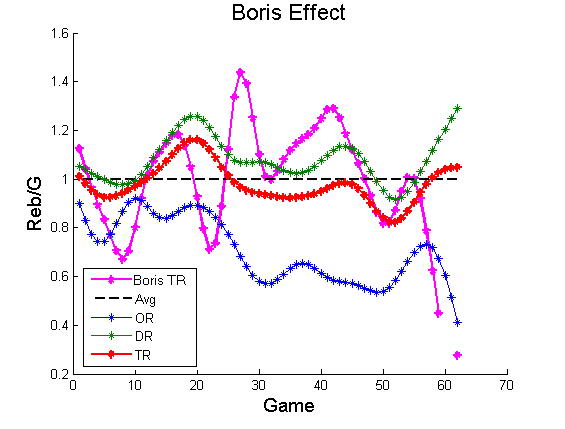 Boris has helped make up some of the slack when Timmy was hurt or playing poorly. His first peak at about game 15 obviously contributed to that stint of great Spurs rebounding early on, but otherwise he does not show much correlation with the team curve. He is rebounding very poorly right now, possibly a byproduct of his lower-back injury that forced him to miss a few games. Hopefully he will heal soon, because his impact is certainly felt in other areas.

Diaw may be the third big, but Kawhi is the better rebounder. His season average of 5.4 RPG is third on the team. He may be a wing, but his wingspan is that of a power forward. Let's look at how his rebounding stacks up to the team's. 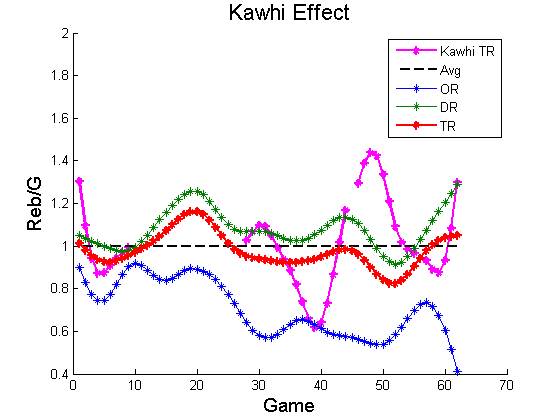 This is a very interesting chart. Kawhi missed 18 games with knee tendinitis early in the season, but his absence almost perfectly coincides with our great rebounding peak. What gives? How could we rebound so well without our third best rebounder? Well, remember that Stephen Jackson missed a considerable portion of that time as well due to a broken finger. As a result, DeJuan Blair received heavy minutes during that period. How does DeJuan's playing time affect the Spurs overall rebounding? Let's see.

For as much as he is maligned/marginalized by Coach Pop, DeJuan Blair can snag some offensive rebounds. I included his normalized OR/G on his chart. He averages 3.9 RPG. 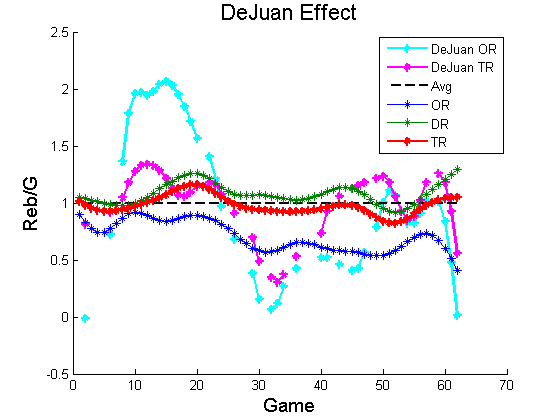 DeJuan's rebounding is largely of the offensive variety, and we can see early in the season that his offensive rebounding levels helped the team sustain its best total rebounding of the season. When Kawhi and Jack came back, DeJuan lost his minutes, and he hasn't offered the same level of rebounding, mostly because he never got enough minutes. When it comes to offensive rebounding, DeJuan is the best we've got. Unfortunately for him, that isn't high on Pop's checklist. I am certain that if DeJuan got the same level of minutes as Kawhi, he would be the second best rebounder on the team. DeJuan's dearth of minutes for the majority of the season suggests that Pop is not concerned with our meager rebounding numbers.

How does rebounding affect performance?

So how does all this pan out? Is Pop's ambivalence toward rebounding merited? Let's look at the Spurs' total rebounding (normalized by opponent season average) means and ranges for wins and losses in the boxplot below: 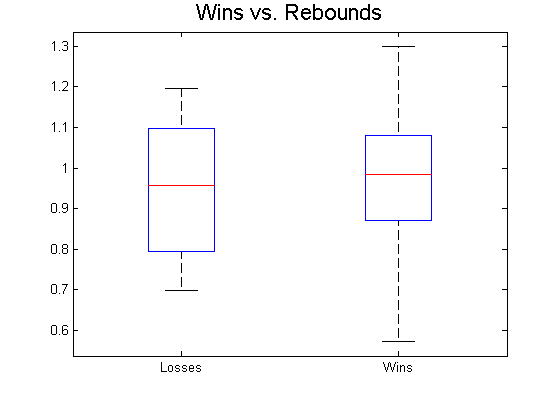 When we talk about the Four Factors, the Spurs make their pay in the shooting categories, with the second highest eFG% (54.06%) and the third lowest opponent eFG% (47.66) for the highest margin (6.40%). They also excel by not sending the other team to the free throw line, with the 3rd best opponent free throw rate. They are slightly better than average in total offensive rebound differential, and slightly less than average in total rebound rate. So while rebounding may not be their area of expertise, the Spurs make up for it by playing smart basketball: take and make high percentage/high reward shots, force your opponents to take low percentage/low reward shots, take care of the ball, and don't foul very often.

Sounds like a recipe for success to me, regardless of what those raw rebounding numbers might seem to say.