Here's a round-up of photos from the Suns, Kings, and Pistons games - fun for everyone here!

The Suns game reignited the competition between Argentine Luis Scola and our beloved Brazilian, a battle of big guys that has been going on for years. 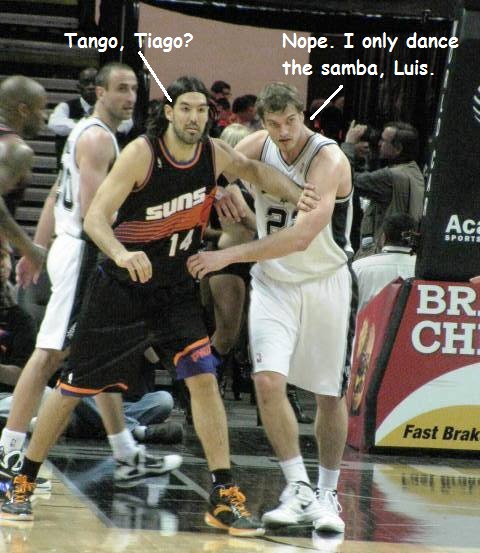 The Suns black uniforms are really good looking, but do they improve the looks of Marcin Gortat? 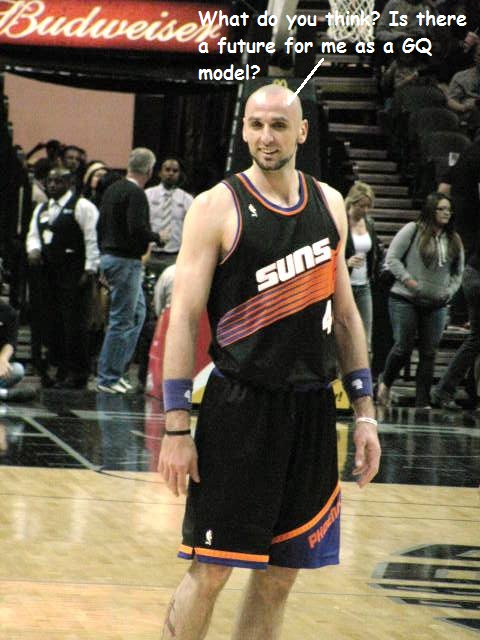 Michael Beasley is beginning to rival The Birdman in the tattoo department. 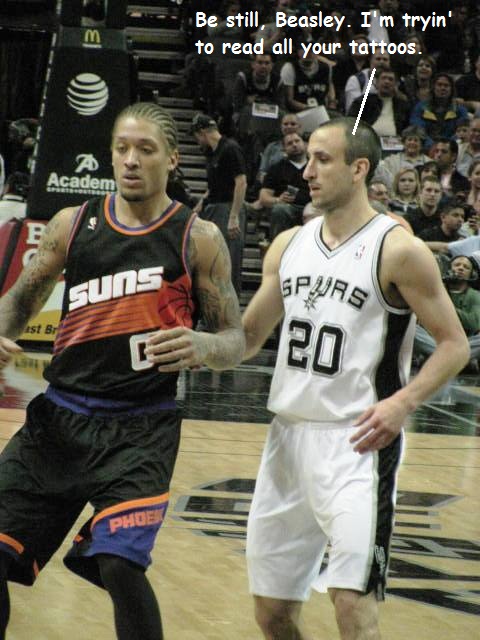 Jermaine O'Neal was six for six from the free throw line with one of the most unusual techniques I have seen. He first gets set, lofts the ball over his head, then turns his body from the waist up a quarter turn so his right side faces the basket, pauses again, and shoots. 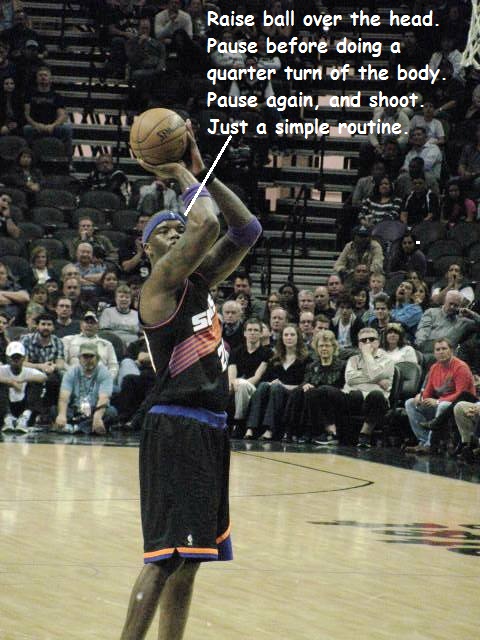 Next came the big win on the scoreboard over the Kings, but the big injury loss of Tony Parker. Before the game I saw Tony do something I have not witnessed. After the captain's meeting at center court, Tony and Tim do a couple of crazy shots in the lay-up line and then retire to the bench to joke around and watch the rest of the team put up shots. They are relaxed, and Tim even takes the time to visit with his kids on the bench. On this night, Tony sat very somber, hanging his head low, and remaining very still for at least a minute. I don't know why he did it, but I thought then it was strange. 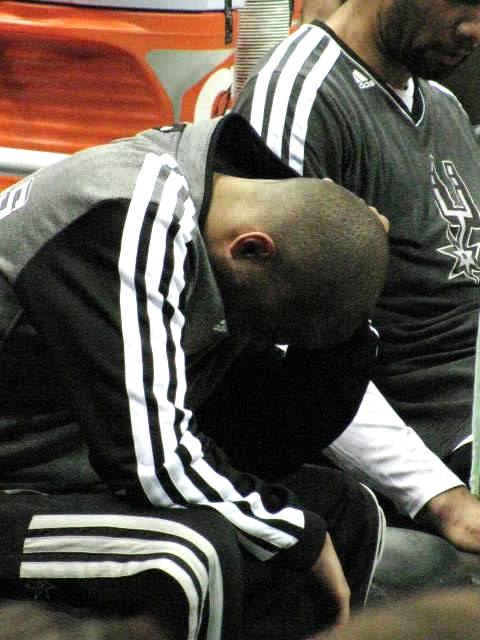 Before the captain's meeting, Manu and Tony talked as they went through their stretching routines. 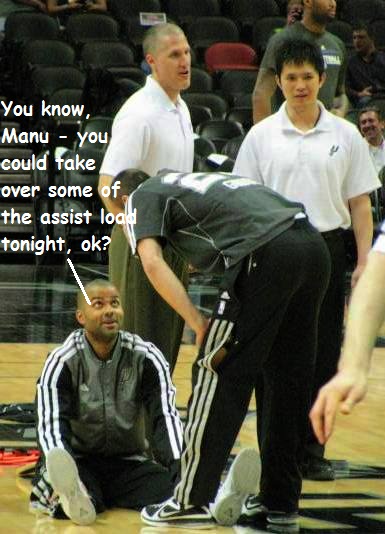 As Kawhi practiced his free throws, Blair seemed to be eyeing his cornrows: 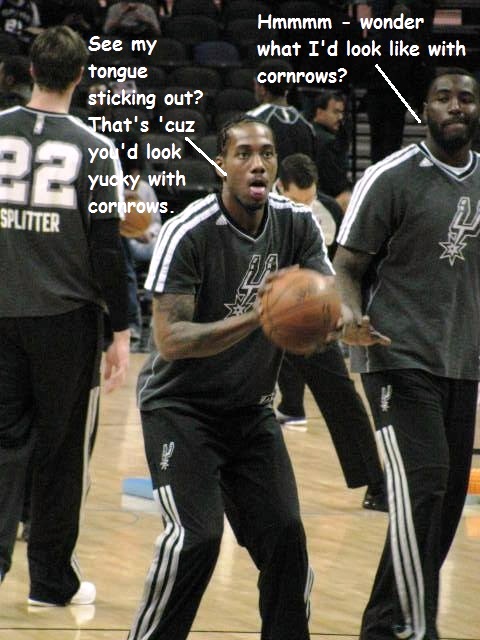 Cory Joseph, filled with adrenaline, played only around 11 minutes before fouling out. Many Spurs fans were recalling the days of Ian Mahinmi, but this was being done by a point guard, not a big man fighting under the basket. His teammates had varying reactions: 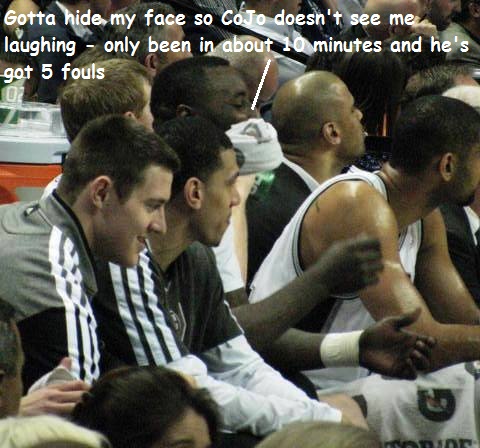 Jimmer Fredette had to guard Manu part of the time on a night when he had 15 assists, and I'm sure he prayed he would not make the highlight reels as victim of the best nutmeg of the night. 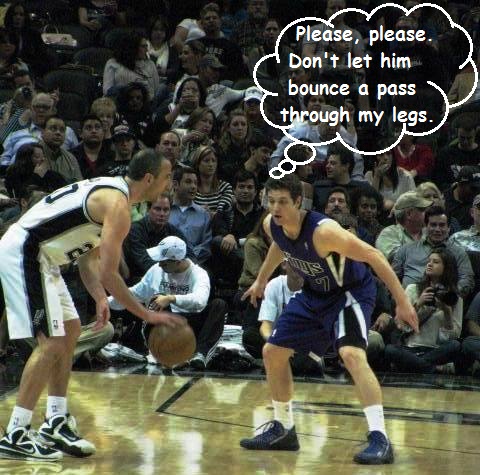 Life Without Tony began against the Pistons, and the Spurs wanted to erase the memory of an embarrassing loss in Detroit last month. Cory Joseph got the starting call at point guard, and seemed a little lost before the opening tip, as seen in these three photos: 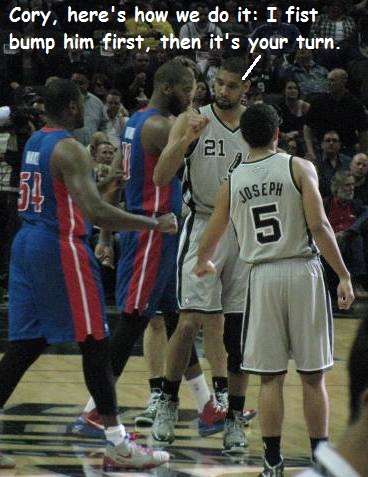 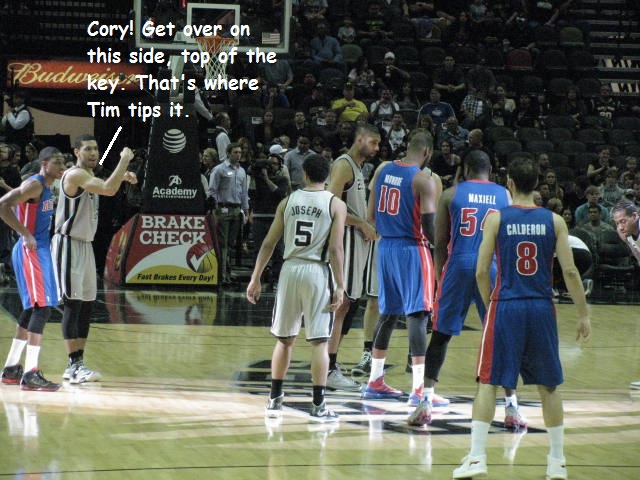 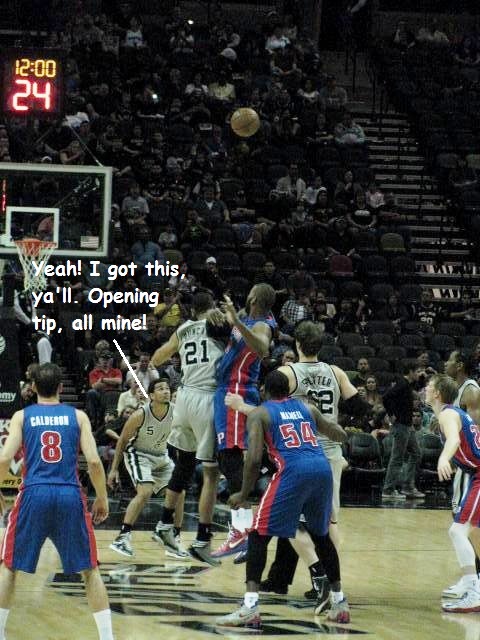 This was the Return of Super Manu. He did not miss in the first half. I watched his pre-game routine about an hour before gametime, and he was easily missing half of his shots, and showing some frustration. But when his first three went in during the first quarter, I knew he'd be okay. Here are photos of two of his drives, although he was pretty much open on both of them, so it may be more correct to call them strolls to the rim. 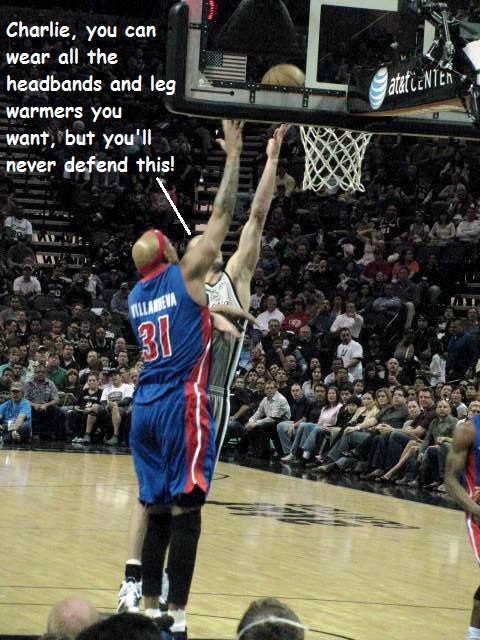 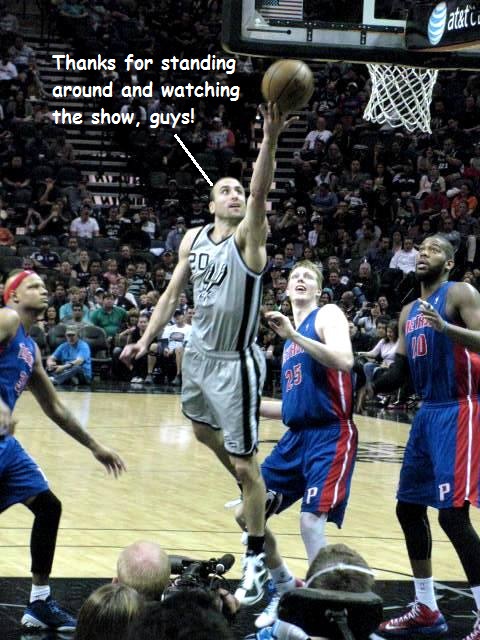 (I'm proud of that last shot - just happened to be in the right place with no one blocking my view.)

And then there was the four-point play at the end of the first quarter. With all the stats that are out there, I wish there was a count on how many buckets he has made at the end of quarters over the years. I have searched the pro photographers pics of this game and I cannot find anyone who got this shot - an exclusive maybe! 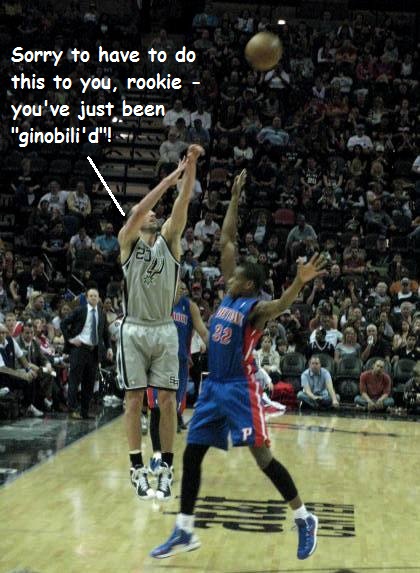 So many of you Pounders cringe whenever Danny Green tries to dribble - this one's for you: 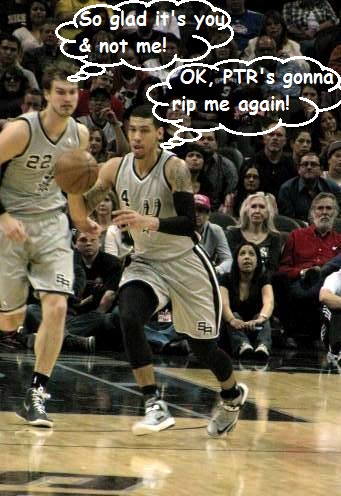 Before he put Gary Neal into the game, Coach Pop walked down the bench and spoke with him for a few moments. As Pop turned and walked away, Neal and Mills began to giggle. 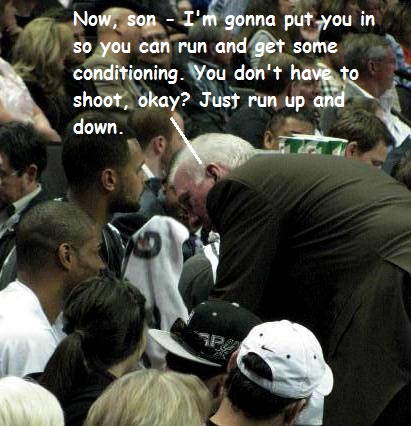 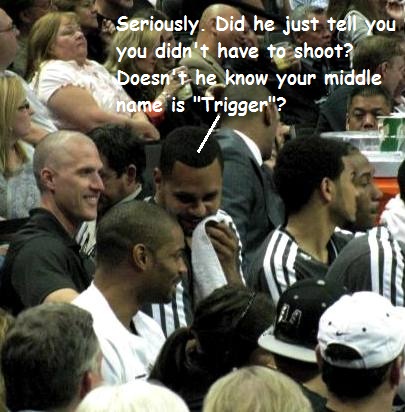 Before the game, most of the sneaker freaks were looking at Kawhi's new shoes, but I was noticing Tiago's - they sparkle! Really! 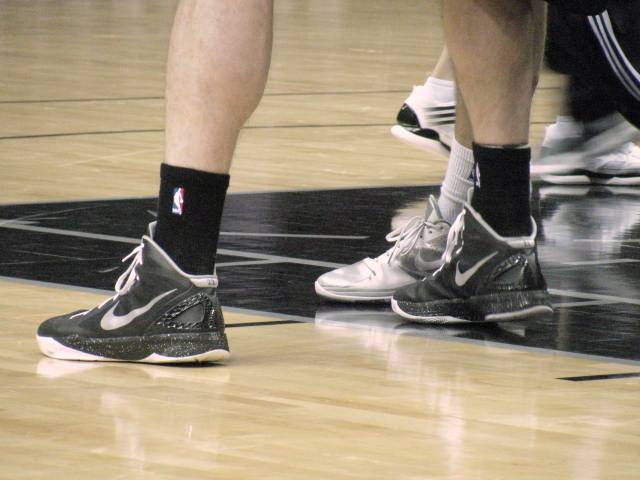 And for all the ladies of PTR, I have to include this photo, especially after I made you endure one of Marcin Gortat earlier in the post - Sparkles just sitting and sparkling! 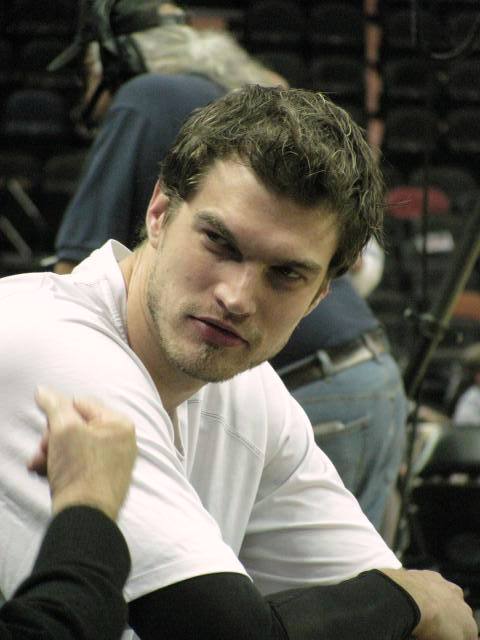 CAPTION THIS: But keep it clean, guys! Manu and Jackson talking on the court: 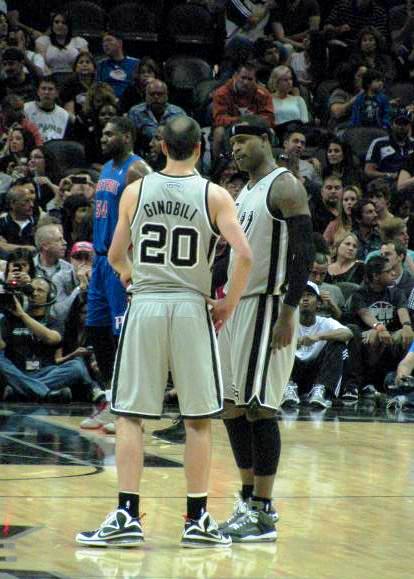