'The Beard' hit another big shot in the waning moments against San Antonio, and the Spurs were unable to answer.

HOUSTON — They're not exactly "in the mud" anymore, but the Spurs aren't back to form yet, either.

James Harden hit what would eventually become the game-winning jumper from the left elbow with 4.5 seconds remaining, and San Antonio (53-17) failed to answer at the buzzer, falling to Houston (39-31), 96-95. Harden's shot — a leaner over Tim Duncan with Kawhi Leonard right on his hip — gave the Rockets' star 29 points for the game, but it was the 15-for-17 performance from the line that really killed the Spurs.

One person felt those attempts weren't necessarily earned — not all of them, at least.

"I don't think he earned 17 free throws. I think we had a couple in there that were missed calls," Duncan told us after the game. "But it is what it is. He was aggressive with it, took shots and made (the refs) make calls and kept them right in the game."

Duncan — who finished with 17 points and seven boards — is not one to complain very often after games, so this came as a bit of a surprise despite the fact he might be right. But Harden's two biggest points, the last two, didn't come at the free-throw line.

"He's a great player. He made a great shot," Gregg Popovich tersely said after the game.

The Spurs had a chance to win with a little more than four seconds remaining, but a play they've run before failed to materialize the way it previously had.

The initial read on the play after Manu inbounds the ball to Duncan is to find Ginobili on the back-cut to the rim, and if that doesn't work it's designed for Tim to go 1-on-1. The Rockets defended the cutter well, even dropping Harden into the paint to deter the over-the-top pass. And when you have a defender like Asik, it's going to be difficult for any big man to go 1-on-1 and get the look he wants in the span of about three seconds.

"I wish I had space to kind of rip it and go to the rim, but he played it well, Manu (Ginobili) wasn't open and I took the shot that was there," Duncan said. "I wish I would have gotten a little more air under it."

Manu's last-ditch effort at the put-back was off the mark, and the Spurs fell. Ginobili said afterward he should have taken an extra tenth of a second or two to get the shot up, but in that situation you're just trying to get the ball up as quickly as you possibly can.

San Antonio used this design twice during their game in Oakland against the Warriors last month. The first time it worked and forced overtime, the second time it didn't, and the Spurs lost in extra time. The only difference was, this time, Duncan took the last shot instead of forcing it to Ginobili. Who knows if the Rockets were ready for the play, but there was a major difference in the way they handled it as opposed to the way the Warriors defended it.

Here's a screen-grab from tonight's game. Notice how Harden's positioning prevents Duncan from making the pass to Ginobili as he makes his cut. 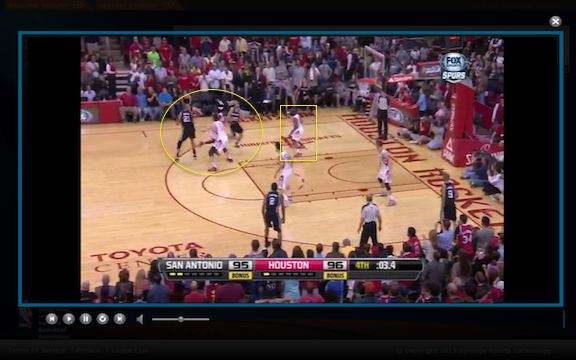 Ginobili briefly outlined the play after the game.

If you look at this shot, Duncan might have had a chance to hit Green in the corner given Harden's deep positioning. Still, who knows how Manu's man — who was beaten on the play — would've reacted. Now here's the play from the Golden State game on Feb. 22, where Duncan was able to hit Manu for a game-tying lay-up. You can see how aggressively Klay Thompson is covering Parker in the corner. 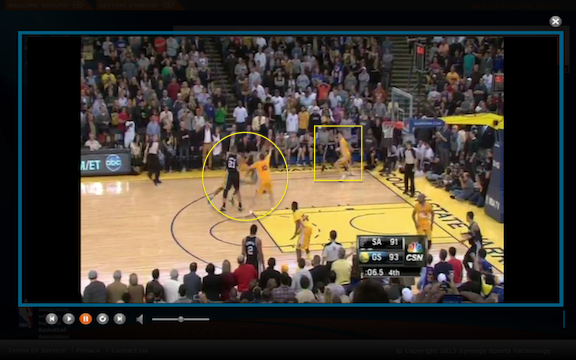 With Thompson so far out in the corner, finding Manu on the cut was simple. Tonight, the passing lane was much more congested. If the Rockets noticed the high action and realized what was coming, then Harden read the play perfectly. And I can't decide if that's the case or if Harden was actually playing bad defense and the Spurs couldn't capitalize. The only reason I bring this up is because you don't often see Popovich recycle sets and plays in end-of-game situations. You almost always get the unexpected. And that design is a great one: hit Manu on the cut, and if the corner defender is sagging off his man to defend the lane, toss it out to the shooter. If that doesn't work, you have one of the game's best big men 1-on-1 at the elbow.

But despite the loss and struggles as of late, Popovich said there is progress being made. That progress becomes masked when you turn the ball over too much, though.

"I think we're playing better. The last few games have been pretty good, and I thought we worked hard tonight and executed pretty well," Pop said. "You can't turn it over 18 times on the road, and we gave Harden a lot of free throws. Those were a couple of things we wanted to guard against ... him at the line. And that didn't work out very well, but when you turn it over on top of it on the road, you're going to have some problems.

"We're probably fortunate to have an opportunity to win the game."

The biggest reason the Spurs had that chance was the play of Tony Parker. In just his second game back from injury, the point guard once again led the team in scoring with 23 points on 7-for-13 shooting. While his explosiveness doesn't seem to be all the way back, he has played well in a full workload, minutes-wise. As weird as it might seem, the most difficult adjustments that have to be made as he reacclimates to the pace of the NBA game aren't on Tony at all. As Pop said prior to his return against Utah, his concern is how his teammates will react after being without their high-usage point guard for three weeks. Turnovers are a part of that, but in general this team looked to be more in sync tonight than it did on Friday.

And now the real fun starts with the most difficult four-game stretch the Spurs have faced all season. The Denver Nuggets are in town on Wednesday, the Los Angeles Clippers on Friday, the Miami Heat on Sunday and the Memphis Grizzlies will host the Spurs on Monday. Two of those teams, the Nuggets and Heat, have combined to win 40 in a row — Denver is on a 14-game streak; Miami's won 26 in a row — and are absolutely rolling.

So that was it for the appetizers, Spurs. The main course is on its way, and the breathing room is shrinking by the day.