Tim Duncan for Defensive Player of the Year: Guarding the Pick and Roll

The NBA has become a league full of teams whose offenses specialize in the pick and roll. Any candidate for Defensive Player of the Year needs to be familiar with all of the options, and able to shut them down. That describes Tim Duncan's game to a T.

Share All sharing options for: Tim Duncan for Defensive Player of the Year: Guarding the Pick and Roll

As you know, here at PtR we are taking a close look at Tim Duncan's case for Defensive Player of the Year. But we can't talk about Duncan without discussing the Spurs' defense first. The best way to characterize the way the Spurs defend would be reactive. That is, as opposed to the proactive defense of other elite defensive squads. While teams like the Grizzlies and Bulls try to anticipate whatever the opponent is trying to do and work to prevent it, the Spurs only focus on preventing certain types of shots while allowing others. The don't take unnecessary risks; they work to force contested or low-efficiency shots and prepare to rebound the ball. Tim Duncan exemplifies that philosophy to perfection.

The Spurs' defensive schemes are conceived to allow mid-range jumpers in order to deter three pointers and shots at the rim. Duncan usually sets the tone for it by hanging back on pick and rolls and waiting for the offense to make a move before helping. At first glance, the Spurs' and Duncan's approach is counter-intuitive; moving before the play unfolds is supposed to allow the defensive team to have the upper hand. But Duncan is so good at protecting the rim without fouling and, equally important, he gets such great rebounding positioning with this strategy that it's able to work as impressively as the more aggressive approaches. Let's see how it works in action.

Duncan on pick and rolls

When he is defending the pick and roll, Duncan always does the same thing: he hangs back to take away the penetration from the ball handler without over-committing, then he recovers to his man. Because he does that, he rarely has to deal with pick and roll ball handlers attacking him, but if they do he can usually stay with them and contest their shot at the rim. Now let's look at how Duncan guards the roll when he is directly involved in the play.

Duncan on the roll man

Duncan will not only allow but encourage passes to the perimeter from the pick and roll ball handler. The idea is to get the opposing team to take long twos, not layups. Here we see Duncan hedging so Curry doesn't have a clear path to the basket while Joseph recovers. 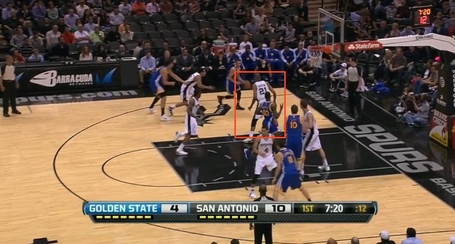 After being forced baseline, Curry makes the pass to Bogut, who has to make the decision between attempting a contested short jumper or going to the rim. 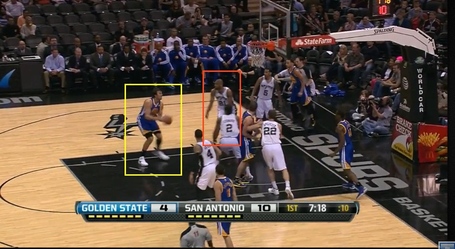 Bogut goes for the dunk. Duncan times it right to block the shot in spectacular fashion -- but that's not the most impressive part of that play. That would be Duncan positioning himself so that he's never out of the play. 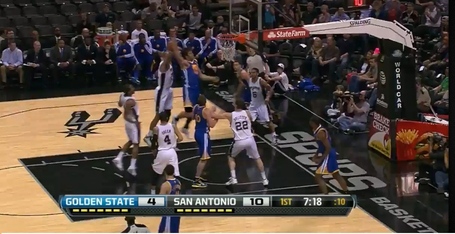 Duncan off the ball

Unlike other defensive standouts like Marc Gasol or Joakim Noah, Duncan doesn't try to anticipate plays and take away the catch on the roll. He maintains good position under the basket to either force the big to pull up or to challenge him at the rim.

In this play, the Warriors have the floor perfectly spaced for a Curry-Lee pick and roll. It's not hard to read the play here, yet Duncan doesn't move into the heart of the paint to take away the roll (yellow arrow) because that would force De Colo to pick up Bogut and would open the corner for an uncontested shot. The Spurs prefer to allow a Lee mid-range jumper or to have Duncan contest Lee at the rim than to leave Jack or Klay Thompson open at the three point line. 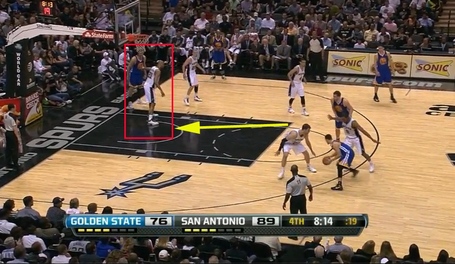 Lee receives the pass while rolling and goes right at Duncan who, once again, is in just the spot to challenge the shot. Lee could have pulled up but since Duncan seems to be a little too under the basket, he decides to go for the layup. By hanging back Duncan encourages opposing bigs to get closer where he uses his length and perfect timing to either contest or block the shot without fouling. 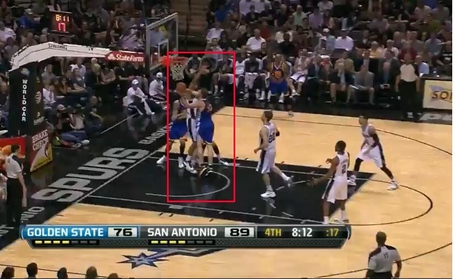 Now, that doesn't mean Duncan always stays back on pick and rolls. When the Spurs face a dead eye shooter, Duncan often steps outside to contest and make that shot as difficult to make as possible. He never wanders too far off, because he understands that allowing a long jumper is better than compromising his rebounding position. But if he's forced to move away from the basket, like on a switch, he can guard the perimeter too.

Duncan after a switch

Duncan hangs back enough to not get blown past, but he's still in position to contest the shot should Curry pull up. The Warriors clear the left side to allow Curry to go one-on-one. 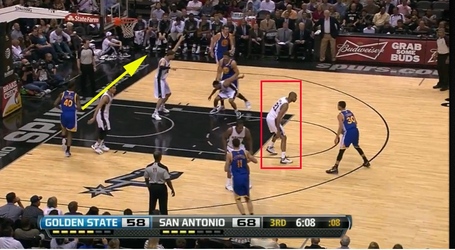 Curry has Duncan trailing him but still in good position to contest. Curry can't even get a shot up and Barnes misses a jumper at the buzzer. 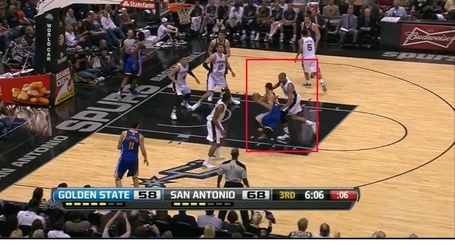 Another aspect in which Duncan excels, is cutting off passing angles. By trying to stay close to the hoop, Duncan can see the play unfold and is usually fast to spot cutters. When he does, he quickly shuts down the passing angle under the hoop. Duncan is one of the biggest reasons the Spurs don't suffer from many open shots at the rim off of cuts.

Finally, the Spurs seem to only overload the strong side when there is a perceived mismatch and Duncan is extremely smart about it. Here, the Warriors are trying to isolate Jarret Jack against Nando De Colo by clearing the strong side. Duncan sees it and slides over. Jack can't attack without running into Duncan. Duncan's man realizes it and starts cutting towards the open spot. 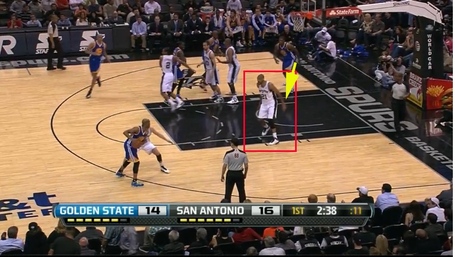 But Duncan is aware that his man will make that cut, shuts down that passing lane, and gets the steal. He effectively guarded two plays at the same time by preventing the Jack isolation and the pass that usually results from him preventing that initial play. 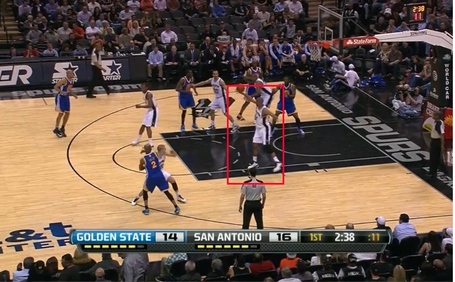 Duncan's preference is to stay close to the basket as much as possible in order to block or alter shots while maintaining rebounding position. Needless to say, it definitely works. Duncan ranks in the top five in defensive rebound percentage and block percentage and while his presence might not discourage penetration as effectively as some of his counterparts do, he does contests and block shots at a higher rate and usually gets his team the ball back.

But elite rim protection is not all Duncan provides. While he is not as good as other DPOY contenders at stepping outside, he can do it when necessary, and he uses his smarts, instincts and length to cut off passing angles or contain perimeter players. The unique combination of elite defensive rebounding and shot blocking places Duncan on a different level. When you add smart decision making on perimeter contests, Duncan has it all and is clearly the best possible fit for the Spurs defense, not to mention a strong candidate for Defensive Player of the Year. While disruption might be flashier, both Duncan and the Spurs opt for a mistake-free, fundamentally sound containment approach. And if both his numbers and the team's success are any indication, it's working.

Keep an eye out for Cameron Archer's next post on rebounding.