The San Antonio Spurs celebrate the return of Tony Parker with a hard fought overtime victory last night against the visiting Utah Jazz. The Jazz, who are fighting desperately for a playoff spot, have been in a free fall for the past month. Today's Rehash looks at Utah's woes as well as tidbits from last night's slug fest inside the AT&T Center.

To say the bottom has fallen out on the Utah Jazz playoff ship would be understatement. At the All-Star Break, the then seventh seeded Jazz held a firm five game lead over the still bumbling-fumbling Los Angeles Lakers. Since the weekend of February 17th, the Jazz have suffered through the perfect storm.

Including last night's game against the Spurs, the Jazz have played fifteen games since the All-Start break but only three of them have been against teams not destined for the playoffs. Eight of those fifteen games have been on the road, including a tough back-to-back against Chicago and New York. Utah has yet to win on the road since their February 13th victory at Minnesota. And to top it all off, the Jazz have been without the services of Al Jefferson, Paul Millsap, Jamaal Tinsley, Raja Bell, and Mo Williams due to injuries or illness.

The end result is a 4-11 record, one of the worst in the league since All-Star weekend. 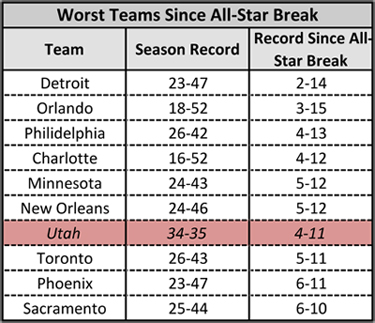 The Utah Jazz still have a shot at sneaking into the playoffs but the window of opportunity is closing quickly. Utah has thirteen games remaining in the season; eleven against the always tough Western Conference and five against +.500 teams. Fortunately for them, eight of those thirteen games are at home in Salt Lake City. Also on their side is the schedule that the Los Angeles Lakers still need to run through.

The Lakers still have the Warriors (twice), the Grizzlies, the Clippers, the Bucks, the Rockets, and your Spurs to finish up the season. The first game against Golden State marks the start of a four-game road trip that includes a three-games-in-four-nights stretch. Utah owns the season series (2-1) so assuming that Los Angeles stays at the eight spot, the Jazz only need to tie the Lakers overall season record to sneak into the post-season. Even though the Jazz are now only two games back from the eighth seed, the Lakers have been one of the "best" teams since the All-Star break (11-4). Catching the Gold and Purple will require the Jazz to go one hell of a run to close the season.

- Popovich on what he thinks his pending 900th career victory.

Be sure to check out Matthew Tynan's recap of last night's game.

Physicality was the name of the game for the Utah Jazz. Utah is the 5th best blocking team in the NBA and showed off their swatting prowess with 9 for the game (4 of those belonged to Derrick Favors). The Jazz were determined to not let the Spurs big men control the game. They fouled hard and immediately sent double-teams any time the ball found it's way into Tim Duncan's hands. Duncan finished the night with 19 points but the bulk of it was through 13 trips to the charity stripe (made 11). The Jazz team finished with a total of 27 fouls but that was something they planned on doing going in.

Kawhi Leonard played like an All-Star last night, scoring 10 of his 22 points in the 4th quarter on 4 of 6 shooting and ripping away huge defensive boards at crucial moments of the game. Leonard continued his dominance in overtime with 5 more points and a pulled down a man's rebound with just under 50 seconds left to go. The evolution of Kawhi's offensive game was evident last night as the San Diego State forward hit from all over the floor. In overtime, Kawhi got Marvin Williams off balanced on the far wing with a ball fake, drove in and then pulled up for a clean mid-range look. This was a weapon that did not exist in Leonard's arsenal two years ago.

Honestly, Hayward had a decent game despite the bad shooting and poor defense on anyone not named Manu Ginobili. After having the ball ripped from him, Gordon hit a big shot to tie things up late in the game. But Gordy immediately lost Ginobili on a left lane drive to the basket.

Spurs-Jazz should look on bright side. I swear 41-38 was the final of half the college games I watched today.

If someone told me Tony Parker was a Vampire, i'd be surprised for a few seconds, then say "Yeah, that makes sense" #UTAatSAS

Matt Bonner scoring from the inside in the last 5 minutes of the fourth quarter?

Kawhi Leonard not only has 21 points, he's had some big rebounds late in the game.

Going into the Next Game, the Spurs Need to...

...find Manu Ginobili's mojo. No one can discount Manu's drive to win but his offensive contributions have been detrimental to the team more often than not. Ginobili made some big plays in crunch time last night but he also made some big mistakes. There is no reason Gordon Hayward should have been left that wide open on the wing, especially with under 2:30 to go in a close game. Just like the Oklahoma City Thunder needed James Harden in last year's playoffs, the San Antonio will need Manu Ginobili to be the Manu of old this time around. After all, he may not have a better, or even another, chance.