San Antonio got its floor general back, but Ginobili's errors were nearly too costly to overcome.

Tony Parker's return to action was a bit more dramatic than most would have anticipated, but it was fitting Gregg Popovich's 900th win came on the back of his All-Star point guard.

The milestone 104-97 overtime victory over Utah could've certainly come a bit more easily for the Spurs' coach, now in his 17th season. But perhaps this type of game is an appropriate reflection of the 899 previous wins. Those battle-tested gray hairs are there for a reason. It's a hell of an accomplishment, but Pop was quick to divert any attention cast his way, as he is wont to do.

"I thought it was a great game. I thought the guys fought hard. Utah is a team that's trying to stay in the playoffs and they are really highly motivated," he said when asked about his latest win in a long, long line of them. "I thought we just ground it out. It was one of our better wins this year for a lot of reasons."

It might have been a good win, but it's difficult to call it a pretty one. The two teams combined for 35 turnovers — the Spurs committing 18 of them — and San Antonio put itself in a compromised position, namely because of the poor play of Manu Ginobili.

On the final play of regulation with the Jazz trailing by three, Ginobili got caught high in the set, appearing to hedge toward Al Jefferson in order to double-team him. But in doing so he left Danny Green alone on the left wing to cover both Randy Foye at the free-throw line extended and Marvin Williams in the corner. 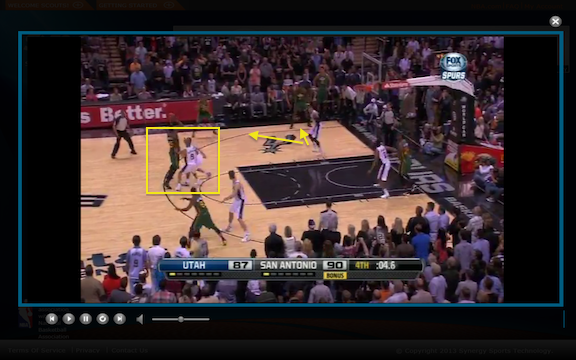 It resulted in a destroyed defensive rotation and a desperate scramble to recover. All Williams needed was a pump-fake to get Manu to fly by before calmly sinking a three at the buzzer. 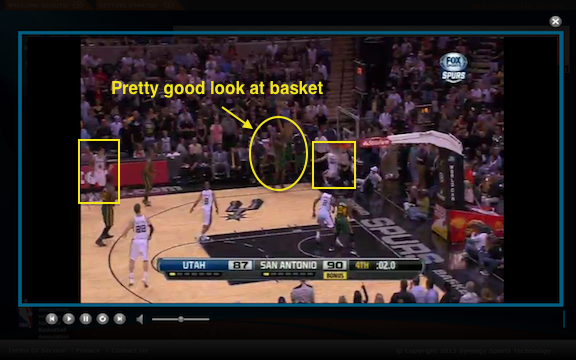 But thanks to 11 combined points from Parker and Kawhi Leonard in the overtime period, as well as a huge redemption 3-pointer from Ginobili, the Spurs managed to sneak by the Jazz and maintain the three-game lead they own over Oklahoma City in the loss column.

"I don't know what I was thinking. Completely (blacked) out. Terrible mistake. I'm disappointed. I'm sorry that I let my teammates down," Manu said. "Today we won it, but in a playoff game it could have been even an elimination. So, I'm very sorry. And it was an awful distraction."

It was a bit emblematic of what's given Pop all those gray hairs in the first place: the play of Ginobili. The saying has always been that you take the good with the bad when talking about Manu; that the good is what typically leaves the most lasting memory. And even tonight that held true as the 3-pointer he hit in overtime — his first of the night after four empty attempts — broke a 95-95 tie and gave the Spurs the lead for good.

But what has developed outside of the Big 3 is the continued evolution of Kawhi Leonard's game. His 21 points were second only to Parker's 22, and he hit giant shots down the stretch on his way to 9-for-14 shooting — 3-for-4 from deep — in more than 42 minutes. His contributions have become not just a luxury, but they've become vital to the Spurs' success. With the way Manu is playing and the big minutes Duncan and Parker are going to be given down the stretch, Leonard's youth and ability will be needed immensely. And it's not just his youth anymore. It's his skill.

This dude can play. He's no longer a role player, he's quickly becoming a star in San Antonio.

At the risk of blaspheming, the Big 3 as we know it is slowly but surely being known by that name only in the history books. It's transforming, and Leonard is quickly becoming a part of it.