Welcome to the first edition of the Morning Rehash: Rodeo Road Trip Über Deluxe Special. Or better yet, the Road Rehash. We'll just go with that one. The San Antonio Spurs first stop on their annual excursion was last night in the frozen city of Minneapolis where the road warriors took on the bedeviled Minnesota Timberwolves.

Share All sharing options for: Road Rehash: Greetins' from Minne-so-da!

Last night's game was against the Minnesota Fighting Whities so this post will be littered with all things Minnesota. As you read on you may notice what appears to be a few sporadic typing errors. Fret not, for I am merely speaking in the tongue of our brethren far north in the frozen woodlands (or, you know, it could actually be a real typo). I have family and friends in and from the region so I am well acquainted with the North-central dialect. Plus, I've seen both Strange Brew and Fargo, so I definitely consider myself to be an expert on the subject. 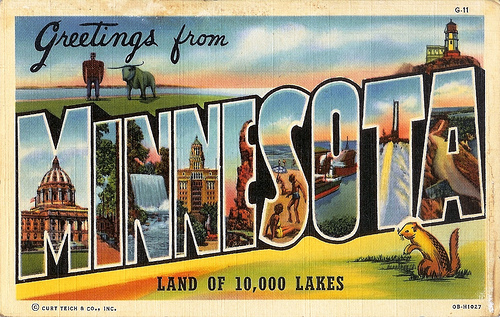 Getting back to the basketballs and whats-it -- The buzzards are circling down on the now 18-28 Timberwolves, who have suffered losses in thirteen of their last fifteen games and who have been separated from their last winning streak of at least two games for nearly two months (Dec. 14th and 15th).

Minnesota is desperately missing star big man Kevin Love, who suffered broken carpal bones in his shooting hand during a late November game against the Denver Nuggets. Injuries have plagued the team since the first tip of the season. Already down Love, Chase Budinger (knee) and Brandon Roy (completely broken), the Timberwolves' also had to go Wednesday night without the Great Red Dragon, Andrei Kirilenko, who strained his right quadriceps in Monday's heartbreaking loss to the Portland Trail Blazers and was originally listed as day-to-day going into last night's game.

Rumors drifting along the February trade winds have most people believing that Minnesota GM David Kahn will not swing for the fences on a big trade. Now 6.5 games behind the Western Conference 8th seed, Kahn is more focused on the development of the young Wolves roster. And with the 10th seeded Los Angeles Lakers beginning to resemble a team that remembers what a basketball looks like, the chances that a "blockbuster" would salvage the season is slim to none (Editor's note: Written before Gasol news. Ugh).

In January, before the team's nose dive through the NBA standings, David Kahn stated the team's focus while addressing rumors on trade talks for the disgruntled Laker Pau Gasol. "Whatever we do to address the now, the one thing we have to keep in mind is [that] it can't be at the detriment of beyond," Kahn said. "It has to be sensible for now and for the future." With the team quickly increasing their odds at the top pick in the 2013 NBA Draft, Kahn's pragmatic stance only makes more sense. Anything rash would just cripple the team in the long run.

Quite a bit is made by the Spurs (and media types) on getting the veteran-led squad some much needed rest. Prior to last night, the Spurs last played at home on Saturday, February 2nd, which seems like a millennium ago when compared to the hectic schedules of November and December. Statistically, the Spurs do almost everything better when they get in a solid 3-day power nap. They shoot a higher percentage both inside and outside the arc, get to the charity stripe more often, rebound better, and they rack up more steals and blocks. The Spurs also turn the ball over more. Much more.

When measured against 0-2 days of rest., the Spurs average 3.8 more turnovers per game when they get 3+ days off between games. Break it down even more and it's still a 3.1 margin between the second highest mark (1 day of rest). However, last night was a bizzaro Spurs version of the metrics.

San Antonio controlled the ball, only letting 13 get away from them, but they shot abysmally against an injury-plagued lottery team throughout huge stretches of the game. The Spurs finished with a 45.7% clip (which is nothing to scream to the heavens about) but the flow of the primary offense was erratic and forced, which caused the interim "Big Three" of Parker, Kawhi Leonard, and Danny Green to take over (who made 75% of Spurs 104 points). But there were also some forgettable moments made among that trio, most notably Danny Green's pull-up jumper on a one-on-three fast break that fell short of the rim by at least three feet.

The Spurs will only get one day of rest before taking on the Detroit Pistons, an Eastern conference bottom feeder but one of the better defensive teams in the NBA. The Pistons are in or near the top third of the league in opponent points per game, field goal percentage, 3-point percentage, and assists. Detroit is also a top ten team in blocks but they might be without leading blocker, Andre Drummond, who is listed as day-to-day after leaving last night's game against the Brooklyn Nets prematurely. The rookie star center from Connecticut has been dealing with back issues.

How do you improve your shooting in the second quarter?

- ESPN's Mark Jones to Popovich. Pop then shanked Mark and left him to bleed.

Yer a Smooth Smoothie, Ya Know?

Danny Green had too many mental lapses for me to give him the nod. Parker, the most consistent "elite" point guard in the NBA took control yet again late in the fourth quarter, directly contributing to 10 points (before free throw-fest) to push the Spurs 3 point lead back up to 9, Tony finished the final 35 seconds of the game hitting 6/6 free throws (not including the miss on the lane violation). Parker hit all 9 of his free throw attempts in the game.

It's hard for me to give a man with 11 assists and only point short of a double-double the dishonor of Game Runt. However, despite the handful of great plays, Little Ricky was forcing the action way too often. To be honest, I'm surprised he only ended up with 3 turnovers. Rubio consistently drove too deep into the trees or put up too many shots outside of his comfort zone, which seems to be anything beyond 10 feet.

Don'tcha Ya Know That Then?

@HPbasketball: Announcers amazed that Green is succeeding after being yelled at by Pop, or as the Spurs call it "every day of their professional lives."

@TortiousTroll: This officiating is awesome, both ways. You can straight shank a man with impunity.

The following spreadsheet will be posted with every Road Rehash. It will compare the Spurs offensive and defensive numbers and the their efficiency during the road trip against the cumulative numbers of the entire season. If Tim Duncan and Manu Ginobili do end up returning some time during the trip, it will be interesting to see the impact in the database.

Data pulled from BasketballReference.com. Effective Field Goal Percentage (eFG%) adjusts for the fact that a 3-point field goal is worth one more point than a 2-point field goal. Defensive Rebound Percentage (DRB%) is an estimate of the percentage of available defensive rebounds the team grabbed. FT/FGA measures the team's ability to get to the line.