What to expect from Life Without Timmy

Tim Duncan has arguably been the best big in the league so far and is at the heart of the Spurs' defensive renaissance. He'll likely miss the next few games. Can the Spurs survive the upcoming Rodeo Road Trip without Big Fun?

Share All sharing options for: What to expect from Life Without Timmy

Tim Duncan is listed as day-to-day with ankle and knee sprains after a nasty collision with Martell Webster. While his MRI didn't show structural damage, it's very likely that the usually cautious Spurs shut him down for a good while. Manu Ginobili will likely be out as well but we've, unfortunately, discussed Life Without Manu several times before. So how about Life Without Timmy?

Can the the other Spurs make up for what Duncan provides?

One of the most importance aspects of Duncan's vast impact on the team was rim protection and opponent shot selection. Check out these opponents' shot charts with Tim on and off the court. (Click to enlarge) 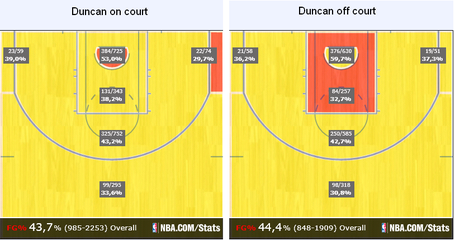 With Duncan on the court, the other team took less shot attempts at the rim and converted on only 53% of those. With Duncan off the court they converted at a 59.7% rate. That's a huge jump in efficiency and coupled with the increase in free throw attempts (from 17.5 to 22.4 per 48 minutes) the team concedes when Duncan sits, it makes me question how well the defense will hold with Big Fun out. No other Spurs player has that effect on the team's interior defense because no one can block and deter shots like Duncan. So the answers will have to come from a team effort.

Fortunately, the Spurs have had great success with Boris Diaw in Duncan's place in the starting lineup. The sample size is not huge but in 74 minutes, the fourth most used lineup of Parker-Green-Leonard-Diaw-Splitter has a fantastic net rating of 19.6, rebounds on defense at a very good rate and boasts a fantastic assist to turnover ratio. They hold their opponents to fewer points in the paint than the team average while scoring more than the average themselves. If Pop starts Diaw, the starters should still be a good defensive unit and rebound at an above average rate. The question is, can they keep it up for longer stretches? Because they'll likely have to.

The other Duncan-less lineups either include Ginobili, or struggle significantly on one side of the ball. Assuming Diaw starts, the Spurs will need at least one other big to step up.

Who should be the new third big?

Bonner and Blair have been in and out of the regular rotation a few times throughout the season. One of them will have to give the team some solid, consistent minutes in Duncan's absence, likely next to Tiago Splitter, who will certainly see his minutes increase. Bonner has had success in that situation in the past and even some this season, but that success was mostly predicated on offense. With the Spurs placing more emphasis on defense this season, Gregg Popovich might think twice about giving the Splitter-Bonner pairing more time together. I'd argue that at this point of the season and with Duncan likely out just a few games, going with this more battle tested duo instead of the sparsely used Blair-Splitter pairing is the way to go. If Pop thinks the team can overcome the spacing issues that will result from having Tiago and DeJuan on the court at the same time, I could see him give Blair some minutes and see if he can get back to early season form, when his defensive rebounding was stellar and his defense was solid. Otherwise, I expect to see Bonner backing up Diaw.

The problem then becomes forming an effective pairing that doesn't include Splitter. Tiago will need to rest and lineups featuring Diaw without Duncan or Splitter have been mostly terrible. Neither Bonner nor Blair seem to do enough to cover for Boris' weaknesses. Opponent's points in the paint unsurprisingly shoot up and the net rating from both pairings are negative. If Pop goes with someone next to Boris it should be Blair, as the interior defense is not as bad as it is with Bonner and the defensive rebounding is actually good. Ideally, Diaw shouldn't be on the court with anyone other than Splitter or Duncan. Which means that, most likely, Pop will go with the dreaded Bonner-Blair pairing that, despite its reputation, has been solid when used this season.

The wild card here is Aron Baynes. The Aussie could theoretically fill in as a rebounder and rim protector adequately enough to earn some minutes at the expense of Bonner and especially Blair. No one will confuse him for Duncan but his height and defensive instincts could make up for the unfamiliarity with the system and provide the Spurs with the 10-15 minutes of at least average defense they need when Splitter sits. It wouldn't hurt to give him a chance.

Who can benefit from Duncan being out?

The obvious answer here would be DeJuan Blair. I'm not bullish about how well he will perform at a team level without Duncan but if he in fact gets playing time, it wouldn't surprise me to see his individual numbers rise. This could also help the Spurs try to get some value back for him before he almost assuredly leaves in free agency.

As I've mentioned, Duncan's absence could also give Baynes a shot at making a case for playing time this season. If the Aussie doesn't mess up on defense, he could vault past Bonner and Blair as the Spurs' 4th big going into the post season. He showed off his range in the D-League and his rebounding is already very good. It's a long shot for any player to come in and learn the ropes so quickly so I wouldn't count on it happening but at least he will have a shot.

Stephen Jackson and Gary Neal could also see their minutes increase and their roles on offense expand during TWODAM (Time With Out Duncan And Manu). Both guys have been having a mediocre year and will become free agents at the end of the season so they will need to take advantage of this potential surge in minutes and touches, considering the Spurs might decide to trade them mid-season or opt to not re-sign them in the off season if their production doesn't improve. Jackson could slide to the 4 at times, making room for Neal in small ball lineups and they will probably have more of a green light to create for themselves. Showing veteran leadership and poise could also help their chances of landing a bigger contract either with the Spurs or elsewhere.

So Life Without Timmy will bring some predictable challenges like finding another offensively productive yet defensively solid big man but it will also allow Pop to see what he has on the bench, thinking about the playoffs. It's likely a do or die situation for Blair and Baynes in terms of cracking the rotation this season. The absence of two of the Spurs' stars will also provide Jackson and Neal with more touches and a chance to get out of their offensive funk. If the injury is not severe and Duncan misses only a handful of games, I like the Spurs' chances of staying at or near the top in the West, especially considering that, while a lot of away games await, few of them are against serious opposition. Let's hope Tim can get back on the court fast, knowing there's no need to rush anything. Fortunately, PATFO knows that more than anyone.