How important is playoff experience to Coach Pop?

Several prominent Spurs role players of the past and present share a common trend in their first few playoff years. Can we expect Neal, Leonard, and Green to perform similarly in this year's playoffs?

Share All sharing options for: How important is playoff experience to Coach Pop?

J Gomez recently wrote a great article on a topic that has been on a lot of people's minds: who should back up the league MVP Tony Parker? According to the poll at the bottom of his post, as of my writing, a majority of fans (44%) prefer Patty Mills or Nando de Colo (36%) over Gary Neal (18%). It's easy to see why Gary has been disliked this season, and JG's analysis is thorough in its statistical breakdown and insightful in its conclusions. If you haven't read it, do yourself a favor and check it out.

Despite the fan clamor, Pop has insisted on giving Gary his minutes (I never thought it to be true, but apparently Pop doesn't actually listen to us fans). Gary hasn't been shooting well and he probably couldn't guard Alcatraz from a helicopter on a clear day. But Pop sticks with him nonetheless. One thing I've been considering a possibility is that Pop really values playoff experience. He clearly values it so much that he is willing to continue to let a player who has been one of the biggest statistical letdowns of the season take the court in favor of less experienced but seemingly more capable players.

In addition to the backup PG situation, a lot of us have asked, "What is different this year? How are we gonna win #5? Same lineup, same problems, right?" Well I believe a large part of the difference could be the valuable playoff experience Danny Green and Kawhi Leonard received last year. Subjectively, I see both of these players increasingly embracing responsibility for the success of this team. I find that much less frequently they are caught simply looking at the Big Three and waiting for something to happen. This is apparent in Danny's go-ahead triple in LA, Kawhi's game-winner at Cleveland, or Kawhi's dominant performance against Chicago when the Big-Three rested sat due to their injuries. Some of this can be attributed to Pop's decisions (e.g. Restgate I & II), but I also think that these two boys grew into playoff men last year.

These two issues got me wondering just how important playoff experience is. How much playoff experience is enough? My gut feeling is in line with Pop's: playoff experience is critical. Still, I wanted more concrete answers to these questions. So, being the engineer that I am, I naturally dove deep into the statistical waters. After much searching, compiling, and Matlab-ing, I decided to keep it relatively simple and chose to look at how a player's Net Rating (ORtg-DRtg) changes from the regular season to the playoffs. That is, how does that famed playoff atmosphere affect a player's ability to reproduce, relative to his regular season numbers?

A small sample of Spurs

What I'll do is track the careers of a handful of Spurs role players who were/are similar to Kawhi, Danny, and Gary to see how their PER numbers over their career changed with increasing playoff experience. Since this is a Spurs blog, I'll focus on our boys in Silver and Black. Here is a list of the Spurs I will include, their rookie seasons, their first playoff season, and the number of playoffs seasons in which they participated. Many of these players played several playoff series for other teams.

*Bruce Bowen only played in one game for the Miami Heat his rookie season. Statistics will begin from his second season.
**Players were only credited with playoff experience if they averaged at least 10 minutes per game for one full playoff series.
In assessing playoff performance, I propose the Player Playoff Rating Ratio (five times fast, now). The "P²R²" (or P2R2) is simply a fancy way of describing a simple stat I developed to assess changes in Net Rtg from the regular season to the playoffs. It is defined as the ratio of a player's playoff Net Rtg to his regular season Net Rtg for a particular season. For instance, let's say I played in the NBA this season. My defense is pretty good, so I'll put my DRtg at 96, and my offense is decent, let's say an ORtg of 100. Now it's playoff time, and coach told me to guard Kobe, so my DRtg struggles a bit and rises to 98. But since Kobe is guarding me, and as of late he has shown little interest in playing defense, my ORtg soars to 110. So my P²R² would come out to (110-98)/(100-96) = 3. That's a pretty good rating. Ok, enough daydreaming for a day. Below is a chart of each Spur's P²R² over his playoff career. 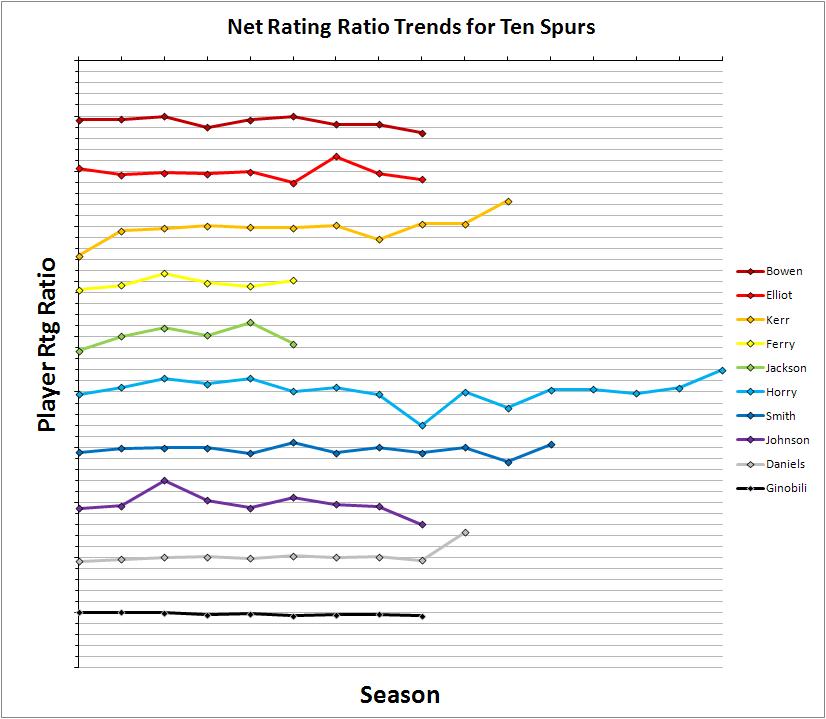 There are a few things to note about this chart. The first and most important is that for all of the players but Elliott and Ginobili, each player improved his P²R² from his first playoff season to his second. Additionally, the ratio continued to rise in the third season for all these players.
For most, the rise halted during the fourth playoff series. There isn't much else to glean from this chart. Some players like Manu, Bruce, and Avery steadily declined in the dusk of their careers, while others such as Steve Kerr and Robert Horry rediscovered the playoff fountain of youth late in their careers.
So it seems we may have answered our question. A player needs about three years of playoff experience to learn the playoff ropes and adapt to the changes in pace and physicality associated with playoff basketball. After that, it's anyone's guess as to how they will perform. Granted this sample size is super small, but each of these players in some way or another resembles one of our three young playoff players, so it seemed fitting.

I fully expect Kawhi and Danny to show up for the playoffs. Each is set to start in his second (significant) playoff series as an NBA player. The perimeter D will give opposing point guards nightmares, and the threes will rain from the corner and beyond. The verdict is still out on Gary, however. Going in to his third playoff year, he has the experience which Nando and Patty don't have, which is certainly a plus, but he has struggled tremendously this year. If he can first get healthy and then climb out of his hole and regain his shooting confidence, I expect him to be good for a couple of clutch, late-game playoff shots. If he doesn't, then his inability to outweigh his defensive lack with shot-making ability could have serious repercussions for the playoff success of this team. One good thing: his P²R² improved from a -8 in 2010-2011 to a +8 in 2012-2013. Let's hope he can get that nagging calf injury healed up and continue the upward trend into his third playoff experience.

I have to gush a bit and say how honored and humbled I was when JRW invited me to write for Pounding the Rock. It was only recently that I discovered how great a community this is, and how knowledgeable, insightful, and respectful all of its members are. I feel like sapling among redwoods, a Muggsy among Yaos. Thanks for reading.