How important are balanced lineups to the Spurs?

The lineup the Spurs used at the end of the first quarter and the beginning of the second tell us a lot about what combinations might works and ones won't.

Share All sharing options for: How important are balanced lineups to the Spurs?

Last night the Spurs were leading the Warriors by four when Bonner and De Colo joined Ginobili, Leonard and Diaw on the court. Neal would eventually come in for Leonard. When the Diaw-Bonner front court was broken up, the Warriors led by 5. This is how the Spurs finished their offensive possessions during that span:

Manu gets a screen from Diaw and uses it to attack Carl Landry. He gets to the basket and scores. Leonard was still on the court next to De Colo and the aforementioned trio.

The Spurs move the ball around until it gets to Kawhi Leonard, who receives a high screen from Diaw. Landry stays with Leonard until Barnes gets back, knowing that Diaw won't roll to the basket. Leonard takes a contested long jumper and misses.

Manu Ginobili tries to call Boris Diaw for a screen early in the shot clock but when Diaw doesn't arrive fast enough, he tries to attack the still not set defense. He gets separation through a spin move but can't sink it.

Diaw sets a high screen for Manu and the Warrior players stick close to Ginobili, not allowing him to go to the basket. Diaw tries to dive to the basket but Landry covers him. Ginobili is behind the three point line in the middle of the court with 12 second left on the shot clock. Diaw sets another screen and dives. Matt Bonner's man helps without over-committing and Manu gives Bonner the ball. He pump fakes, "penetrates," and kicks it out to Neal, who makes a cross court pass to De Colo. He misses the three pointer.

Neal gets the ball at the top of the arc after coming off a Bonner screen that fails get the defender stuck. The quick three isn't there so Neal passes to Bonner, who passes to Ginobili coming off a screen in the weak side. Jack is cheating off De Colo which allows Landry to cheat off Bonner and cut the path to the basket. The spacing is a mess and Ginobili settles for a long jumper that misses.

De Colo finally gets to run a high pick and roll. Diaw sets the screen but stays behind instead of following Nando to the basket. De Colo attacks Landry, who blocks his shot. Manu recovers the offensive board and scores. End of the first quarter.

To start the second quarter the Spurs try to run the same play to get Neal open off a screen but the Warriors, again, don't get tangled in the pick. Neal takes a couple of dribbles to his right and shoots a three that misses.

Ginobili and Diaw run a high pick and roll and Diaw stays back again. Manu faces Landry but instead of attacking him takes a step back jumper that falls.

The Spurs force a switch after Bonner sets a screen for Ginobili and Manu takes a step back three pointer instead of attacking Landry. De Colo's man was cheating off him in the corner, ready to swipe at the ball.

De Colo gets Gary Neal the ball to run a high screen and roll with Diaw. Neal dribbles away from the screen and passes to an open Diaw 18 feet form the basket. Diaw is wide open because the Warriors don't respect his shot, which worked for them since he misses. After the Warriors score Pop calls a timeout and subs in Duncan for Diaw.

During that period the Warriors outscored the Spurs 15-6. Only Ginobili scored. This is how the Spurs' shot chart looked like: 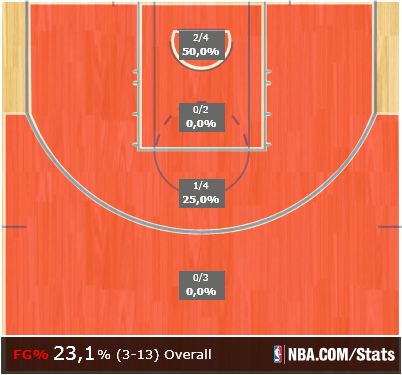 The Spurs didn't necessarily lose the game there and this is only one game but it revealed some interesting things about how lineups need to have balance. Let's take a look at some of the problems the De Colo-Ginobili-Neal/Leonard-Bonner-Diaw lineups has.

This was only one game and the Spurs should be able to keep either Splitter or Duncan in with Diaw for the most part in the playoffs. In the second half Pop simply rested Splitter a little earlier and then sent him in for Duncan. Also, unless Jackson is hurt he should take some of Neal's minutes and De Colo wouldn't see the floor.

Still, this game was a good look at how a Diaw-Bonner front line looks like and it isn't pretty. Both those guys can play next to either Tiago or Tim but as a pair, they just lack the threat to score inside the perimeter guys need. The multitude of long jumpers the Spurs took when they were in is also the fault of Neal, Ginobili and even Leonard for settling for those shots but creating better looks when teams can crowd the playmaker knowing that the bigs are not a threat is hard even for good creators.

Looking forward it will be interesting to see if Pop rests Duncan and Splitter at the same time and if he sticks to the Bonner-Diaw pair when he does or chooses Blair who, for all his flaws, knows how to roll to the basket. The other thing to keep an eye out for is how the Spurs use De Colo or even if they use him going forward. It looks like Neal will be the back up PG in the post season and if the Spurs keep playing Nando off the ball I don't see that changing. Considering the team is entering the last stretch before the playoffs, it will be interesting to see how the rotation finally settles.