A cyclone of energy, whether playing in the game or towel-waving from the bench, Patty Mills also a passion for life, family, and those in need. San Antonio Spurs point guard and Australia's favorite son, Patty Mills, sat down with Pounding the Rock to discuss his love for charity and those who have helped him.

Share All sharing options for: Keep the Passion: Patty Mills

You've been pretty audible on the work you have done in the past with charities, most notably through twitter. What has drawn you to charity work? I think the charity that I picked. Well, it started with the first project we had with the Queensland flood relief back in 2010. I felt helpless being in the States and not being in Australia to help out so I started to try and help out with different charities in Australia. Of course, that project we raised over $40,000 for that flood relief and then I found a charity that hit close to my heart with Cottage By the Sea, which is in the township of Victoria. Cottage By the Sea is a short-term base for kids that are experiencing troubled times at home and I felt like it was a way to help them out.

Had you done any other charity work prior to 2010? No, that was my first charity work and, of course, that was with Wears My Shirt. All the stuff we do at the moment is through Wears My Shirt. The founder of that company, Josh Unruh, enlisted me to try and help them. They're based out of Portland, Oregon and we've done such a great job with the Queensland flood relief that we thought we would keep it going and then see how much money we could raise just by selling different designs of shirts and stuff. 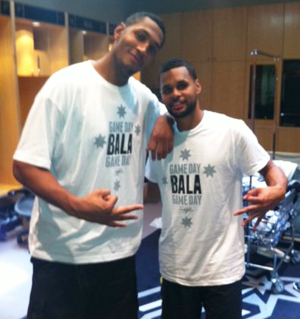 What makes Wears My Shirt so different or stand out from other charity foundations? I think it gives me a chance to create a shirt and a design on really anything that hits home for me. With Queensland flood relief, we were able to do "Assist Australia," which was the name of the project. And pretty much design and create shirts that people would like and like to represent, and not just at sporting events but on a regular basis. It's a cool kind of concept.

Did you design the shirts or just have input on them? I designed the shirts alongside Josh Unruh and we kind of put a little deal together, with the latest one being the "Australia Day." What you see on the Australia Day shirt is stuff that I would say around the [game] and in everyday use, the boxing kangaroo in the middle, and the date on the side - that kind of stuff. It's meaningful and I have fun with it.

What has been the reaction like to site since you've started working with Wears My Shirt? It's been great, a lot of traffic drawn to the site - from people in San Antonio, in Texas, all around America, and Australia. We've got people from Argentina and Brazil and France that would tweet it as well. We have a number of orders from all around the world. I mean, it's huge and the company is becoming big and it's been great. The stuff now is just trying to get the shirts out to the people. Sometimes in Australia it takes a while to get them their shirts but we get them out there.

What is your vision for your foundation through Wears My Shirt? I haven't really thought about it but, just quickly, I think it's using Wears My Shirt as an opportunity to help other charities raise money in a cool kind of way, designing shirts. I'm having a lot of fun doing what I'm doing at the moment, helping them raise a lot of money, so I think we just keep going and it can be an on-going thing.

"I know that once I finish playing basketball, and I don't have the same media attention behind me, I won't be able to help out as much. I need to do as much as I can now."

You mentioned earlier Cottage By the Sea, which you are an ambassador for, what led you to partner with them? It hit home when I found out about Cottage By the Sea. One reason is Cathy Freeman, who was a huge idol of mine while growing up in Australia; she is also an ambassador for Cottage By the Sea. For me, Cottage by the Sea being a short-term base for kids that are having troubles at home or missing home. They can go to this place so they can have fun and take their mind off whatever is going on at home or whatever. That kind of reminded me of what St. Mary's, my old college, means to me. I'm here in America, a long way away from home with no friends or family but St. Mary's is always a place where I can go back and it feels like home. They look after me, they let me use the gym, they let me eat in the cafeteria. I have coaches and a lot of friends around there. That's my relation to Cottage By the Sea - I feel like St. Mary's is that "cottage by the sea" for me here in the states.

The time it where helped me out the best - the two times actually - was right before I got drafted when I broke my foot and I hadn't actually signed a contract with the Blazers yet. I was down at St. Mary's for a number of months, doing my rehab and helping. So they helped me then. More recently was after the lockout, before I came to San Antonio I was St. Mary's for the three months just kind of working out, hanging out. That was when I found out about Cottage By the Sea and I related to it very well.

The NBA and the San Antonio Spurs are very involved in the community and charity work. Aside from what you have done through the Spurs, have you done anything locally in Portland or San Antonio? No, other than when we were in Portland with Assist Australia project we got out in the community and made appearances at different colleges - University of Oregon, University of Portland. Around malls and stuff and it was a lot of fun. I brought my teammates out to come for half an hour, an hour and sit down. It was really cool but not so much here yet. We have something in the works at the moment, something to do with the towels and waving them. Hopefully we can get that done soon.

If you could give a message to the people who aren't active or are looking to be active in charity work, what would it be? You got to give back. Charities are really important and I think it's good if you could find a charity that relates to you in any way like Cottage By the Sea for me. Especially me, with the position I'm in now playing in the NBA, I feel like I have to use my status to help charities. If I wasn't doing that, I wouldn't be doing anything good. It's important for me to use my stature to help charities out as much as I can. I know that once I finish playing basketball, and I don't have the same media attention behind me, I won't be able to help out as much. I need to do as much as I can now.