Tiago Splitter and his mastery of pick and roll scoring

Tiago Splitter isn't the most athletic guy; he doesn't have anything close to an elite vertical leap and he's not too fast. And yet he gets open in the paint for point-blank layups and dunks with frightening regularity. How does he do it?

Share All sharing options for: Tiago Splitter and his mastery of pick and roll scoring

Most players that are good enough to start in the league have at least one go-to offensive weapon. For years it was believed big men needed traditional post moves to excel in the league. But as the NBA has shifted towards more mobile bigs, and since the pick and roll has become the play of choice, the need for a big guy to be the dive man after setting a screen has increased exponentially. This is especially true for Spurs bigs, considering Parker and Ginobili, two expert pick-and-roll ball handlers, are calling most plays

Tiago Splitter actually has some post moves--none are very pretty, but his up and under and his right jump hook are quite effective. He can also score off offensive boards and trail the break. That said, the vast majority of Splitter's offense comes from the pick and roll, where his understanding of space and passing angles is truly second to none. Splitter sets solid screen, but his mastery of the pick and roll resides on relentlessness and fundamentals.

It's not uncommon to see Tiago set a screen, then turn and attack the interior of the defense, usually before someone rotates. A lot of players can do that but what sets Tiago apart is his ability to catch the ball even when it's coming from strange angles, and finish despite not being the most athletic of players. It's easy to understand how Amar'e Stoudamire was able to score at such a high rate off the P&R: the guy was strong and could jump out of the building. Splitter depends on craftiness more than anything. Look at how Tiago uses the rim to protect the ball and finishes with a reverse layup. 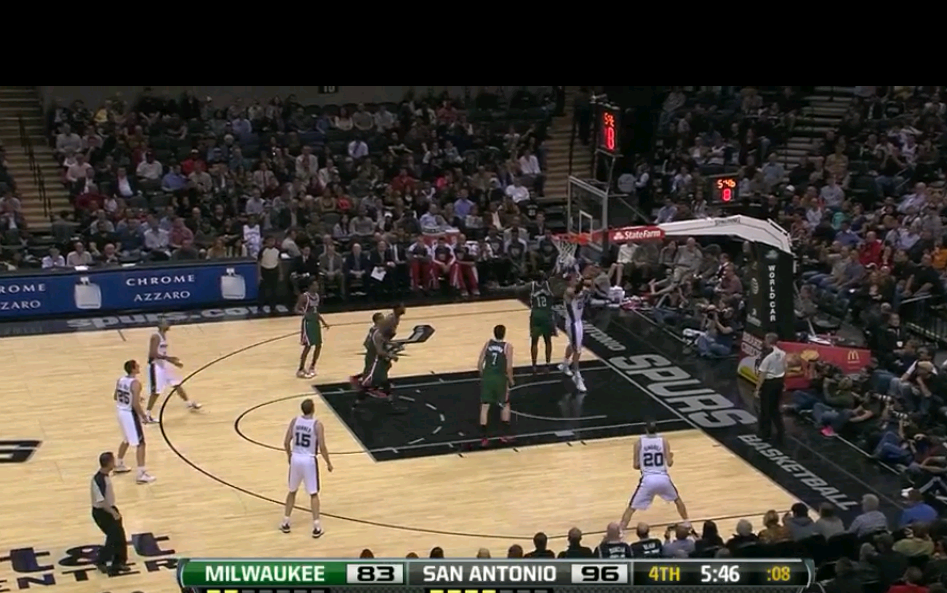 By now that move has become sort of a joke among Spurs fans--the reverse layup is the new dunk--but Splitter uses it because it makes it extremely hard to block his shot. See how far Mbah-a-Moute is from actually altering that attempt.

Even more impressive is how well Splitter adapts to the different styles of ball handlers. Let's have a look and keep in mind every single one of these plays ends with Tiago scoring off the pick and roll.

When Tony Parker is calling for a screen Splitter knows he needs to get him past the primary defender. 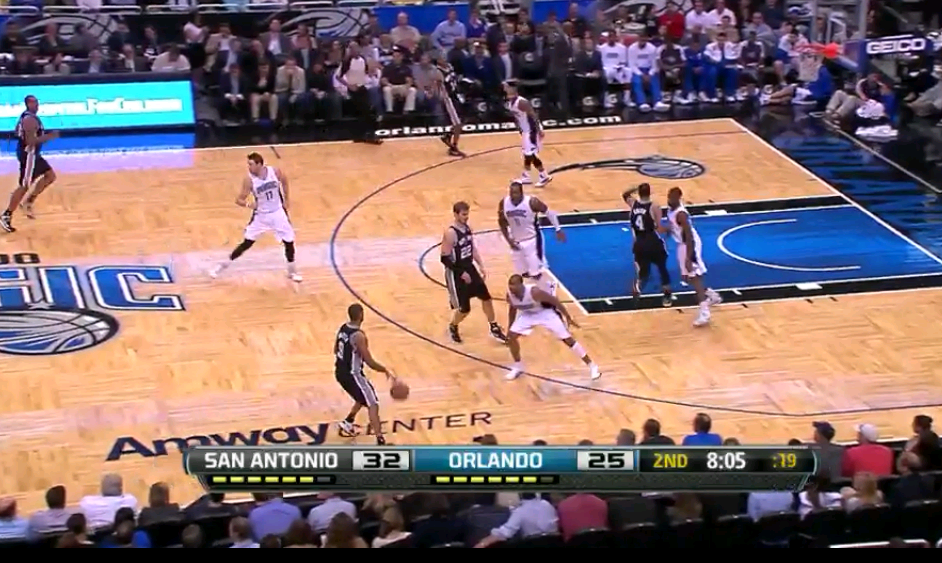 Teams don't usually go over the screen on Tony since he doesn't have a reliable three point shot off the dribble, so the screen has to be sturdier in order to take the secondary defender out of the picture. 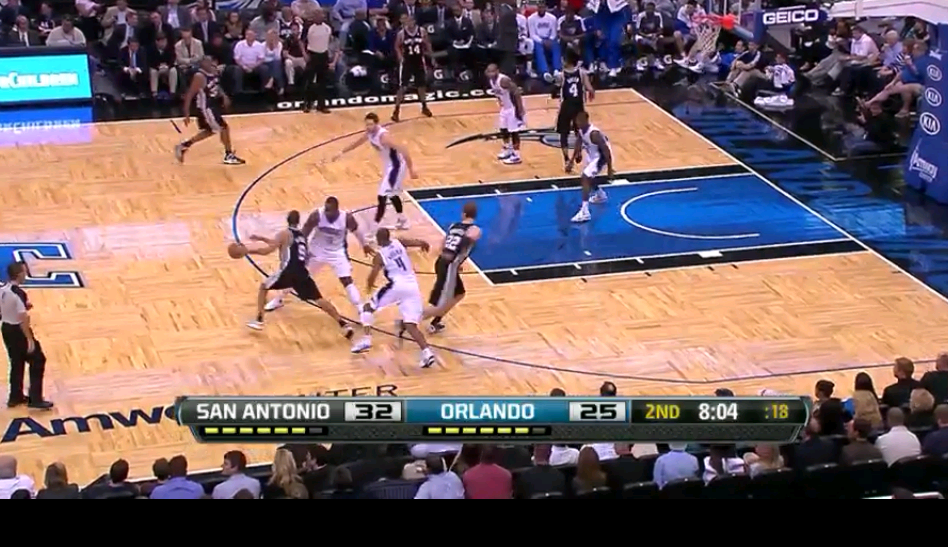 That means Splitter needs to wait a bit before diving into the open space. He has no problem doing that, as demonstrated above.

When Manu Ginobili is running things, Splitter just sets a soft screen or even slips it and knows Ginobili will get him the ball. 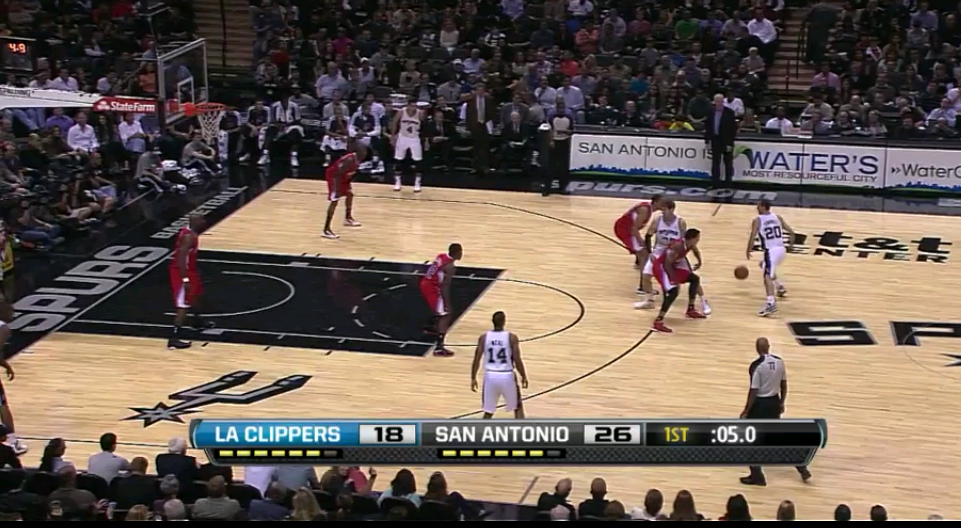 Teams need to respect Manu's three point shot and, considering his height and creativeness, he can get him the ball in a lot of different ways, which means there's no need to wait; it's screen and instant roll and Splitter does it perfectly, as you'll see below. 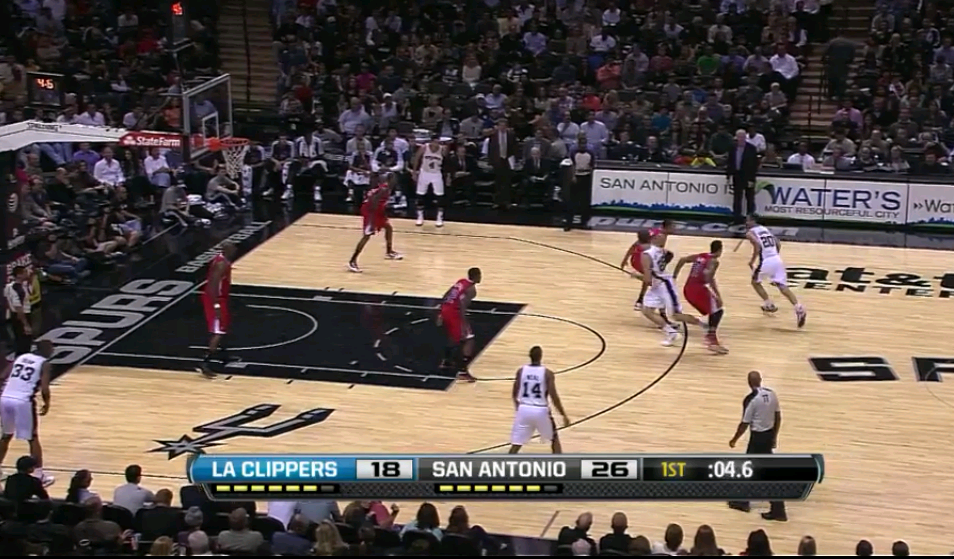 Manu also loves to get on some pick-and-roll action in the secondary break and Splitter knows it and usually starts sprinting up court to get in position to set a screen early in the shot clock. 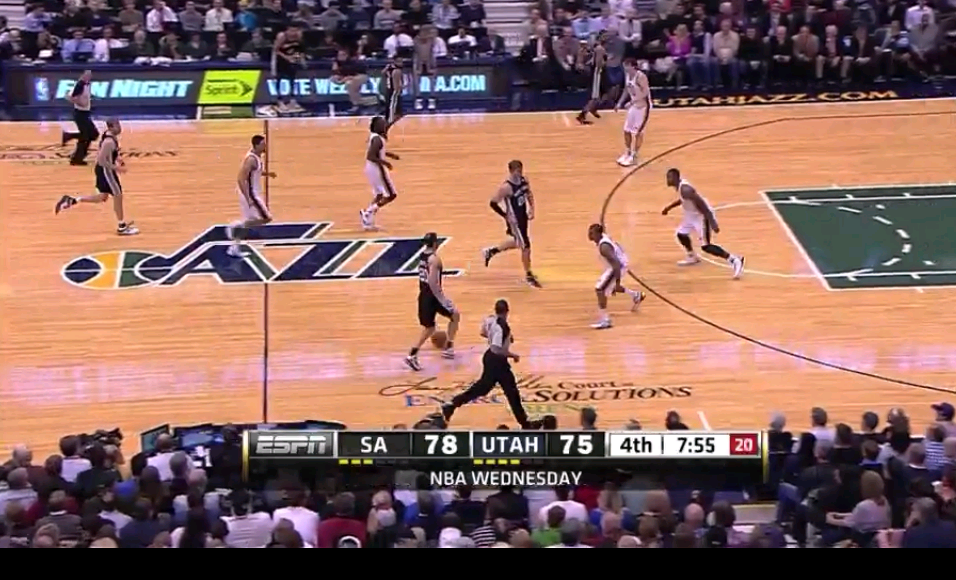 It allows the Spurs to attack before the defense is settled and Splitter to feast on open lanes to the basket. 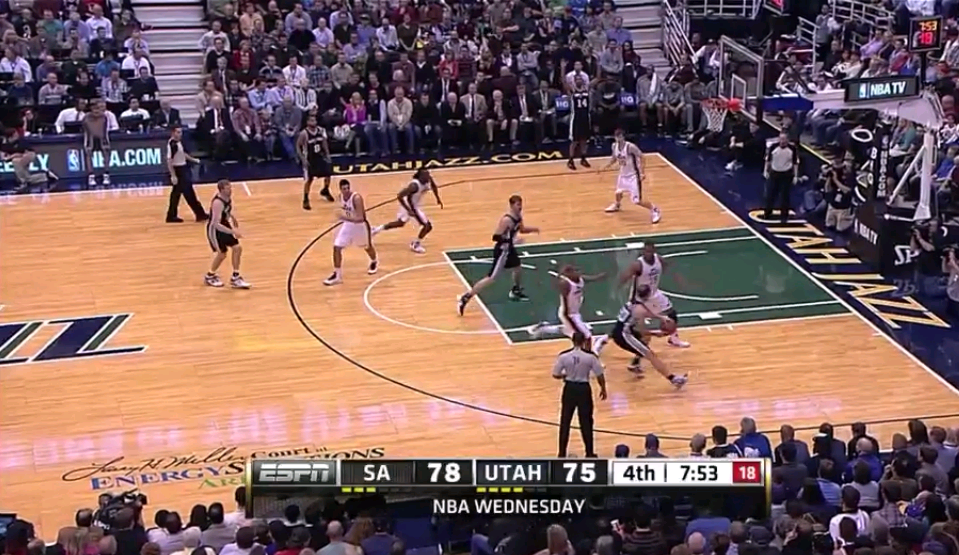 Splitter doesn't always try to make himself available in the same way; that's what differentiates him from the multitudes of pick-and-roll reliant big men. He's the perfect partner on the pick and roll, whether he's screening for Gary Neal, who isn't particularly accomplished running the P&R, or an expert, like Parker, Ginobili or Nando De Colo. He adapts and makes life easier for whomever is trying to feed him the ball, which makes him versatile even if he depends on others to feed him the ball. And that's why Tiago Splitter is a master screener and diver in the pick and roll.