We all know that the Spurs play much better against bad teams than against good teams. I was curious to see, how this correlation can be shown graphically. So I looked at the season records of the Spurs opponents, comparing these records with their performance against the Spurs. As a measure of their performance against the Spurs I chose percentage of the points they scored in the games they played against SAS (of course, you win if you score more than 50% of the points). As a measure of their overall success I took percentage of the wins in the season so far. I plotted these numbers versus each other and looked at how they are correlated. Here is what I got for the Spurs: 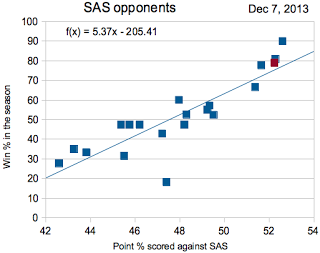 The correlation is almost unreal. Four teams who have beaten the Spurs have the highest percentage wins in the season. Teams with the worst records have scored the least percentage against the Spurs. The only exception is Utah, who fared much better than would be expected based on their horrible record. The rest of the teams lie very close to a straight line showing the correlation. Just for fun I added the Spurs themselves to the plot (dark red square). Point percentage was calculated in this case over all 19 games they played so far. As can be seen, the Spurs point lies very close to the correlation line as well.

For comparison, I made the same plot for the Spurs archenemy. Here is the plot: 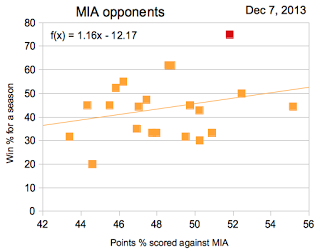 As you can see the guys from South Beach Kingdom win and lose much more chaotically, so any correlation can be barely seen. Also, one may mention that they didn't play any teams with records as good as the four teams who have beaten the Spurs so far. It's nice to be in the Leastern conference, and play against weaker opponents night in and night out.

Even though I am way too lazy to make such plots for the other 28 teams of the NBA, I doubt that any other team is as consistent as the Spurs. I also doubt that even the Spurs can sustain such consistency for the whole long season. More likely they would beat some of the contenders, while losing to some lottery teams. Nevertheless, for now the Spurs confirm what everyone knows about them: they play consistently and so are boringly predictable in their regular season results. They can be beaten, but they are not going to beat themselves. Hopefully, this is a good thing and prediction for a good season, if we can keep winning against every team with win percentage below 60-65% for the season.