If you're interested in getting into the AT&T center early enough to watch each of the Spurs get in their pre-game workout. If you'd like to get onto the court after the game and shoot a free throw. And if you don't mind watching a Spurs vs. Toronto Raptors game in between. Then this is the ticket deal for you.

And all you have to do is go to here, enter promo code PTR, create an account, and choose your seats from four different price levels: three lower level options ($155, $95, $75) and one upper level option ($35). Purchase as many tickets as you like, up to 10, and you will be contacted about your exclusive passes for Courtside Experience and Post Game Free Throw, which are included in the price. Not to mention the Spurs holiday t-shirt you will receive.

In addition to the Raptors game, Pounders are being offered the discounted ticket price, the t-shirt, and the courtside passes, but NOT the free throw after the game, to the December 29th game against the Sacramento Kings.

December also has Spurs' rivals, the Oklahoma City Thunder and the Houston Rockets coming in to the AT&T Center to battle the Spurs. Pounders are able to get discounted tickets for these two games. These match-ups between contenders in the West are sure to be intense, so get out there and support your team. If you want the tickets for either of these two games follow this link, spursgroups.com/ptr6, enter promo code: PTR, create an account, and select which tickets you want.

If the links above don't behave as I've described, or is you have any questions or concerns, please contact the man who helped PtR set this up, Spurs representative Danny Farias at 210-444-5607 or dfarias@attcenter.com.

So click on this pic and get your tickets now. The rest of the £ers, and I, will see you there. 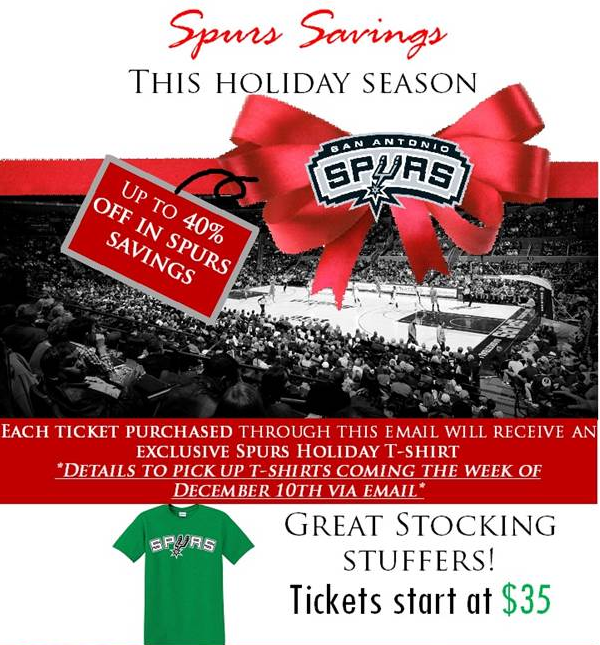