Why it's good that the Spurs experiment with their lineups

Gregg Popovich keeps experimenting with matchup-dependent starting lineups, looking to improve the Spurs' versatility with the playoffs in mind.

Share All sharing options for: Why it's good that the Spurs experiment with their lineups

The Spurs changed their starting lineup once again against the Houston Rockets, choosing to start Boris Diaw in place of Tiago Splitter. We've covered this before here, and it's something I'm planning to keep an eye out for all season long because it's fascinating. I know the reaction of some fans might be similar to Fred's, who in his recap wrote:

Why isn't Tiago starting as he has for the last 400 days? Pop started Diaw instead of Tiago tonight, and it didn't pay off at all. I hate it when any coach adjusts his lineup due to an opponent. I just feel that you have to ride your best starting lineup regardless of the opposition. If you're going to lose, lose with your best guys.

That's an understandable position, but I think the key here is that there are no clear-cut best guys for the Spurs, beyond their top four of Duncan, Parker, Ginobili and Leonard. With Diaw playing so well this season, the difference between him and Splitter mostly comes from their contrasting skill sets. So it does make sense to use one or the other more as the matchups vary.

It made sense to start Diaw...

So why start Diaw against the Rockets? With Asik now coming off the bench, the Rockets have Terrence Jones stretching the floor. That would mean Splitter would be out of the paint and unable to provide his elite rim protection and post defense. It's not that Splitter can't check Jones outside; it's just that it basically takes him away from doing what he does better than Diaw. So, on the defensive end it made sense.

Equally important however was the necessity to prevent Howard from "hiding" on Splitter when the Spurs had the ball. By starting Diaw, the Spurs forced Howard to play away from the basket. When he sank to the paint, the Spurs - and Duncan in particular - had open shots like these early in the game:

Out of a motion strong set:

Out of a pick-and-pop:

The Spurs love to get Duncan touches early in games, and the tweak in the starting lineup helped them do just that. With Howard on Splitter, the guy guarding Duncan could choose to stay with Tim, as Dwight would have been under the basket to contest a Parker shot.

After Diaw went down with an injury, he was replaced in the starting lineup for the second half by Bonner -- and I was ecstatic. Stampler, on the other hand, wasn't:

My reference to the infamous Game 6 is pointed, because the small-ball Rockets gave us yet another installment of Tiago Splitter: backup center. This guy has been the key to our defensive dominance all season long, and again Pop doesn't trust him against a team playing a stretch four. It's one thing when Boris Diaw is the viable alternative and quite another when it's Bonner. Give me Splitter over Bonner, regardless of which five guys are on the court for the opponent - all day, every day.

Oh man do I disagree with this. In fact, I would have loved for Bonner to start and play the first five minutes of each half. I think everyone agrees by now that Bonner is just a specialty big that should only play under certain specific circumstances. This is one of those circumstances.

As maligned as he is, Bonner is (out of necessity) a very fundamentally sound defender. The numbers have backed this up for some time now. There might have been some trouble on the defensive boards had he played more, but on offense, he could have made a difference. With Bonner out there, the Rockets' suspect defense would have been stretched razor-thin. Spacing was a problem early on, with Houston defenders playing off Leonard and Diaw and packing the paint - as you can see in that second screen grab - and swiping at the ball during penetration attempts. That wouldn't have happened with Bonner in there. And by having Diaw off the bench, he would've been able to attack Omri Casspi on the block when the Rockets sent their subs in.

I'm obviously not advocating for Bonner to get more minutes regularly but, in certain situations, it makes sense to play him sparingly. Against teams with traditional lineups, Splitter should obviously start. But when teams use stretch fours, Tiago should probably either be on the bench or consistently getting the ball in the block to try and take advantage of the smaller guy. Since Pop seems to feel that doing that would kill the offense, he sits him. The fact that Tiago is making $10 million this season should in no way dictate what his role should be -- and fortunately Pop realizes that. I don't have a problem with it, but I do have a suggestion for those type of matchups.

Leonard should play PF against teams that go small

With Leonard at the four guarding Jones, and Belinelli starting and guarding Parsons, Danny Green would have been allowed to check Harden and do what he does well: on-ball defense. Green is well below average defending away from the ball, as he over-helps and can't recover. With Kawhi drawing the assignment to guard Harden, Green had to take Parsons, who waited for him to over-commit... 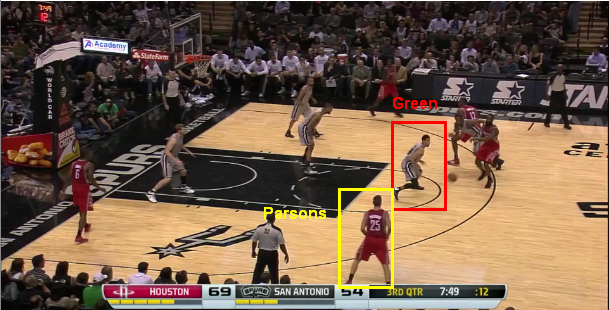 ...and attacked the driving lane, forcing everyone else to collapse.

Green allows a terribly high 1.27 points per possession on spot-ups, which ranks him 168th in the league. He ranks 22nd in PPP allowed to the pick-and-roll ball-handler. So if Leonard is taking the other team's best perimeter scorer, Green is superfluous and probably should sit in favor of Marco, who fares significantly better guarding spot-up players. The Belinelli-Leonard pairing has yielded very similar defensive results (in a smaller sample size) to Green and Leonard, so maybe the next adjustment could be sitting Green against certain teams. Either that or, as I mentioned, the Spurs could move Leonard to PF and play the three together.

And it wouldn't help only the defense, either. By moving Leonard to power forward more often, the Spurs would also be able to side-step the elephant in the room: Kawhi's disappearing outside shooting. Stampler wrote this in his piece defending Leonard:

The three-ball isn't Leonard's specialty and I don't particularly want it to be. I think the strength of his game should be closer to the basket, posting guys up, getting second chance points and just generally operating around the paint. It's the same reason I'd rather have him on the business end of the pick-and-roll than the decision-making end far from the bucket.

I agree with that completely, but guess what? Pop doesn't. Leonard is not getting plays called for him and when he does, they usually end with him taking (and to be fair, making) long twos. If we add all the shots he's taken as P&R ball-handler (11), in ISOs (16) and in the post (16), they are still less than the total of his spot-up attempts (60). For all intents and purposes he is a spot-up shooter and spot-up shooters need to hit open threes. The fact that Leonard doesn't seem able to this season is definitely a problem.

I'm confident Kawhi will work on his shot and go back to being at least a league-average shooter and slightly above average from the corner. That would be enough to stretch the defense and attack close-outs. But in the meantime, seeing some time at PF in small lineups could be a great way to take advantage of what he does well. Kawhi would have little problem beating his guy down the court for transition opportunities, and by forcing a slower guy to guard him along the perimeter, he might be able to drive by him and draw fouls. Plus, on defense, he would be an upgrade over Bonner and Diaw.

While I get the concern about lineup-shuffling, I think the Spurs need to continue to do it -- not only to mend some of the things that aren't working now but also to get ready for the playoffs, where good teams will force the Spurs to adjust, whether we like it or not.

Stats courtesy of NBA.com/Stats and MySynergySports