On New Year's Eve, the San Antonio Spurs dismantled Jason Kidd's Brooklyn Nets, 113-92. The Spurs blew it open early and the Nets were unable to mount a comeback.

Well, Happy New Year! Hours before 2013 ended and 2014 began, the Spurs played the Brooklyn Nets. I'm going to reason with you for a second. This was more the Varsity beating on the JV than an NBA game and I've got places to be and things to drink so I need to be quick with this one. The game went as anyone that follows the NBA would have thought. Here is your recap: 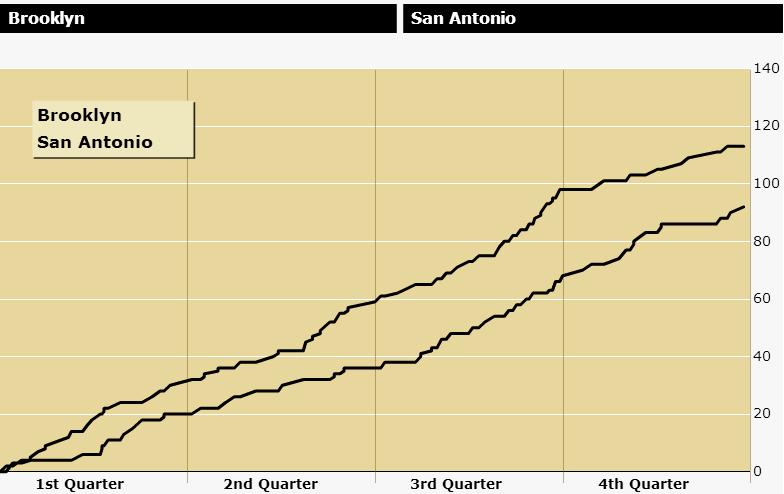 As you can see from the game flow, the Nets are as terrible as Kevin Garnett is crass. This game was never in question. From the opening tip it was very evident that the Spurs were going to win this one easily. The Nets have many problems. Their main one is that most of their players are five years past their prime.

KG is 37. Paul Pierce is 36. Joe Johnson is 32 but plays like a 40-year-old. Deron Williams is not a spry 29 and started limping in the second quarter, which is par for the course. And our favorite, Jason "The Turd" Terry, is 36. Their team was simply too slow to compete tonight. Combine their lethargy with their lack of desire and it just was no contest.

The season was going about as awful as possible before the Nets lost their most productive player, Brook Lopez, for the season. Now, as Mike Craven wrote in the preview, they are a 183 million dollar dumpster fire. It's a complete disaster. Saying that Kidd has lost complete control of this team would be misleading because it implies that he at some point had control. All of the Nets played as if they had somewhere they'd rather be. The Nets, everyone!