Tony Parker's use of the quenelle gesture and apology

Tony Parker is one of the French athletes who is having to explain their association with the comic Dieudonné, and their use of the gesture he invented.

Share All sharing options for: Tony Parker's use of the quenelle gesture and apology

This afternoon, the Spurs issued the following press release from Tony Parker:

While this gesture has been part of French culture for many years, it was not until recently that I learned of the very negative concerns associated with it. When l was photographed making that gesture three years ago, I thought it was part of a comedy act and did not know that it could be in any way offensive or harmful. Since I have been made aware of the seriousness of this gesture, I will certainly never repeat the gesture and sincerely apologize for any misunderstanding or harm relating to my actions. Hopefully this incident will serve to educate others that we need to be more aware that things that may seem innocuous can actually have a history of hate and hurt.

It's possible that a good number of people reading the above were wondering what in the world was going on. What gesture? What photographs? Who's been harmed and offended?

I'll take you back to the beginning of the story, as I understand it, to explain the personalities and issues involved.

The Spurs take on the struggling, injured and dysfunctional Brooklyn Nets.

Is Nature or Nurture more important in the NBA?

The Spurs ride their Big Three to a comeback win against a surprising Kings squad, but the game's action brough up thoughts about DeMarcus Cousins, Amare Stoudemire and the question of Nature vs. Nurture as answered by the Sacramento Kings.

Dieudonné and the quenelle

In the late nineties, about the time that Tim Duncan and David Robinson were winning San Antonio its first ever NBA championship, a French duo made up of Jewish comedian Elie Semoun, and Dieudonné M'bala M'bala, according to Great Britain's The Independent, worked together to create an "act [that] joyfully exploited, and exploded, racial stereotypes." Dieudonné "campaigned on and off the stage against racism" but mostly seems to have tried to make people laugh.

But he split with Semoun and became increasingly radical in his politics and his comedy. Indeed the two seem to have combined as he staged a series of one-man shows starting in 2000 which allowed him to poke fun at the establishment and, increasingly, Jews. He's been convicted in French courts multiple times for incitement to hatred, and he describes his list of candidates for public office as "anti-Zionist."

Last year he directed and starred in a film called "The Anti-Semite" in which he makes light of Auschwitz and rants throughout the film about how "the Jews control everything: media, finance, politics - we have no choice, we must exterminate them!" Cannes Film Festival refused to screen it, "citing its policy of banning works that could offend religious beliefs or otherwise stir violence."

In his show, he uses a gesture that he seems to have created by combining the Nazi salute (but bringing the hand down instead of raising it above the head) and the bras d'honneur, meaning "up yours." This new gesture is called a quenelle and there are two schools of thought as to what it means. It's either an anti-establishment reference, or it's an anti-Semitic sign meant to insult Jews.

In something like an anti-social version of planking, it's somehow become a thing in Europe (check out the first few seconds of this French YouTube video) to stand in front of a of Jewish landmark (Auschwitz, Toulouse Jewish School, or a synagogue) and have yourself photographed while performing a quenelle. Two French soldiers were sanctioned after having their picture taken in front of a synagogue while making the salute.

Three years ago, according to Parker, he met and was photographed with Dieudonné making the gesture without knowing about any anti-Semitic undertones. 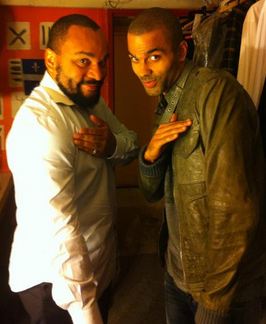 After news broke last week that Dieudonné might be banned from performing his show, a French football player in the English Premier League by the name of Nicolas Anelka scored a goal on Saturday and celebrated by making the quenelle. The league promptly announced that he was under investigation, and he "could face punishment as severe as a potential 10-match suspension."

After Anelka responded by saying his gesture wasn't anti-Semitic but merely a support of Dieudonné, a second EPL star, Samir Nasri, had his quenelle images come to light on Monday. Then came Tony's apology and the subsequent reaction from the American press and Twitterverse.

How does a fan react?

First a few ground rules: Hatred for an entire race, group or country is bad. Holocaust-denying is bad. Belittling the torture and deaths of millions of people is bad. Inciting or encouraging violence against a type of person or someone with a particular heritage is bad. It's wrong no matter the background, race or religion of the person being marginalized. End of story.

Now, I don't want to think of Parker as a hater of anyone, and I don't think that horsing around backstage with a comedian is equivalent to making a statement of support on a soccer pitch in front of the cameras and a full house. I don't think that a lapse of judgement or a bout of naivete three years ago is the same as a tribute to a friend. And I certainly don't think Parker's apology reads anything like Anulka's statement that he stands by his gesture.

I said I don't want to think of Tony like that, but I would if additional actions or words from him showed a serious history with Dieudonné. Yes, I'm aware of the video of Parker this summer after France's win at Eurobasket, where he was asked to show how tall the French president was compared to him, and I don't see a smoking gun there either.

Maybe I'm taking this stance because I'm a fan, and fans are defined by their support. Perhaps I'm so accustomed to hoping that the Spurs and Parker will succeed, that I'm simply transferring that same attitude over into this situation. Perhaps I feel that my enjoyment of the Spurs' success would be diminished if I really believed that Tony shared in the hate-mongering that Dieudonné spews and encourages, and so I unconsciously raise the bar for the amount and quality of evidence I need to see before I think poorly of him.

Regardless of the even-handedness of my powers of judgement in this case, that level of proof has not been met for me. And I hope that there's nothing else out there to be added to case against him, because for now, I'm still fine with continuing to support him. Which is exactly what a fan wants to be able to do.