Without Kawhi Leonard, the Spurs were beaten soundly by the Thunder in San Antonio.

Share All sharing options for: Recap: Spurs lose to Thunder, 113-100

I am going to explain away this loss with the absence of Kawhi Leonard. He missed Saturday night's bout against the Oklahoma City Thunder due to a dental procedure. I think not having Kawhi Leonard against the Thunder is just as impactful as not having Tim Duncan, Manu Ginobili and Tony Parker against the Warriors. In fact, it may have put the Spurs in an even worse hole. Without Kawhi, the Spurs faced the Thunder without their best perimeter defender.

Buy discounted tickets to Monday night's game, receive free passes to enter the arena early to watch the teams warm up, shoot a free throw after the game, receive a special Spurs holiday t-shirt and hang out with your fellow £ers afterwards.

More than that, it took away the Spurs' defensive flexibility for the night. Some may argue that since it was Westbrook, and not Durant, who torched the Spurs, Leonard's presence wouldn't have been a difference maker. But I say that if Kawhi had played, Pop would have certainly switched him to Russell after his hot start which would have forced the Thunder to find a different way to attack the Spurs.

Instead, Westbrook was left unchecked and he had his way with the Spurs for the entire 48 minutes. Without the defensive flexibility that Kawhi allows, the Spurs were left with zero options to curtail his hot shooting. And so, this admittedly biased observer will give the game a grade of incomplete. I don't think you can use this contest to add to the talking head headline, "The Spurs can't beat elite teams this year." [Editor's note: Not that that will stop them. -jrw] 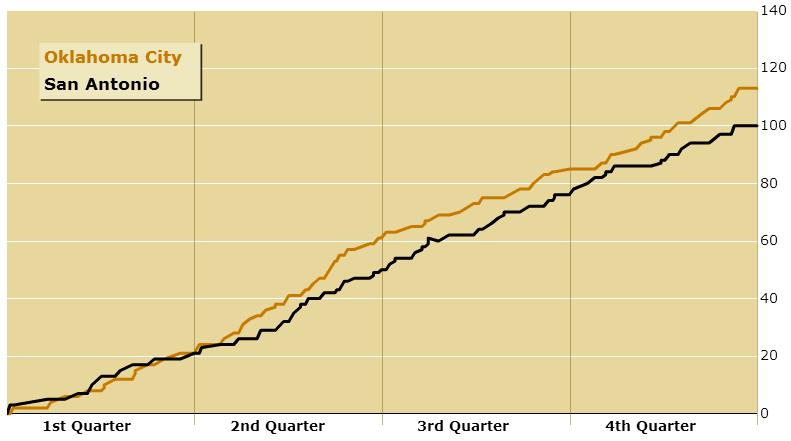 Why is Danny Green struggling on offense?

Danny Green's three-point shooting turned him into a core player for the Spurs but he is not having a good year from distance. Has anything about IcyHot significantly changed, or are his problems mostly caused by factors beyond his control?

Keep calm and Kawhi on

While his incredible Finals performance may have whet Spurs fans' appetites a bit too soon, there's plenty to like in the young forward's somewhat underwhelming third season.

Why is Danny Green struggling on offense? Keep calm and Kawhi on

As you can see from the Game Flow, the Spurs were down just about the entire game and were never able to get over the hump. The Thunder deserve credit for controlling the game from start to finish. Every time the Spurs made a run, the Thunder responded before the Spurs could capture any momentum. It was an extremely frustrating game to watch.

Russell Westbrook and Reggie Jackson took turns torching the Kawhi-less Spurs all night. Westbrook finished with 31 points and eight assists while Jackson scored 21. Jackson scored 23 in his last meeting with the Silver and Black on November 27th. Keep in mind that while Reggie has been great for the Thunder this year, he only has two 20 point games this season and both were against San Antonio. So he's not as great as you might think. He just played two of the best games of his career against the Spurs this year.

There's really not much worth recapping in my opinion. The Spurs found themselves down double digits early and while they didn't give up, the Thunder never let the Spurs get over the hump. Again, this would have been a completely different game if Kawhi Leonard hadn't sat out. By the way, "dental procedures?" What? Did he have his wisdom teeth taken out? Are you telling me that there wasn't a more opportune time for him to see the dentist? I'm just speculating, but I would have loved to know that Kawhi was going to miss this game before I spent money on floor seats. I'm a little bitter, if you hadn't noticed.

Marco Bellinelli and Boris Diaw followed up their strong performances against the Warriors with great games against the Thunder. Marco scored 17 points, making five of his eight threes, and Diaw had 14 points on six of nine shooting. Unfortunately for the Spurs, they were the only ones who really played well.

Tony Parker finished with a respectable 23 points and eight assists, but he looked very rusty to begin the game and missed a bunch of easy shots that he normally converts. That's basically how the Thunder were able to build their early lead that they never relinquished. Tim Duncan had a solid performance with 17 points and 10 boards, but he was fairly quiet all night and clearly his performance wasn't enough to get the Spurs a lead.

Danny Green did what he could in defending Durant, but he was simply overmatched and Durant got his shot off whenever he wanted to. Durant didn't have to take the game over since Westbrook was essentially unstoppable all night, but I felt as if he could have scored any time he wanted to. Patty had an off-night shooting just one of six from the field. His shots were just barely missing. There were a few threes that went in and out in the fourth that could have changed the game.

And so, your Spurs fell to 21-6 on the season while the Thunder improved to 22-4. It's disappointing, but there's still a long way to go and with any luck the Thunder will drop a few games soon so the Spurs can catch them. As I mentioned, I don't think you should take too much away from this game. Without Kawhi Leonard, the Spurs just aren't capable of defending a team like the Thunder. Next up, the Spurs will take on the Toronto Raptors. Expect the Spurs to pummel them.