Kawhi Leonard was out with a tooth injury, Reggie Jackson continues to play like an All-Star against the Spurs and Derek Fisher was in town. Other than that it was a great night.

You smell that son?  There's a rain comin'.  You see, first you smell the rain in the air.  Then you hear the thunder. Then the sky opens up and it pours down on you.

Buy discounted tickets to Monday night's game, receive free passes to enter the arena early to watch the teams warm up, shoot a free throw after the game, receive a special Spurs holiday t-shirt and hang out with your fellow £ers afterwards.

Kawhi Leonard was a late scratch so Pop and the Spurs had to scramble to come up with a game plan to contain Kevin Durant.  They were relatively successful in slowing Durant, holding him to 4 points early and finishing the 1st knotted at 21. But the smell of rain was in the air.  Marco Belinelli scored 11 of the Spurs 21, including a three pointer that I swear he made from the stands, but you knew it was coming.  Unless Marco could score 60 against OKC, you knew it was coming.

Then the thunder rolls

The Spurs put on an impressive display on the offensive end during the 2nd quarter. They scored 29 points, shooting 52.9% from the floor.  The only problem was the Thunder shot 70% from the floor (ok, ok, 69.6% but still) and scored 40 to take an 11 point lead into the half.  Reggie Jackson led all scorers in the 2nd with 10 points and 3 assists.

The Thunder held the Spurs at bay during the 2nd half and it just never felt like the good guys could get over the hump.  It was raining buckets, and the Spurs only had some Dixie cups that Danny Green brought to the Christmas party to bail water.  It didn't work and the Thunder left San Antonio with a 113-100 win.

I got no clue. I haven't even thought about it. I don't want to think about it. It scares me. -Coach Pop on who would replace Kawhi in the line-up.

Spur of the moment

I just knew early on that Marco would walk away with this, but after his fast start, he faded.

Tony was Tony, with 23 points and 8 assists, but I'm going to give this to Boris Diaw.

He had 14 points, 5 rebounds and 5 assists and he made a couple of buckets early in the 4th that really got the crowd back into the game and closed the deficit to within 3. Plus I just like the way he sits on the scorer's table rubbing lotion on his hands.

11: Points from Marco Belinelli in the 1st quarter.

6: Points from Belinelli in the final 3 quarters.

$175: Amount won by the guy in the HEB beach ball drop in the most inept effort I've ever seen. No offense if you're a PTR reader, but that was anemic.  CATCH THE BEACH BALLS, BRO.

17: Points from Kevin Durant.  The Spurs did a great job of keeping him in check considering most were expecting him to set the NBA scoring record tonight since Kawhi was out with a tooth.

0: Minutes from Jeff Ayres.  I don't know why he didn't play.  He was there in the pre-game shoot around, doing his monster dunks and signing autographs.

*estimate because I was driving

59%: Russell Westbrook's shooting percentage in the game, his best effort ever against the Spurs.

So of course Pop sat him and gave him some words of encouragement. 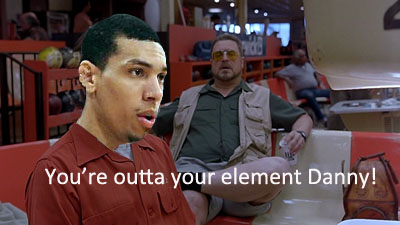 Tweets of the night