The Spurs need to improve their shot selection

The Spurs have uncharacteristically been taking too many inefficient shots to start the season and it has wrecked havoc on their once elite offense.

Share All sharing options for: The Spurs need to improve their shot selection

The Spurs sit at the top of the Western conference with a 5-1 record after winning a low-scoring affair against the Curry-less Warriors, but I doubt anyone believes the team is at its peak, especially on offense. Even before yesterday's brickfest, the Spurs were averaging only 100.8 points per 100 possessions on 53.3 True Shooting percentage after boasting a 105.9 offensive rating on a 56.8 TS% last season. It's still early enough in the season to fix what's ailing the San Antonio's offense, so I set out to deduce why the Spurs are not scoring as prolifically and efficiently as they have in the past.

The Spurs are taking too many mid-range jumpers

This has been simmering in the back of my mind for some time, but this recap by the always excellent Dave Deckard from Blazers Edge brought it to the forefront and propelled me to do a little digging. So far this season, the Spurs have taken an average of 19.6 shots per game from 16-24 feet after averaging only 13.2 last season and 13.5 the season before that. Due to the tiny sample size, which can easily be skewed by a single game, it's tempting to dismiss these numbers. However, watching the games and knowing the players' tendencies, I could see this becoming a real problem.

Not all mid-range jumpers are bad

Tony Parker and Tim Duncan will take mid-range jumpers because it's a part of their offensive strategy. Unfortunately, Timmy is struggling in catch-and-shoot situations right now, taking six such shots per game but only connecting on 33% of them. That number needs to improve, but Duncan has always had the ability to resolve his shooting woes quickly. Tony, in the meanwhile, is currently one of the league's best pull-up guys, leading all players with a minimum of five pull-up jumper attempts per game at a stellar 56.3 field goal percentage. The problem isn't those two but the role players around them.

Danny Green is being chased off the three-point line, and without sufficient handling or finishing abilities to be a serious threat to drive all the way to the basket, his best option is often pulling up for a long mid-range jumper. Again it's still very early, but he is averaging 1.3 shots from over 16 feet per game, which almost doubles the average from last season (0.7). The problem is that he is not very good at hitting these shots, as his 37.5% field goal percentage reveals. Fortunately, Green is going back to what works, as this fantastic post by Stampler clearly shows.

Leonard, for his part, is going through the growing pains that come with taking on a bigger role. When Leonard is forced to create, he simply uses a screen, takes a couple of dribbles and pulls up.

Or, he starts his drive, stops, and pops.

While Leonard excels at hitting long jumpers (50% on 14 attempts from further out than 16 feet), his inability to attack the rim off the dribble in half-court sets keeps him from getting to the line. So far he has taken only seven free throws in six games, which is beyond terrible. With Duncan and Ginobili also having a hard time getting to the charity stripe, the Spurs' bottom ranking in Free Throw Rate is hardly a surprise. Yes, they're dead last. And those numbers would be even more anemic if not for the efforts of Tiago Splitter and Tony Parker.

While he is clearly struggling from the field, Ginobili is being smart about his shot selection, taking 71.1% of his total shots either from beyond the arc, or at the rim. Belinelli, on the other hand, takes a lot of very long two-pointers for no reason at all. An alarming number of them is caused by his failure to simply step outside the arc.

Belinelli is pulling up after a screen by Splitter, but instead of setting his feet outside the arc, he steps on it.

Here it is again, this time against the Lakers:

This one is closer, but it was counted as a two-point attempt:

There are more cases like that, and they appear to be caused by Marco's lack of focus on the location of his jumpers. Chemistry with the screeners, who might not be setting the picks high enough, could also be part of the problem. If that's the case, repetition will probably help him clean that up.

But then again, how do we explain this next example?

Belinelli is curling off a Splitter screen, which traps his defender, allowing him to catch the ball unguarded around the arc. 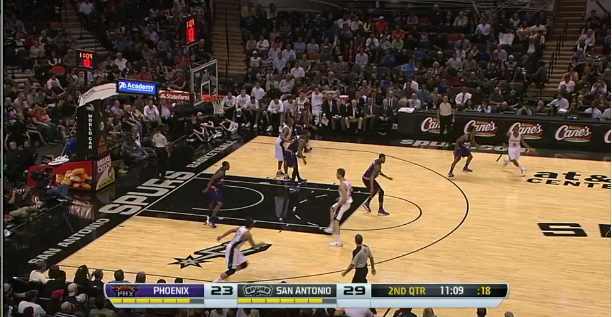 He has enough time to pull for a three, yet he continues to curl, instead of stopping and launching, and takes the jumper near the top of the key.

Next is a play with Ginobili attracting all sorts of attention on the secondary break, and Marco makes the right read by heading for the corner. You can see Green and Mills also setting up for the kick-out.

Manu draws the defense in and passes to a wide-open Marco... who takes a very long two instead of a corner three. 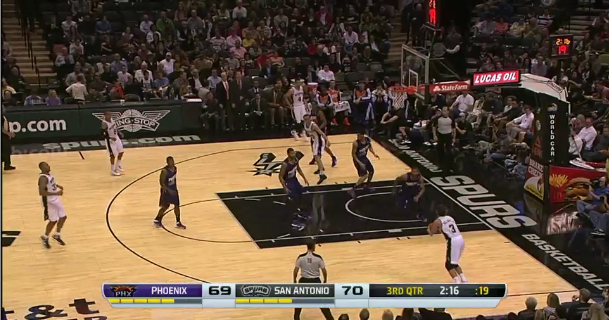 The most damning evidence of Belinelli's seeming preference for long deuces comes from this play, in which Diaw runs the secondary break and finds a wide-open Marco...

...who once again goes out of his way to move inside the arc and take a two instead of a three.

Those are all from the Suns game, but there are plenty of other examples. This time it's Boris Diaw's turn to do the exact same thing, even though he gets open through the Spurs' clever playmaking. Here you see how the Spurs use two screens by Parker and Ginobili to seal off Kenneth Faried, while Diaw gets open.

Yet, Diaw catches inside the arc and even takes a dribble forward instead of outside the three-point line before pulling up.

In this one, Leonard sets a screen under the rim and catches Diaw's man, while Diaw moves to the top of the arc.

Duncan is there to provide another screen, so Diaw has time. And again he catches inside the arc and takes a long two-pointer instead of a three.

Unlike Belinelli, who actually struggles to hit those long two-pointers, Diaw is averaging a decent 41.7% on shots between 16 and 24 feet and only 30.8% on three-pointers. However, 30% on three-pointers is better than shooting forty-something from elsewhere, as Boris got 10 points on 12 attempts from 16-24 feet and 12 points on 13 shots from downtown. Why Pop is not cracking down on all these mid-range jumpers is beyond me, but the Spurs absolutely need to start taking more efficient shots.

It might be too soon to be overly concerned about this issue, but it's certainly something to keep the eye on as the season progresses. For several years, it was the defense that was keeping Spurs fans up at night. Now that San Antonio is back to being among the elite on that end, it would be a shame if the stunning offense of the past two seasons got all mucked up.

Stats and video courtesy of NBA.com/Stats