The Spurs gear up to match up against the slightly revamped Golden State Warriors for the first time this season.

Most Spurs fans understand that the window for this era of San Antonio dominance in the Western Conference is beginning to close and the main reason may not be age but the team that is visiting 4-1 San Antonio on Friday night. The Golden State Warriors, also 4-1 on the season, are the new darlings of the NBA, and unlike some "hot" teams that end up as mere flashes in the pan they look to be the real deal.

How Danny Green got off the schneid 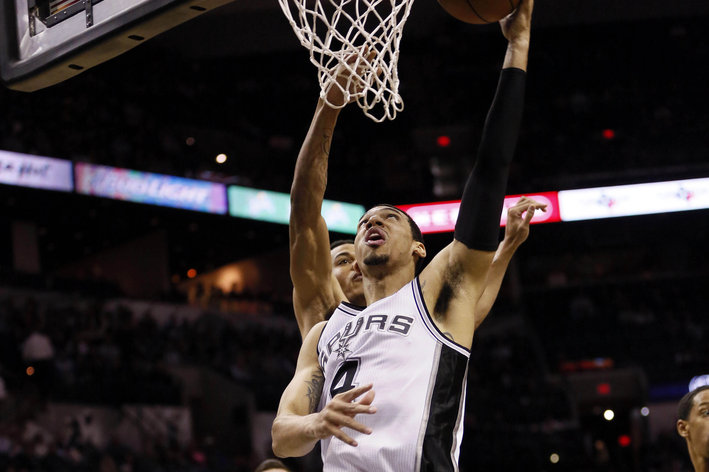 IcyHot was living up to the chilly side of his nickname through the first four games of the season, and the ways the Spurs helped him get going were varied, clever and sustainable.

For the Spurs, this is another early look at a team it bested in last year's postseason. San Antonio knocked off Golden State in six games last year, but even that series was a glimpse into a possible future where the Warriors become the most-feared team in the West. Before the season, many argued that discarding Jarrett Jack and Carl Landry to make room for Andre Iguodala would disrupt chemistry and prevent Golden State from taking the next step in its evolution towards title contention.

The Iguodala move was also criticized for the possible obstacle it might prove to be in the development of promising young players Klay Thompson and Harrison Barnes, but there hasn't been any sign of that yet. While Barnes has been coming back from injury, Thompson is bordering on All-Star level play thus far this season. After fellow Splash Brother Stephen Curry left Wednesday's game with a minor ankle injury (his words), Thompson went unconscious from the floor in the second half. He scored a game-high 30 points in a Golden State victory over Minnesota with 26 of those coming in the second half and 19 in the fourth quarter. Barnes made his first appearance of the season and impressed in his limited minutes as he works back into game-shape.

Golden State did suffer a scare in the win over the Timberwolves, but all indications are that Stephen Curry will be in the lineup tonight to face the Spurs. We all know about Curry's ability to shoot the ball, but the league should be scared of his evolution as a point guard. He'll probably always be a shooter first, but Curry is averaging 9.2 assists a game this year and just 18.6 points. Curry could try to challenge for scoring titles, but he is buying in to becoming a true point guard under head coach Mark Jackson.

Thompson is starting to carry more of the scoring load as Curry works on running the offense. He's averaging 24 points a game this season and Spurs fans are all too familiar with his ability to light it up from the field when he gets it going. Guarding the backcourt trio of Curry, Thompson and AI will be a challenge for any team in the league, especially when a healthy Barnes gets thrown into the mix.

Golden State isn't just a perimeter team, however. David Lee is one of the best offensive power forwards in the league and his injury in last year's playoffs may have altered Golden State's chances at making a deeper run for the title. He leads the team with 9.2 rebounds a game and helps space the floor for Thompson and Curry with his ability to knock down mid-range jumpers. Andrew Bogut won't win any games by himself, but he is averaging two blocks a game to go along with 6.2 point and 6.4 rebounds a game.

The biggest improvement for the Warriors this year, and the reason I think acquiring Iguodala instead of resigning Jack and Landry, is on the defensive side of the court. With offensive juggernauts like Curry and Thompson, the improvement on defense has been lost to most casual observers. Golden State ranks second in the league behind Indiana in both opponent's field-goal percentage and defensive rating.

Of course Iguodala certainly hasn't hurt them on the other end of the floor either, where they rank first in field-goal percentage and fifth in offensive rating. The result of the team's two-way dominance? A number one rank in overall net rating.

And yes, I hear you, small sample size. But Golden State is riding a three-game winning streak into the matchup with the Spurs and each of those wins has come by double digits. And in those three games, the Warriors have kept opponents to fewer than 40 percent shooting in each. Last season, Golden State did that 19 times all year. The Warriors have already pulled that off four times this season.

The Spurs are back home and finally got an off-day during this five games in seven day stretch. It is a marathon and not a race for San Antonio, but there are early concerns about this team that will be put on display against Golden State if the Spurs continue to start slow and get virtually no production from role players. Tony Parker and Manu Ginobili are carrying this team right now with Tim Duncan doing his usual Tim Duncan things. Danny Green finally broke out in the win Wednesday against a pesky Phoenix team, but it'll take more than just Danny Green, Kawhi Leonard and solid performances from the "Big 3" to knock off this explosive Golden State team, especially if Curry's injury Wednesday night isn't serious. He missed the latter part of the Minnesota game after turning his ankle on Kevin Love's foot, but has indicated that he'll be fine.

Matchup to watch: Golden State has the ability to go big on the wing with the trio of Thompson, Iguodala and Barnes on the floor at the same time with Curry at the point and either Lee (if they really want to go small) or Bogut at center. How will the Spurs match up with that and which players off of the bench will step up on both sides of the court to help defend the multiple lineups Mark Jackson can throw at opponents?

Suns perspective can be found here: Golden State Of Mind