Things have hit a rough patch here at PtR. It's gotten so bad that they have had to ask ol' Big50 to come write a preview. I know you've all gotten used to "good" grammar and proper spelling. I'm sorry you have to slum it with me today, but we'll power through this together. It's likely everyone else is just suffering turkey side effects, and things will be back up to standard soon.

Share All sharing options for: Game Preview: Houston Rockets @ San Antonio Spurs - The Battle of I-10

After dispatching the Magic last night and getting back to their winning ways, the Spurs will face off with the media darling Houston Rockets. Ever since Dwight Howard decided to join James Hardin in H-town, the pundits have been predicting a deep playoff run from the Rockets. That leads me to something I've always wondered, just how does one become a pundit? Does one simply walk into the pundit store and buy pundit credentials? Perhaps it just takes getting put on TV or some highly read blog and spouting off nonsense about a sport you don't watch enough of to be knowledgeable about. Wait....does that make me a pundit? I don't feel like my sentence structure is poor enough to be a pundit. Plus, there's the whole "liking" the Spurs thing which I know is frowned upon for all pundits.

But, I digress. Spurs and Rockets. San Antonio has been so dominant we are surprised when they lose to a Western Conference "favorite". When I say "we," I mean me. I don't want to lump you good people into my preconceived notions of the way games will go. I thought for sure the Spurs would have won the game in OKC given the way they were playing, but as PSherman points out here, losing can be good. Houston has had a taste of losing this season as they sit at 12-5 and have lost some tough games - including an overtime loss to Mavs. Worse yet, 60% of their losses have come to LA teams and that cannot be good for a fan base. All that said, this Rockets team is very good. As well as the Spurs have played, the Rockets are only 2.5 games back and they have the 2nd best point differential in the league.

The Rockets are not without flaws. They are the 4th worst team in points allowed per game. Of course, they make up for it by being the highest scoring team in the league. If they can figure out how to play some defense, they could be a dangerous team when the games count...even more. Of course, a lot depends on if Kevin McHale can coach, which I am still doubtful of. I mean the guy looks like he is in constant need of a nap. I guess it has to be tiring being that big. Maybe it's having to coach Howard that makes him so tired.

Despite the Spurs complete domination of Dwight's Laker team last year, I think Howard might really help this Houston team make some noise in the Western Conference. To be fair, the main reason I think that is because of James Harden. I still can't believe OKC traded him. Harden is a stud and a good teammate in the way that Kobe Bryant isn't - his teammates like him. Anyway, he's going to be key in keeping Howard happy and in helping carry the Rockets when the playoffs roll around. Dwight, despite all of his short comings, is still a very very good player when he's happy and healthy, and I think he's both of those things right now in Houston.

As for tonight's game, it could get ugly. This is a SEGABABA for both teams and it wouldn't be all that surprising if things are sloppy. I mean SEGABABAs are often sloppy and it only makes it worse that these guys will have likely celebrated the American holiday of Thanksgiving (where copious amounts of turkey and sides are consumed), and that tends to make one very sleepy. Clearly this gives the Spurs and the Foreign Legion an advantage since all the foreigners surely don't participate in this American tradition.

Of course, Tim Duncan did completely own the Magic last night, so I guess there's a chance that no American player for the Spurs participated in overeating and watching (the American) football tradition two days ago. However, I choose not to believe that. How could that be? That's basically communism, right? I know that the Spurs stand for all that is good in this world, and Thanksgiving certainly falls on that list. I take it back, the Spurs all ate turkey and sides and thus will have the strength to overcome the SEGABABA and defeat Houston. As a side note, in this paragraph that is a side note and really has nothing to do with this game, can we do away with turkey as the "go-to" holiday meat? Brisket, steak, and ham are all better options and the list doesn't stop there. I am sure there are some traditionalists that will claim turkey to be better, but they are just wrong. Seriously, if it was that good, then why then do all the sides get so much glory on holidays? Sweet potato casserole, cranberry sauce, green bean casserole, and pumpkin pie among many others. It's time to end the terrible reign of turkey.

While we all ponder what will be known in the future as "the dark days of turkey", let's look at the actual basketball game going on tonight. Jeremy Lin is hurt, and will be out tonight. My friend, a Rocket's fan, thinks that having Lin out will actually improve Houston's chances tonight. The Spurs will have clear advantages off the bench and at Poing Guard. Tony Parker, assuming he plays tonight, will need to be a big factor. Look for San Antonio to press their advantage when Howard sits, as Asik is a nice player, but he doesn't change games like Howard is able to. Also, Houston is terrific at rebounding the ball, and competing for boards needs to be a focus tonight.

Man, this preview is getting long and I'm likely losing my readership, and thus my pundit-hood. I'll get to our match-up to watch right after I leave this right here: 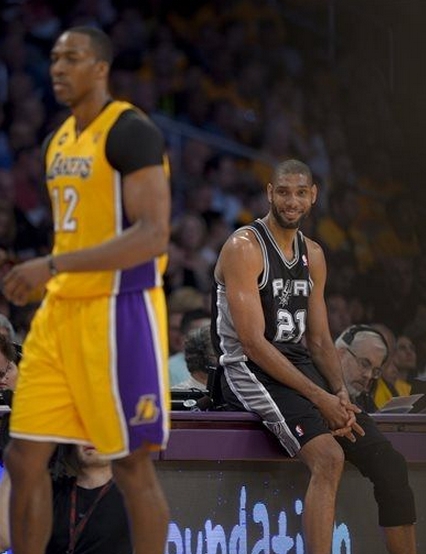 Makes me smile every time (via cdn3.sbnation.com)

Matchup to watch: Kawhi Leonard is going to have to match up with Harden. He did a solid job on Durant the other night, and will have to keep pace with Harden's famous "old man" game. I'd like to see more focus on Leonard's offensive game in match-ups like this. Let's face it, Harden isn't known for his awesome defense. If Kawhi can make players like Harden work on defense, he will only add to the Spurs ability to beat teams who rely so heavily on one or two guys...which is pretty much every other team in the Association. Kawhi must bring his swedge.

Rockets perspective can be found here: The Dream Shake